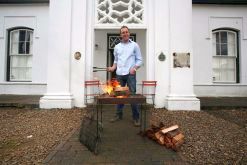 When Jan Scannell was first inspired to
start the initiative, he had no idea
that it would become so popular.
(Image: wired communications) 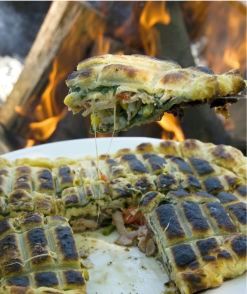 This Saturday, 24 September, thousands of South Africans will head outdoors, get the fires going and celebrate the nation’s favourite pastime on National Braai Day.

This event, which takes place annually on National Heritage Day, 24 September, has become something of an institution in South Africa. Braai Day gives South Africans an opportunity to celebrate the country’s cultural heritage and diversity of traditions.

South Africa is a diverse country, but something that we all have in common is that we need no encouragement to braai.

“We want to create a national day of celebration in South Africa – one day in the year when the whole nation comes to a standstill and has a party. It’s good for nation-building and it’s good for the spirit of the country,” says Jan Scannell (also known as Jan Braai), the founder of the National Braai Day initiative.

The beginnings of National Braai Day

When Scannell was first inspired to start the initiative, he had no idea that it would become so popular. And to give the day even more clout, Archbishop Emeritus Desmond Tutu took to the idea and became the patron of National Braai Day.

“I emailed Archbishop Tutu and explained that I want to unite 50-million people around braai fires. He liked the idea, so we started talking about getting him involved as the patron,” says Scannel. “We had a braai together for the first time in 2007 – boerewors and lamb chops.”

Since then, Scannell and Tutu have been in regular contact and they’ve also braaied together a few more times.

National Braai Day has since become known as the Braai4Heritage initiative and in 2008 the campaign received the endorsement of South Africa’s National Heritage Council.

Recently a local comedy pop duo also got into the spirit of Braai Day by recording a parody of US pop singer Rebecca Black’s viral video hit “Friday”. Since Nicholas Smal and Gareth Allison, also known as Derick Watts & The Sunday Blues, posted the video, it has received overwhelming response from fans and quickly went viral on Facebook, Twitter, and other social media sites.

The parody has become just as popular as the main anthem, but Scannell says that any publicity for Braai Day is welcome.

“We are excited about the support the song has received online so far. As South Africans, we never take ourselves too seriously and the song really captures the spirit of National Braai Day,” he says.

Braaing is very much part of the South African DNA and it should come as no surprise that South Africans have perfected the art of having a great braai. But before you grab the marinade and braai tongs, make sure that the basics are in place.

Mr Braai, who is the authority on everything to do with this form of cooking, explains that a wood fire is the way to go. “I don’t think anyone seriously prefers charcoal. Using it is simply a matter of convenience or if you can’t get hold of wood,” he says.

South Africa’s great braai tradition has been the inspiration for numerous cooking books on the subject. Braai Masters of the Cape Winelands – compiled by Wines of South Africa, a not-for-profit organisation that promotes the export of local wines in key international markets – is a beautiful publication that pays tribute to the country’s beloved pastime.

It contains recipes, braaing tips and techniques, wine notes and wine pairing suggestions from some of the Cape’s favourite vineyards. Estate owners, winemakers and personalities such as rugby player Schalk Burger, also share their secrets for and interpretations of the perfect braai.

The book suggests that the secret of successful braaing lies in controlling the heat and ensuring that it is evenly distributed. Stacking the wood is also contentious, as is the timing around turning the meat.

Everyone has their way of stacking the crumpled paper, kindling, bits of wood and bigger cuts or logs. However, the book suggests that a traditional South Africa square stacking method allows for good aeration and burning, but keep in mind that this method needs careful management to produce enough core heat to generate coals.

If you don’t plan to make your braai fire with such precision, try the well-known tepee style. This method can even be mastered by the novice fire maker as it is more practical and needs less management.

Scannell adds that there is also no reason not to celebrate Braai Day if you are a vegetarian. He says that there are many delicious meals that can be cooked over the coals, such as putupap, mielies and mushrooms.

Braaibroodjies are another favourite. These are toasted sandwiches made with cheese, tomato, onion and a dash of chutney, which can be braaied slowly in a closed grid on light coals until golden brown on the outside and the cheese has melted on the inside.

If these dishes don’t sound appealing, you can still have a good time. “Simply light a fire and stand around it, everybody loves that!” says Scannell.

Instead of putting the usual steak and chops on the coals, try something different this Braai Day. This recipe is courtesy of Braai Masters of the Cape Winelands. According to the book, this dish lends itself to experimentation. The amounts are not exact and you can add more or less of any ingredient, or improvise with whatever you have available for the filling.

Roll out the dough into two equal pieces. Fry the onion, bacon and peppers in olive oil. Add seasoning. Layer the ingredients in the following order on one sheet of dough: half of the raw spinach, smoked chicken, onion, bacon, peppers and mushrooms. Scatter the three cheeses and add the rest of the spinach.

Cover with the second sheet of dough. Make a parcel of the layered, filled sheets of dough. Brush with olive oil on both sides. Place on a hinged braai grid and close gently. Do not latch it, though, or else the pie will get pinched. Cook over the coals for about 15 minutes, turning regularly, until golden brown.

Whatever you do, have a braai

You can barbeque anywhere, but you can only braai in South Africa. So don’t miss out on this Saturday’s festivities.

“All we are saying is grab your friends and family, start a fire, and celebrate South Africa,” says Scannell.