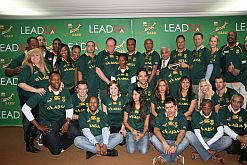 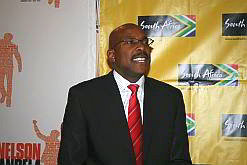 Matola in his Bok jersey “played his part”
to support the Boks.
(Images: Ray Maota)

South Africans have been mobilised to stand behind their beloved Springboks, the national rugby team, as they prepare to do battle in the 2011 Rugby World Cup.

“We are proud of this initiative by Lead SA to garner support for our beloved Bokke and we as the IMC are proud to ‘play our part’ in bringing national pride back into sport,” Brand South Africa CEO Miller Matola said at the event.

Brand South Africa launched its Play Your Part campaign in June 2011 as a call to citizens to do whatever they can, big or small, to try and make the country a better place to live in.

The organisation was in Port Elizabeth on 20 August to support the Boks as they faced New Zealand in a Tri-Nations clash.

The Boks winning the game helped boost national pride – just as the Play Your Part campaign aims to do.

Lead SA also encourages citizens to make a difference in the country whichever way they can.

Matola was joined at the event by Absa marketing and communications executive Happy Ntshingila, Deputy Minister of Sport and Recreation Gert Oosthuizen and Lead SA CEO Yusuf Abramjee, who is also head of news and current affairs at Primedia.

Abramjee said: “With the call to citizens to support the Springboks by wearing Bok jerseys on Fridays, we are also proud to introduce Claudia Nel who won the Pretoria News art competition for Lead SA.”

Nel is a pupil at Hoërskool Menlo Park in Pretoria.

The competition called on South Africans to submit artwork that can be used on Lead SA postcards.

Nel’s contribution, featured on the front page of the Pretoria News, showed a face in colours of the South African flag and the city skyline in the background.

Adding his voice at the Primedia gathering, Absa’s Ntshingila said: “We as Absa have always supported the Boks and there’s nothing bigger and better than getting behind our national teams, as we saw during the 2010 Fifa World Cup.”

Absa was an associate sponsor of the Boks for nine years before being named the official sponsor in March 2011 in a deal worth more than R50-million (US$6.9-million).

The Boks will have a send-off party organised by Lead SA on 1 September at the Nelson Mandela Square in Sandton, where Danny K and La Vuvuzela will perform, among other artists.

DStv’s Supersport channel will show the Rugby World Cup matches live and supply footage to other stations to ensure all 50-million South Africans behind the Boks.

Rugby has played a major transformational role in South Africa after the Springboks won the 1995 Rugby World Cup on home soil.

The impressive victory by the Boks came a year after the first democratic elections in the country, which resulted in Nelson Mandela becoming president.

The shot of Mandela and then-Bok captain Francois Pienaar hoisting the Webb-Ellis trophy at Ellis Park in Johannesburg has become an iconic national image.