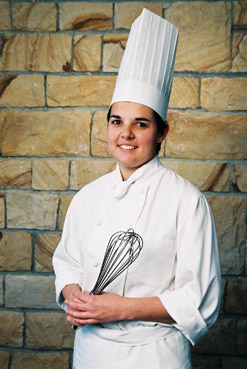 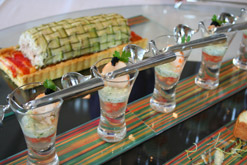 Award-winning South African chef Diane Kay is on her way to the prestigious 2009 Bocuse d’Or international culinary competition, after taking the honours in the South African trials for the event.

The Cape Town-based chef came out tops in the South African Chefs Association (Saca) trials held in Johannesburg in late January – and will be the first woman to represent South Africa in the country’s 20-year participation in the competition.

A high-profile competition for the world’s top chefs, the Bocuse d’Or is held every two years in Lyon, France – the home town of the legendary French chef Paul Bocuse, founder and director of the competition.

The competition is considered the highlight of the annual international cuisine calendar and attracts huge media attention. Those who excel find themselves instant culinary celebrities.

Three other distinguished finalists competed with Kay for the top spot: Cape Town’s Johann Alfred Breedt of the Francois Restaurant in Fish Hoek, as well as Jaco van der Westhuizen of Netcare Linksfield and Abubaker Bagaria from the HTA School of Culinary Art, both in Johannesburg.

Judging fell to Saca board members and former Bocuse entrants Garth Shnier and Dr Bill Gallagher, who is also the association’s honorary president. Shnier will coach Kay in the months leading up to the event.

A graduate of the Prue Leith Chefs Academy in Centurion, south of Pretoria, Kay is currently based at the Frimley Hall Hotel & Spa in Camberley, just outside London.

Having worked in top South African hotels such as the Westcliff and the Michelangelo in Johannesburg, she has won a number of accolades. These include the Nestle Mini-Plated Salon Culinaire (junior section), the 2000 Jeune Commis Rotisseurs (first place in the Johannesburg regional finals) and the Easigas Young Chef of the Year (first place).

Kay’s winning menu at the trials was replete with the rich flavours of Cape Malay cooking – the competition required a South African influence in the cuisine. It included a tomato tart seasoned with spices typical of that culture, fish wrapped in a cucumber lattice, and a tomato essence – a very fine, highly concentrated reduction of tomato – accompanied by riata, an Indian cucumber and yoghurt sauce.

As part of their entry each country is required to submit a poster, which must depict the culture and lifestyle of that particular country. According to a Saca spokesperson, the poster will be designed by students from the University of Johannesburg – and Kay would like Johannesburg’s landmark Nelson Mandela Bridge to be included in the design.

Bringing together chefs from around the world

Whatever a chef’s talents, the only way to gain entry to the competition is by the personal invitation of Paul Bocuse. South Africa has competed in every chapter since the competition’s inception in 1987. In that year Gallagher sat on the judging panel, while Stroebel took the heat in the kitchen.

Entrants first have to win a preliminary competition in their own country. Each competing country may enter only one chef and a commis, or chef’s assistant. The year 2007 saw 24 chefs competing for the grand prize; the South African entrant was Cape Town’s Bertus Basson, with Allistaire Lawrence as commis chef.

Competition for the top prize of the Gold Bocuse d’Or Trophy – and a cheque for €20 000 – is intense. The pressure is on as chefs, working in small open kitchens in full view of the judges, media, and spectators, go all-out to prepare two platters for service to 12 people. They use two specified ingredients and present one platter on each of the competition’s two days. For 2009 the ingredients are cod and lobster for the fish platter and Angus beef for the meat platter.

The chefs are given only five hours to prepare, cook and serve the first platter, followed by the second platter 30 minutes later. The atmosphere is noisy and exciting, with onlookers cheering and chanting in support of their favoured competitor. Horns, whistles, cow bells and rattles accompany the raucous crowds.

The judging panel, made up of representatives from all the competing countries, is divided into two groups – one judges the fish platter and the other the meat.

The Bocuse d’Or 2009 forms part of the 14th International Hotel Catering and Food Trade Exhibition, or SIRHA, and takes place on 27 and 28 January 2009 at the Eurexpo in Lyon.

To date six French, three Norwegian, one Luxembourgian and one Swedish chef have lifted the sought-after Bocuse d’Or statuette. The UK representative on the 2007 judging panel, Brian Turner, believes that the ongoing success of the French at the Bocuse d’Or rests on meticulous planning.

Recipes are developed, refined and practised over many months. Contestants have to supply all the ingredients themselves and consider their mental attitude just as important as the innovation of their recipes, the skill of their techniques and the quality of their ingredients.

About to celebrate his 82nd birthday, Bocuse is arguably one of the most famous French chefs of the twentieth century. A pioneer of nouvelle cuisine, which is less elaborate than the traditional haute cuisine, his restaurant in Lyon has a coveted Michelin three-star rating. Bocuse is considered as an ambassador of modern French cuisine and in 1961 was honoured with the title Meilleur Ouvrier de France, or best workman in France, an honour bestowed on French crafters in all fields.

“What makes the Bocuse d’Or magic is the opportunity to review all the gastronomic cultures of the world in just two days,” Bocuse says. “As the public watches, everyday products become authentic masterpieces. A spell is cast, which will turn three new master chefs into internationally famous names.

“As gustatory artists, chefs have turned their profession into an art – an art they rehearse daily, always aiming at perfection. With their talent and passion, cuisine is celebrated; it’s a show. A symbol of the art of good living, cuisine is universal and knows no frontier. The Bocuse d’Or is an extraordinary showcase where culinary art triumph … This event is much awaited by the greatest chefs in the world. They attend to support all those who undertake the defence of the gastronomic tradition – a tradition that seeks immortality.”