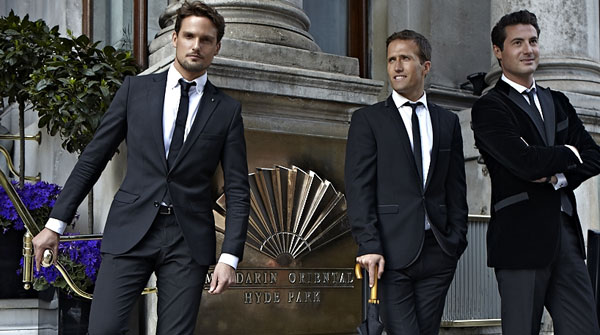 Blake catapulted to success in 2007 with the launch of their first album, Blake. Known for mixing pop, rock and classical music with rich harmony vocals, the public embraced their debut album and over 100 000 copies were sold in just three weeks – earning the four their first gold disc. (Image: Blake)

They will perform on 27 and 28 June, at six locations. The Brit Award winning trio will combine opera, classical, musicals and pop harmonies.

Blake catapulted to success in 2007 with the launch of their first album, Blake. Known for mixing pop, rock and classical music with rich harmony vocals, the public embraced their debut album and over 100 000 copies were sold in just three weeks – earning the four their first gold disc. Their upbeat version of Swing Low was chosen as the official anthem of England rugby that year for the Rugby World Cup.

In early 2008, the album won the prestigious Brit Award for Album of the Year, a huge honour for a group still less than a year old. Also that year, Blake released their highly anticipated second album, And So It Goes. It went straight in at number 12 on the UK pop charts and number one on several classical charts around the world.

Cortes, an Icelandic tenor, was born into a musical family and trained as a singer in Vienna, Copenhagen and London. He has sung various leading tenors in operas, as well as a leading part in The Phantom of the Opera in London’s West End. His debut album in the UK, titled Cortes, was released in 2007 and entered the UK classical chart at number one.

In joining the visitors, the Johannesburg Philharmonic Orchestra aims to challenge the perception that classical music performances are elitist and eurocentric, and appeal rather to a truly egalitarian, local audience.

Blake has a celebrity following of high-profile fans that include the British royal family, Prince Albert and Princess Charlene of Monaco, actors Kiera Knightley, Will Smith, Ewan McGregor, Kevin Spacey and Morgan Freeman, and singer Dame Shirley Bassey – the Blake boys did a special performance at her 70th birthday party.

The group has made over 90 live concert appearances; they have toured China, the Philippines, Russia and the United States, and sung in the Olympic Stadium. Their first trip to China took in indoor stadium concerts in Shanghai, Beijing and Tianjin, and they performed live on television to 350 million viewers as the headline international act at the Shanghai International Film Festival.

In 2013, Blake continued with their sell-out tours of Europe and the Philippines and early this year they made their New York City debut. Blake were proud supporters of and sang the theme song for the much publicised trek by Britain’s Prince Harry to the Antarctica to raise funds and awareness for Walking with the Wounded. They have sold over one-and-half-a-million albums internationally, and have performed on nearly 160 television shows around the world.

Described as “the James Bond of classical music”, Cortes had phenomenal success with his self-titled debut album, which was number one in Britain, as well as sell-out tours and a Classical Brit Award nomination in 2008.

He has been nominated several times for the Icelandic Music Awards and the Icelandic Performing Arts Awards – and has been voted sexiest man in Iceland twice. He has sung across Scandinavia, and in Europe, the United States and Asia, as well as at the prestigious venues of the Barbican, Royal Albert Hall and Royal Festival Hall in London and Carnegie Hall in New York City. He sang at one of the BBC’s top featured events, the Proms in the Park in front of 40 000 people. It was broadcast live to millions of viewers.

Cortes has released classical and crossover albums in his native Iceland and the UK, Germany, Austria, and Switzerland, reaching number one on the charts in South Africa and Taiwan.

Formed by a group of committed, resilient musicians, the JPO was established in May 2000 following the demise of the National Symphony Orchestra. It strives to be nationally and internationally recognised as South Africa’s leading philharmonic orchestra, performing music that incorporates the greatest accomplishments of classical and South African music genres.

During 2000, the JPO used its own scant financial resources to present 15 concerts that included three overseas guest conductors as well as world-renowned overseas artists. Since its inception, the orchestra has presented four symphony seasons every year, mostly with the assistance of corporate sponsorship, individual donations and ticket sales.

In addition to its symphony concerts, the JPO has performed Queen: the Concert, The Joburg Pops, La Traviata and La Boheme for Opera Africa, Carmina Burana for the German government’s celebration of 10 years of democracy and Fauré’s Requiem for University of Johannesburg.

In 2007, the JPO became a full-time orchestra with permanent musicians on yearly contracts. Two years later, it performed at the inauguration of President Jacob Zuma at the Union Buildings in Pretoria. It also received funding for three years by the National Lottery Distribution Trust Fund and provided the recordings for the opening and closing ceremonies of the FIFA Confederations Cup. In 2010, the JPO was asked once again to record for the FIFA World Cup opening and closing ceremonies.

That same year, it celebrated its 10th birthday.