For more than half-a-century, the Black Sash has been helping people in tangible concrete ways realise their human rights. Formed in response to the discrimination practised by the apartheid government, today it still works to assist the downtrodden. 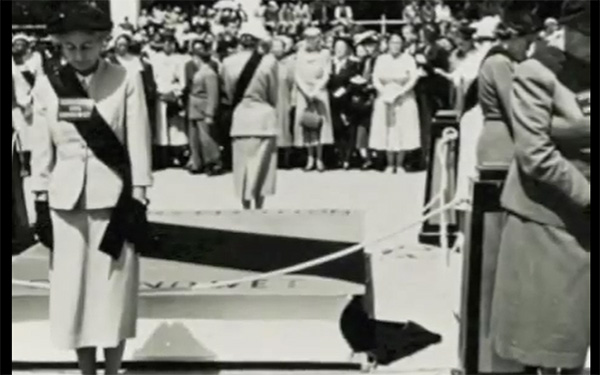 Black Sash, the initiative that started in 1955 to fight against the government’s apartheid laws, are now for example helping people who have fraudulent deductions for loan repayments and airtime taken from their grants. (Image: Screen grab via YouTube)

Helping people who rely on social grants who have fraudulent deductions for loan repayments and airtime taken from their grants, is just one of the things the Black Sash has been doing over the past few years to relieve the pressure of poverty.

In May, this initiative – known for its vision to make human rights real – celebrates 60 years of existence. On 19 May 1955, six women decided to take political action against the packing of the Senate to disenfranchise coloured voters; it was to be foundational to the establishment of the Black Sash.

According to the organisation, the women who started this initiative continued to making their voices heard by organising peaceful marches, handing over petitions and helping a number of South Africans who were affected by apartheid laws.

“They were also part of a group of women who marched to the Union Buildings in 1956 against pass laws, on what is now known as Women’s Day,” says the Black Sash. “The group was initially called The Women’s Defence of the Constitution League and later nicknamed the Black Sash by the media, because of the black sashes they wore to marches.”

It was not an easy road for them. News reports speak of the negative feedback from the public. They were often taunted as vuilgoed (rubbish) and lighted cigarettes were thrown at them. In Worcester, in the Cape, a man confronted the women, saying: “We would like to push you into the sea.”

But they also had some support: they were greeted by V for Victory signs, thumbs-up salutes and warm congratulations for their activism.

The seed they planted

The Black Sash embarked on campaigns against the erosion of civil liberties and racial segregation. “They also set up a bail fund in 1958 to assist people arrested for contraventions of the pass laws. Soon afterwards, the first Black Sash advice office opened in Cape Town, offering free paralegal advice and support.

“The following 20 years were difficult as political movements were driven underground or into exile. Through this period the women of the Black Sash stood in silent protest with their placards, provided advice services, researched laws, followed parliamentary debates, wrote articles, took statements, monitored and recorded meetings, and kept and published lists of those victimised by the apartheid government,” the organisation says.

“We continue to work to realise the rights of the most vulnerable, with an emphasis on women and children. In partnership with civil society organisations across the country, we work in three programmes: rights-based information, education and training; community monitoring; and advocacy in partnership.”

Elroy Paulus, the national advocacy manager, said that until 2011 the Black Sash offered one-to-one advice-giving as a service. While this service is no longer an option, there is a helpline through which members of the public can ask a Black Sash paralegal anything relating to their rights. “We work with approximately 400 community based-organisations [and] non-governmental organisations, many being advice offices,” he explained.

Much needed to be done

While apartheid may be over, there is still a need for the Black Sash. Lynette Maart, the national director, said: “The challenges facing South Africa are inequality and extreme poverty, a footprint left by apartheid and globalisation which will not be changed quickly.

“While we acknowledge that we have a good Constitution, it is in part a promise that does not always translate into human rights on the ground, and we need to remain mindful that there is still a lot of work to be done.”

She gave an example of one of the group’s achievements: she and a colleague were on a farm in Franschhoek to witness the repayment of funeral cover instalments deducted fraudulently from the accounts of several social grant beneficiaries.

“The Black Sash and our community based-organisations [CBO] partners have witnessed many other unauthorised, illegal, fraudulent and immoral debit deductions from the Sassa branded bank accounts – including [for] water and prescribed debt.”

Prescribed debt is debt that is older than three years. In terms of South African law, a debt prescribes – meaning it falls away or expires – after three years.

In March this year, the Constitutional Court ordered Sassa to implement a timetable for the new tender for payment of social grants nationally in October 2015, Maart said.

“We hope that the South African Reserve Bank serves on the new Sassa Tender Bid Committee to ensure that proposals from prospective bidders technically and systemically prohibit any EFT, stop or debit order deductions from ring-fenced bank accounts and block the trade of personal confidential data, including biometric data and cellphone numbers.”

While the hard work to make human rights real continues, the Black Sash did spend time celebrating its 60th year.

On 16 May, Standing on Street Corners: A History of the Natal Midlands Region of the Black Sash, by Mary Kleinenberg and Christopher Merrett, was launched in Pietermaritzburg.

On 19 May, the book Sheena Duncan was launched in Cape Town.

On 23 May, a gathering was held for Gauteng colleagues at the Women’s Jail Atrium on Constitution Hill. Sheena Duncan was launched in the region and there was a panel discussion.

Duncan was an anti-apartheid activist and counsellor. She was the daughter of Jean Sinclair, one of the co-founders of the Black Sash, and joined the organisation in 1978. She played a significant role in the group and was involved in recruiting members for resistance movements.

The book Sheena Duncan was written by her colleague and friend, Annemarie Hendrikz, while Archbishop Emeritus Desmond Tutu wrote the introduction. The online news portal IOL reports that Tutu, speaking at the launch, said he thought God was proud of Duncan. “I think God was glad God made Sheena Duncan. He rubbed his hands together and said, ‘Now there’s something.'”

The Black Sash National Helpline, 072 66 33 739 or help@blacksash.org.za, is a free national information, advice and referral service.

Watch the history of the Black Sash and how these women made an impact: