Billie Zangewa will be appearing in the next episode of Brand South Africa’s Play Your Part TV series on Sunday, 31 August at 9pm on SABC2. 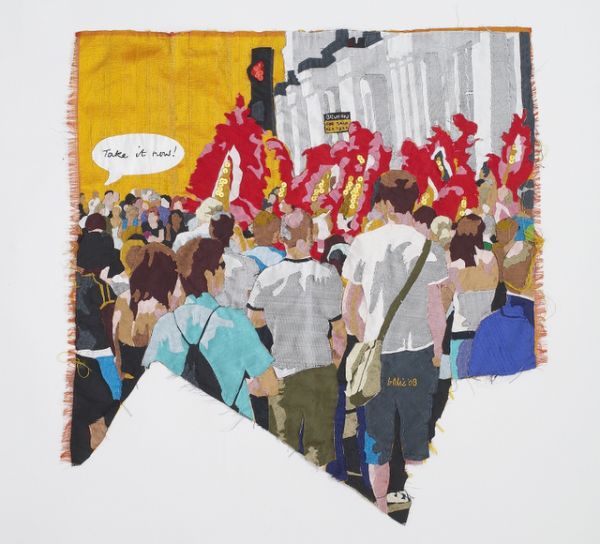 “My art career took off so effortlessly that I felt this was a sign of what direction I should take,” says artist Billie Zangewa, winner of the 2004 Absa L’atelier Gerard Sekoto Award.

Born in 1973 in Blantyre in Malawi, Zangewa, who describes her art as “self-exploratory, visually sensual”, has a Bachelor of Fine Arts degree, with majors in graphics and printmaking, from Rhodes University in Grahamstown.

At the age of 10 she started drawing fashion illustrations, and was by then a fashion fanatic, devouring Vogue magazine and watching Video Fashion Monthly.

After her studies she settled in Gaborone where she first worked with oil pastels, often depicting glamorous women. This organically grew to experimenting with textiles, in particular silk. She made handbags finished with embroidery depicting Botswana flora and fauna, and in 1996, she participated in a group show in Gaborone. This was followed by a solo exhibition entitled Gestures, at the Alliance Francaise in the city. In 1997 she was the winner of an Artists in Botswana Award for the Visual Arts in the graphics category.

From Gaborone to Jozi

Later that year she moved to Johannesburg where she spent a few years working in fashion and advertising. “The landscape of the Johannesburg CBD then became a source of inspiration and she began to do deconstructed interpretations onto her handbags,” indicates her website. In 1999 she participated in a Rhodes University retrospective, entitled Printwork.

When she drove down Commissioner Street in Johannesburg soon after arriving in the city, she was “awed by the reflective quality of a number of the high rise buildings along that street. Later, upon visiting a fabric shop, she noticed how the raw silk swatches behaved in a similar manner to the glass, their reflections changing tone and hue as they shifted,” writes Michael Smith on the artthrob.co.za website.

He goes on to say that she “clearly revels in the quality of the silk”. “She soon began experimenting with this fabric, allowing it to assert a new, painterly identity in the context of her street scenes, group scenes and portraits.”

In 2001 she took part in a group show at the Spark Gallery in Johannesburg, and in 2003 she showcased her work in three exhibitions in the city, one of which was entitled Handbags.

“Her works are made from fabric, sewn painstakingly onto a base in a way that allows her to build a picture and suggest the illusionism of painting or photography, but which lets the textures of the various fabrics disrupt easy consumption,” states Smith

In 2004 Zangewa won the Absa L’atelier Gerard Sekoto Award with a triptych of handbags depicting Johannesburg cityscapes called Faith, Love and Hope, in a tribute to the city. “Whilst working on the solo exhibition that was part of the award, she decided to transplant her silk works onto a two-dimensional surface which she then called silk tapestries although the technique is more appliqué.”

The award was followed by a five-month arts residency at the Cité International Des Art in Paris.

In 2004 she participated in a South African group exhibition in Pujols sur Dordogne in France. In 2005 she took part in the Black Fine Art Show in New York, and in the same year she held another solo exhibition in Johannesburg.

In 2006 Zangewa was the winner of the Res Artis (artist residency) in Antwerp in Belgium, where she spent three months. That year she participated in two exhibitions, in Dakar in Senegal, and in Turnhout in Belgium.

In 2007 she held another solo exhibition, entitled Silk Tapestries, at the Afronova Gallery in Johannesburg, and two group exhibitions – one in Cape Town, another in Joburg.

In 2008 she went back to Afronova for Stitch by Stitch, and her Fragments solo exhibition took place in Paris. She participated in two group exhibitions the same year, in New York, and Las Palmas in the Canary Islands. She held another solo exhibition at the International Contemporary Art Fair in Tokyo, entitled 101 Tokyo.

In 2012, she participated in a group show entitled Hollandaise, in Amsterdam. Her pieces incorporated photography into textile works, with classic Vlisco fabric patterns. Her silk tapestries continue to be exhibited around the world.

Zangewa, who describes herself as “an introvert who loves spending time at home. Although from time to time I like to surprise myself and get out”, has also ventured into singing, taking the name Billie Starr.

She says at present she is “working on a series of silk tapestries called The Final Frontier and these tell the story of the days and nights of a woman living in urban contemporary Africa.” 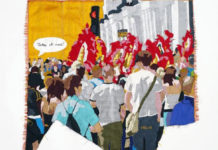