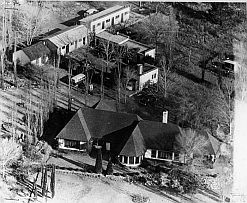 Liliesleaf farm as it looked in the 1960s.
It is now a museum.
(Image: Liliesleaf)

RELATED ARTICLES
• Liliesleaf to sprout new hotel
• Education focus of Mandela Day 2010
• ‘Befriending the mistakes of the past’
• Mandela: a remarkable 92 years

The ruling African National Congress (ANC) remembered Arthur Goldreich, a key member of the liberation movement, as a South African who sacrificed his white privileges in a tenacious fight for freedom and equality in the country.

“Not only did he sacrifice his privileges as a white South African, but he bore the pain of fighting against apartheid,” ANC spokesperson Jackson Mthembu said when reacting to news of Goldreich’s death.

The Johannesburg-born activist died on 24 May 2011 at age 82 after a lengthy battle with Alzheimer’s disease. He was based in Israel at the time.

In South Africa Goldreich was best known as one of the founders of the ANC’s military wing – Umkhonto we Sizwe (MK) – in 1961.

Goldreich and his family lived on the farm Liliesleaf in Rivonia, northern Johannesburg, along with icons like Nelson Mandela and Walter Sisulu to plan MK’s strategies in secret. Liliesleaf was bought with funds from the Communist Party of South Africa, the Goldreichs posed as the white owners of the estate so as not to raise the suspicions of apartheid authorities.

The Spear of the Nation, as Umkhonto we Sizwe is known in English, went on to become an armed struggle force to be reckoned with – even after Mandela, Sisulu and others were arrested and, following the Rivonia Trial, sent to Robben Island as political prisoners.

Goldreich was one of 17 freedom fighters arrested during the police raid at Liliesleaf on 11 July 1963 – and he would have become one of the Rivonia trialists had he not made a daring escape from a cell at the Marshall Square Police Station in Johannesburg on 11 August 1963.

Goldreich, along with Harold Wolpe, Mosie Moola and Abdulhay Jassat, bribed a guard at the station and then fled the country via Swaziland and Botswana.

“We salute his heroic resolve that saw him leave South Africa when he escaped from custody,” said Mthembu.

Goldreich returned to Israel in 1964.

His first visit back to South Africa was after the democratic elections in 1994, when he attended a reunion at Liliesleaf. The farm has since been turned into a museum.

Goldreich is survived by his sons Nicholas, Paul, Amos and Eden.

“Arthur Goldreich will go down in history as one of the rare breeds of revolutionaries who changed the course of South African history,” the ANC said.