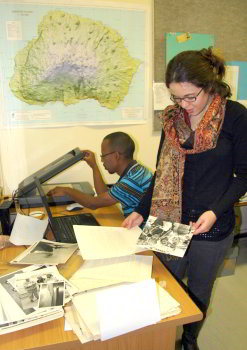 Ricardo Davids and Dora Scott of the
Centre of Invasion Biology hard at work
digitising the photographs that they have
collected as part of the Antarctic
Legacy Project.
(Image: Stellenbosch University) 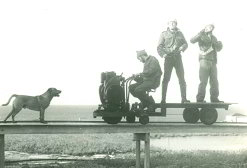 Oubaas the Rhodesian Ridgeback, the first
dog to live on Marion Island in the 1960s.
(Image: C Wolfaardt) 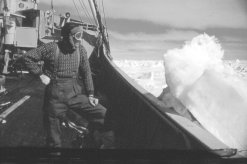 The online database contains a wide
variety of information from people who
have worked on the island in various
capacities. Many of the items have never
been available to the public and
documenting the information in the
database will ensure that the memories
are not lost.
(Image: C de Weerdt)

South African researchers have embarked on a project that will give future generations of compatriots online access to information about the country’s presence in Antarctica over the past six decades.

Antarctica and the stories of the intrepid explorers you ventured there have always captured the imagination, yet few people know of South Africa’s connection with the continent.

This prompted the establishment of the Antarctic Legacy Project. What makes the archive so distinctive is that once it is complete, it will contain more than 100 000 pages of historical records including maps, drawings, photographs, slides, journal entries and oral history interviews of people who have worked there over the years.

South Africa, through the South African National Antarctic Programme (Sanap), is the only country in Africa that is involved in the Antarctic region. It manages research bases on Antarctica and Gough and Marion Island, both sub-Atlantic islands.

Antarctica has no permanent human residents, but people live there throughout the year at research stations scattered across the continent.

The Antarctic Legacy Project is funded by the Department of Science and Technology (DST) through the National Research Foundation (NRF).

It is a collaborative venture between the Department of Historical Studies and Animal Demography Unit at the University of Cape Town and the DST-NRF Centre of Excellence for Invasion Biology based at Stellenbosch University.

Antarctic Legacy Project researcher Dora Scott says the database contains prized information about South Africa’s history in the Antarctic region. Many of the items have never been available to the public and documenting the information in the database will ensure that no memories are lost.

The Department of Historical Studies and Animal Demography Unit at Cape Town university has already digitised more than 70 000 pages of relevant public records from the South African National Archives.

The online database contains a wide variety of information from people who have worked on the island in various capacities – from scientists, support personnel and administration staff, to construction workers, engineers, crew on the ship and anyone else who has come into contact with the area.

“We want information from a diverse group of people as this gives depth, character and variety to the database,” Scott says.

Finding the stories has been a lengthy process, but very rewarding. Researchers obtained much of the information from the South African Antarctic Club, an organisation that connects and reconnects people with Antarctic interests.

Universities that have research programmes in Antarctica have also assisted with information.

Scott has come across many people with interesting anecdotes of their time in Antarctica and on Marion and Gough Island.

“We have been fortunate enough to talk to people who were part of the very first team who went there in December 1959. They were all young and excited about the adventure awaiting them,” she says.

The database even has a photograph of the first dog that lived on Marion Island in the 1960s, a Rhodesian ridgeback called Oubaas.

She says that one of the reasons why they received so many images is because photography was a popular hobby on the island. “There wasn’t much else to do, so people on the island set up make-shift dark rooms to develop their photos,” she says.

Scott also received a diary entry from a man who experienced a fire outbreak while living in Antarctica in the 1960s. Back then, fire was one of the biggest threats to people staying there.

A fire could destroy all means of communication with the outside world and the base where people lived, leaving them vulnerable to exposure. Luckily, they woke up in time and got the fire under control.

Fire is still a threat on Antarctica and the islands today, but unlike in the past, the base is above ground and no longer made of flammable materials such as wood.

Scott says these days there are also procedures in place, such as fire extinguishers and safety briefings, to deal with such occurrences.

Why Antarctica is important for research

According to Sanep, the inward curving magnetic lines at the poles makes them the perfect place for space particle research.

Scott says that a significant amount of research into climate change is also done in Antarctica. The thin ozone layer at the poles also makes it possible to monitor and study space and sun activity, which is important for space physics and meteorology research.

Candice Steel, programme director for knowledge fields development at the NRF, said in a statement that the intention of investment into the Antarctic Legacy Project is to stimulate and develop research into the fields of social science, law and humanities, within the context of the Sanep.

In a first for South Africa, the project has already been used by a student, Lize-Marie van der Watt, for her PhD on the history of South Africa’s involvement in the Antarctic region.

Van der Watt is the first person who has used the online archive database to produce an academic document.

The database is already proving to be a useful tool for polar historians and scholars from various disciplines who want information on South Africa’s Antarctic research efforts.

The Antarctic Legacy Project is also a valuable addition to the collection of historic material contained in similar databases in Australia, the UK and US.

“I do not know of any other project which provides such a broad range of information,” said Dr Cornelia Luedecke, who chairs the Scientific Committee for Antarctic Research.

The majority of the project will be completed by 2013, after which it is hoped that further funding will be made available to update the database on an ongoing basis.