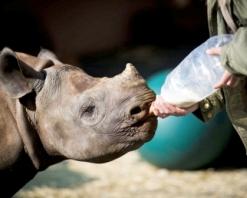 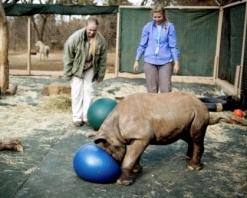 At the facility, limited human contact will be made as the rhinos need to adapt to the wild. Once the rhinos reach three years, they will be released into nature. 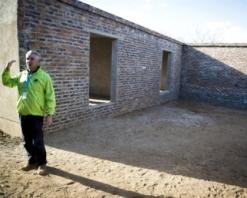 The  orphanage will open at the Entabeni Safari Conservancy in the Waterberg area of Limpopo in September.
(Images: Howzit msn)

While one plan – aimed at giving the next generation of South Africa’s rhinos a fighting chance – takes shape in the northern province of Limpopo, in the Eastern Cape it is bees that are getting busy in the fight against poachers.

A rhino orphanage that will open at the Entabeni Safari Conservancy in the Waterberg area of Limpopo in September is set to give orphaned calves a new lease on life.

The centre’s first resident, a five-month old black rhino, is believed to have been recently abandoned by its mother and left in critical condition. The youngster does not have a name yet, and is responding well to its handlers, from whom it receives 24-hour attention.

According to conservationist Karen Trendler, the orphanage forms a vital part of the Rhino Response Strategy National Rescue and Response network, and once completed, will care for between 25 and 30 rhinos that would probably have otherwise died.

“The poaching crisis that is currently causing lots of problems in the country is producing a large number of casualties in the form of traumatised and often injured calves,” she said.

The facility will include four high-care rooms and one intensive care chamber where sick calves will receive 24-hour attention and can be treated in an incubator.

The point of the centre is that there will be no human contact with the calves, except for their handlers. The unofficial motto is ‘no tourism, no commercialism’, which means that the facility will not be open to the public as the rhinos need to be protected. This way they will also have a better chance of survival so that they can hopefully be released back into the wild at a later stage.

As the calves become older, they will be moved into bigger and bigger areas until the age of three. This is when they will be released into nature, where they will continue to receive limited human contact, so they can successfully adapt to the wild. The calves might also be donated to breeding programmes around the country.

She added that it is only when they can go back to into the wild, and can breed and rear their young successfully, that they can contribute to the overall conservation effort.

South Africa is home to a large portion of the world’s rhino population, and according to the latest figures from the Department of Environmental Affairs, 281 have been poached in the country since the start of this year, meaning the total at the end of the year is likely to exceed 2011’s figure of 448.

A decade ago only a handful of rhinos were falling prey to crime, but over the years demand for their horn has grown tremendously, and efforts to curb poaching have not been as effective as authorities would have preferred.

Rhino horn has been sought after for centuries, particularly in some Asian countries, where they are believed to have healing powers for certain diseases, hence the rise in poaching.

Another effort announced recently takes a different approach to that of the Entabeni centre. Grade 9 pupils Louise Poole and Jamie-Lee Stone from Kingswood College in Grahamstown have come up with a creative way to keep poachers at bay – by training honey bees to hopefully put them off their criminal acts for good.

Their idea won the girls a prize at their region’s Eskom Expo for Young Scientists, an annual event that showcases inventions and scientific discoveries by pupils in 28 regions around the country, with the best presentations going on to the national finals.

The two won scholarships to study at Rhodes University for a year to further enhance their pioneering project, as well as a prize in the Best Project by Females category. They will present their project at the national finals in October.

A handful of bees have been trained so far to detect kudu horn, as rhino horn was impossible to obtain – but the principle is the same – and the insects learnt to associate the smell of the horn with sugar water within 15 minutes.

“Bees have a powerful sense of smell,” explained Stone. “They could track a grain of salt in an Olympic-sized swimming pool.”

She added that it would be easy and cost-effective to transport bees to border posts, which are popular smuggling channels, where they could be used to detect smuggled rhino horn.

The idea for the project took shape after a presentation at Kingswood by Dr William Fowlds on behalf of the Kariega Foundation, which lost one rhino named Themba in March. Another rhino, Thandi, survived a poaching incident around the same time. Fowlds told the pupils of Thandi’s brave fight for her life. 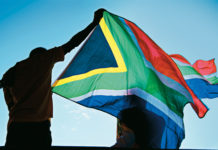