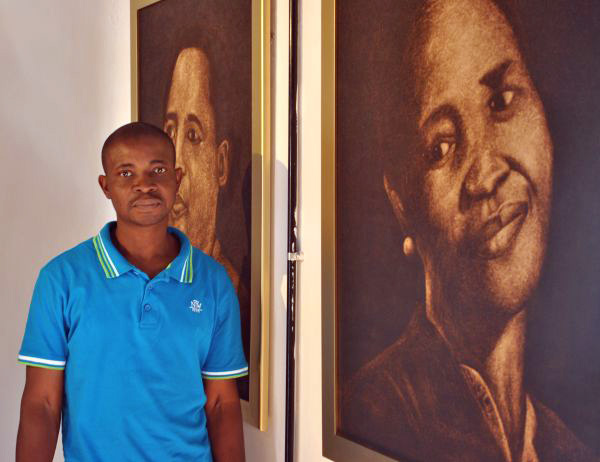 “I want us to remember our heroes. Not just for a day, but to celebrate them in our daily lives.” Nicholas Ojo (Image: Sulaiman Philip)

Her eyes are warm, even a little mischievous. The light, out of frame, throws a shadow across her strong chin. The gentle shading creates the impression that Lillian Ngoyi is stepping back into the darkness.

Of the 16 portraits on show at the Workers’ Museum in his new show, the Ngoyi portrait best captures Nicholas Ojo’s vision. The show – A Tribute to Heroes of Freedom and Liberation – celebrates the strength of character of men and women who have fought for the freedoms we enjoy. The portraits, of well-known South Africans such as Nelson Mandela, Archbishop Emeritus Tutu and FW de Klerk and others such as Nigerian Ken Saro Wiwa, Mohandas Gandhi and Mother Theresa, celebrate lives dedicated to fighting for the oppressed.

“We all celebrate these lives, but who of us are willing to make the sacrifices they made? I speak to young people all the time and too many don’t know who Lillian Ngoyi [was] or what she did for them. Too many of our heroes are too quickly forgotten,” Ojo says.

His unconventional homage to heroes would be impressive if he simply created the work with a pencil or paint; but it is even more remarkable given that he uses heat as his medium. Pyrography literally means “to draw with fire” and is considered one of the earliest art forms. The history of pyrography can be traced to the Chinese Han Dynasty, where it was reserved for art celebrating emperors and hero warriors. But Canadian artist and historian Professor Robert Boyer claimed the technique should be considered the first art form: using the charred remains of their fires, prehistoric people created designs on cave walls.

Today the form is popular with hobbyists who use electrically controlled heat pens to draw and scorch designs on to wood. This, in Ojo’s opinion, is not really an art. The pens do not allow the drawer to create the nuances seen in his work. He uses the more traditional form.

Pyrographics is an incremental way of creating art, the artist explains. He begins with a sketch on corkboard that he then blackens with a blowtorch. Using tools, he scrapes away the blackened board to create a work of art. It is very much like scraping away the burned bits on a piece of toast, and it is a skill that took Ojo years to master.

“For years I would not create a portrait of someone wearing spectacles. It was something I was never any good at. The shading was impossible to get right, spectacles would disappear into the background,” he explains. Pointing to a portrait of Gandhi, he says that it took a steady hand to recreate the picture of the man wearing his trademark round spectacles.

The visually arresting portrait of Winnie Mandela is probably the best in the collection. The Mother of the Nation seems to be escaping from the frame, Ojo managing to create a sense of motion despite working with just light and dark. 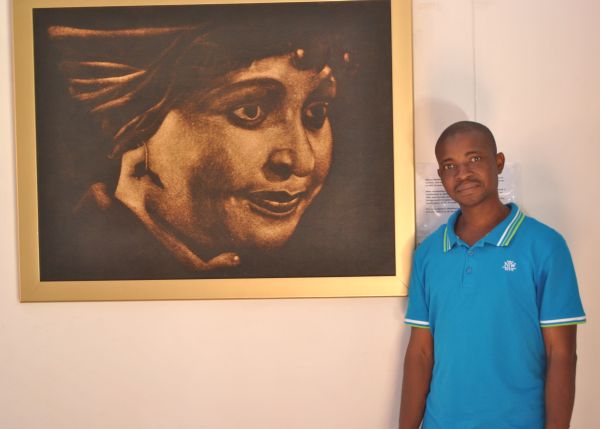 Ojo’s portrait of Winnie Madikizela Mandela has drawn the most praise of all the worls on show. (Image: Sulaiman Philip)

Pyrography is considered a forgotten art form whose height of popularity was during the Victorian era. However, it has been a mainstay of traditional African art, and in South Africa, Zulu crafters use a similar though more antique craft form. For generations, rural Zulu crafters have made artwork using burnt wood for portraits and to decorate utilitarian objects such as spoons and meat platters. The form has been dying out, though, because of the lack of a good wood supply.

A strange and interesting form of wood art that is becoming popular among traditional craftsmen, however, is the use of burned matches to create pieces. Traditionally it was a hobby common among young boys, but it has grown into a collectable art form. Artist Allina Ndebele leaned the craft while in prison and her work, as well as her beadwork, is collectable.

Ndebele built a training centre close to Rorkes Drift, in KwaZulu-Natal, where she trained local women in traditional crafts such as beading, weaving and dyeing. It is a dream that Ojo shares; the Nigerian artist is desperate to train young South African artists in pyrography as well as traditional Nigerian indigo dyeing.

Ojo’s portraits of men and women he considers heroes are on show at the Workers’ Museum in Newtown, Johannesburg until May 15.