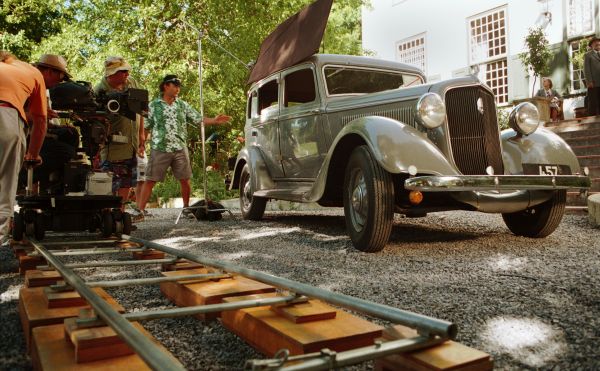 South Africa’s maturing film industry is drawing an increasing number of foreign film producers to our shores. The government incentives and diverse landscapes makes the country one of the world’s most attractive film locations. (Image: Media Club South Africa)

The Americans are coming – looking to spend their film and TV production budgets in South Africa. With that as their mission, four Hollywood executives met South African production professionals at National Film and Video Foundation headquarters in Houghton before travelling down to Cape Town for a second meeting.

Producers Mary Ann Hughes, from Disney; Sara Spring, from Paramount; Kate Beyda, from Warner Bros; and Vince van Petten, the executive director of the Producers Guild, are guests of Brand South Africa, the NFVF, the Gauteng Film Commission, destination marketing firm Wesgro, SAA and SA Tourism. The trip is the result of a study conducted by the NFVF which found that of the 70 movies produced with the help of government incentives in South Africa in 2012, just seven were foreign productions. Those seven were responsible for 40.5% of all money spent by film crews.

At the spirited but genial Houghton meeting Zama Mkosi, the NFVF chief executive, pointed out that the South African industry was a mature one which offered international crews professional, experienced technicians and a diversity of environments that had stood in for multiple locations in the past. “Locations in South Africa have been used to portray 57 different parts of the world, from Sierra Leone to the Middle East and Afghanistan.”

Mkosi went further to tout the local industry as a source for productions, noting that as South Africa’s democracy had matured the ideas making it on to film had also changed. For local film makers, movies like Tsotsi won rave reviews but did not earn money in the local market, where comedies were always the biggest earners. “We are moving away from politically themed films to portraying the everyday ordinariness of life.”

Guy Macleod, an entertainment lawyer at South African firm Irish Inc, added that the government had made it easier and beneficial for foreign film crews to tap into local incentives such as no fee permits, and cheaper costs through agreements local film commissions had with local suppliers.

The biggest challenge for foreign productions lay not with the quality of technicians, or a lack of talented actors or even locations, Macleod said. “There is an over-abundance of creative talent in South Africa. What we are sorely lacking is experienced and knowledgeable professional services, especially lawyers capable of marrying international entertainment law with South Africa’s legal system.”

However, Macleod continued, government commitment to building the industry meant that strong South African legislation around the arts was muscularly enforced, especially when it came to areas covering copyright and ownership of productions. “Yes there are challenges, but the positives make South Africa the best option for producers looking for the biggest bang for their dollar.”

Carol Coetzee, the chief executive of the KZN Film Commission, highlighted the opportunities available to anyone who wanted to shoot in the Zulu Kingdom. From mountains to sea, the province provided different types of locations for different kinds of films. Coetzee highlighted this by pointing to the rich film history of the region; everything from the family film Racing Stripes to the war drama Zulu had been filmed in the province.

Crucial for film productions was access to reliable high speed connectivity that would allow directors to send daily rushes to overseas bases. “Durban is within 150 kilometres of three sea cables connecting Africa to the world, plus the province is spending millions building a technology hub at the Dube Trade Port.”

Hughes is the only one of the producers present who has experience filming on location in South Africa. Marvel, a subsidiary of Disney, has been shooting the latest Avengers movie in Johannesburg. She laughed along good naturedly as a roomful of Gautengers complained about the traffic chaos caused by the weeklong shoot in downtown Johannesburg. “We will be back. The shoot came in on time and under budget, which never happens on these kinds of projects.”

Paramount’s Spring highlighted the importance of the good reputation South Africa had earned with American crews and film companies. The television series Black Sails, an imagined prequel to the pirate novel Treasure Island, was filmed in Cape Town. One of the producers was Michael Bay, director of the Transformers movie franchise, who was interested in filming his next project in South Africa. “Jon [Steinberg, the producer] kept telling Michael [Bay] what a great experience shooting Black Sails was. That got Michael thinking that South Africa would be a great location to shoot the Teenage Mutant Ninja Turtles.”

Van Petten stressed that his priorities differed from those of the three executives with whom he was sharing the stage. Theirs was creating profit for the corporations for which they worked; for him it was a matter of encouraging more people to join the ranks of movie producers. They were the entrepreneurs who drove the industry, he suggested.

Mention of the Producers Guild’s Diversity Workshop programme caught the attention of the producers in the auditorium. “We have 6 000 members and the fact there are no South Africans is an omission we would like to correct. If I find a producer who fits the criteria I would extend an invitation to them for our workshop.”

The most important criterion for the workshop was that a producer had to have actually produced a movie that had been sold to an international market. “The reward is working with a producer in the US on a movie going into production. The opportunity provides you with a chance to not only learn the ropes of the art, but also to grow your network and give you access to an international market place,” Van Petten explained.

Thanking the executives for their visit, Mkosi ended the morning by saying: “The country offers great opportunities. We know you want to make movies here and we want you to make movies in our country.”