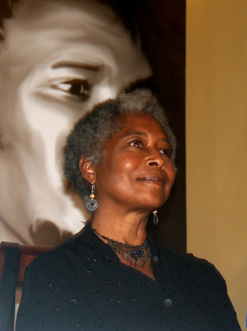 Portraits of individuals who have delivered
past lectures hang in hall of fame at the
Steve Biko Foundation in Johannesburg.
Artworks of former presidents Nelson
Mandela and Thabo Mbeki are among
them.
(Image: Janine Erasmus)

Walker, best known for her Pulitzer Prize-winning novel The Colour Purple, was invited to the country by the Steve Biko Foundation, which was set up in his memory. Biko died while in police custody on 12 September 1977.

“The Steve Biko Foundation is honoured to be hosting Professor Alice Walker on her first visit to South Africa. In short, she embodies everything that Bantu Stephen Biko stood for during his life,” said Nkosinathi Biko, CEO of the foundation, and son of Stephen.

This will be the first time the lecture is delivered by someone from outside Africa, and only the second time it’s been delivered by a woman – the first being Dr Mamphela Ramphele, an internationally respected South African activist, academic, author, businesswoman and medical doctor. Ramphele and Biko had two children, although he was married to someone else at the time.

“It’s because of Professor Walker’s eloquent articulation of the link between identity, activism and social change that the foundation asked her to deliver the Steve Biko Memorial Lecture this year,” said the younger Biko.

The lecture will take place at the University of Cape Town on 9 September 2010 and is titled Coming to see you since I was five years old: An American Poet’s Connection to the South African soul.

According to the foundation, the Steve Biko Memorial Lecture was initiated to examine the relationship between individuals and society, to explore triumphs over inequality, and to speak to challenges and opportunities facing people of African descent.

When asked at a recent press conference what South Africans can expect from the lecture, Walker said: “You perhaps know my poem, Expect Nothing – Live Frugally on Surprise. I prefer to be spontaneous and live in the moment.”

Although this response is cryptic, the author did disclose that she would “address issues of my life and how Steve Biko and I are definitely sister and brother in our love for people”.

She added, “For me this journey is an exploration of how close I feel to Steve Biko in his legacy of caring.”

Walker explained that her link with Biko is based on a “determination to always tell the truth” and the fact that both lived during times of intense political turmoil in the mid-1960s and 1970s.

“Biko lived in dangerous places – and so did I. In the 1960s I was living in Mississippi state, after graduating from college in New York city, and I was trying to bring literacy to people who had little or none. There were fire-bombings, and people were lynched and killed. It was bloody and dangerous in the way that South Africans lived for a very long time during apartheid.

“I will talk about the legacy of Steve Biko and connect our struggles, the paths we’ve crossed and the desire for freedom and growth.

“It boils down to humanity – Biko had a joy of life. It’s my love, respect and admiration for Stephen Biko that drew me here to South Africa.”

At the conference a member of the press asked Walker how it felt to be the first non-African to deliver the lecture. “I take the long view in that there are no non-Africans,” she said.

“Everyone has been inspired by his life over the decades. There are places where I feel called to because of sincere work, and I am honoured to go wherever that may be.

“I love Biko’s fearlessness. He was someone with such integrity – he was a whole being. He fought for his existence with the very last of his energy.

“In this love of people and hope for humanity’s advancement we must acknowledge we have it all within us – it’s just a matter of how we use it,” she added.

Walker is also a poet, short-story writer, essayist, anthologist, teacher, editor, publisher and activist, with a deep interest in race and gender. She was born in 1944 in Georgia, US.

She’s a self-described “daughter of rural peasantry”, growing up in the American south in the wake of the Great Depression of the 1930s.

After completing high school in 1961 she became involved in the civil rights movement, taking depositions from black Americans who had been evicted from their homes for attempting to register to vote.

Published in 1982, The Colour Purple focuses on the struggle of black American women in rural Georgia in the first half of the 20th century, particularly the life of Celie, who writes a series of unburdening letters to God after being repeatedly raped and beaten by her father.

The book became a bestseller and was soon made into a critically acclaimed film directed by Steven Spielberg. The stellar cast included Oprah Winfrey as well as Hollywood greats like Danny Glover and Whoopi Goldberg. In 2005 it was adapted into a Broadway musical play.

The Colour Purple won the Pulitzer Prize for Fiction in 1983, making Walker the first black American woman to receive such an honour.

Her writings have been have been translated into more than 24 languages and her books have sold over 10-million copies.