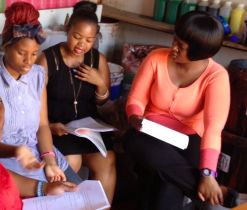 Mokgoro Ntshieng, creative director of the Olive Tree Theatre, is passionate about her art form and its ability to transform society. She believes that if given an opportunity to tell your story, you can change perceptions.

In South African theatre, women’s voices have been muted, so she and her business partner, producer Kerryn Irvin, have chosen four female directors for their inaugural Women’s Theatre Festival.

The festival, from 25 to 27 October, will give female directors a platform and opportunity to show off their skills. Talented and passionate women, Ntshieng argues, hit a ceiling and then are lost to the arts due to a lack of opportunity.

“It’s unfortunately true but directing is a very masculine world. The opportunity for women to tell their own stories, from the perspective of women, was the seed for this festival.”

Ntshieng and Irvin put out a very limited call to friends and associates and within days they had 25 submissions, which they whittled down to just four directors; who will present their work at the theatre.

“There is a need, a thirst for women directors to be given opportunities,” says Irvin.

Nkoto Malybye, a drama lecturer at Tshwane University of Technology, is directing her own Lerato la Daddy, about the pitfalls of a creative life told through the eyes of a Christian father of four daughters.

“As my lead says ‘Music is spiritual, the music business is not.’ I have found as a woman that my opportunities are very limited so it was important for me to be involved in this festival.”

Malybye has a background in community theatre in Mpumalanga province and is aware of theatre’s power as an educational tool. Her desire to be involved in the festival – “I told them I would be happy to do anything” – stems from her belief that theatre can change perceptions.

“African women deal with this idea that strong women are rebellious and need to be tamed. It’s a belief that even women have accepted. We need to change this idea that we are just meant to be pretty, silent baby makers. This festival is a chance for us to dispel that message, for our voices to be heard.”

Alexandra resident Nothemba Sulupha chose to direct a work – Wombman – she wrote specifically for the festival. Her play centres on an infertile nurse at a

“How she copes is the surprise you must come to the theatre to discover.”

Sulupha believes it’s important that festivals like this are held. “It’s an opportunity for women to tell their own stories and hopefully gives us a chance to have a dialogue about the female experience in South Africa.”

Denel Honeyball fell in love with the theatre when she saw a production of Jack and the Beanstalk as a four year old. For her, participating in the festival is about bringing theatre to the community.

“It’s a safe place to open the discussion about the social issues we face as a country. It allows our imagination to travel down paths that we would not otherwise to find solutions that are inclusive.”

“Sometimes the best way to think about things is to laugh about them … rather than to depress and teach.”

She believes it’s far more important to make theatre accessible to as many people as possible rather than to be caught up in making sure they get the right message.

“Yes most theatre organisations are run by men, but that’s a legacy of our past. I look at the audiences and see young people eager to be entertained. This audience is open to watching productions by and about women. That’s important because that’s how you change the future without becoming caught up in the present.”

Diamond Mokoape is the most experienced director at the festival and has chosen to do This is for Keeps, a South African classic written by Vanessa Cooke, Danny Keogh and Janice Honeyman. Mokoape has updated the 1983 Market Theatre Laboratory work for a township audience.

“It’s about the inelegance of the fool’s gold of a relationship built on violence and loathing. Theatre forces you to confront the truth about abuse. It’s such an intimate experience you can’t look away, you can’t ignore the action. This is what makes theatre such a powerful medium.”

The festival faced a funding crisis from the outset but Irvin and Ntshieng were determined to hold it in Alexandra, a township north east of Gauteng’s Johannesburg city centre. Beyond giving a platform to female directors, the pair felt it was just as important to bring the theatre experience to the Alexandra residents.

“An option we discounted early on was to hold the festival at the National School of the Arts in Braamfontein (Johannesburg). We applied for grants and approached local businesses to help with the funding which we eventually managed to scrape together,” says Irvin.

The Olive Tree Theatre is housed in a warehouse at the Yarona Centre, a shopping mall in Alexandra. Inside, you’ll find young creative people drawn from the local community.

“With the actors doing stretching exercises it looks like a yoga studio but the energy and excitement is so real and refreshing. We want to give these people a place to be creative, to try out identities safely,” Irvin explains.

The partners have plans to begin a children’s theatre festival and hold exhibitions of artwork created in Alexandra. First, however, Ntshieng hopes the Women’s Theatre Festival will lead to a theatre renaissance in Alexandra and draw in a new audience.

“South Africa has such a rich history of community theatre, especially liberation theatre, but we want to create a space for the community where they can see well-told lovely stories.”