Other key art events this year in Johannesburg included the The Turbine Art Fair in Newtown, the FNB Joburg Art Fair in Sandton and the Walter Battiss exhibition I invented myself at the Wits Art Museum in Braamfontein. 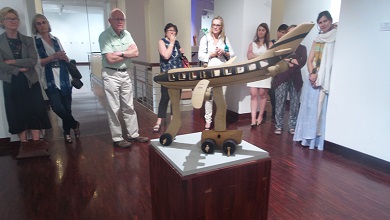 This exhibition is the last in a series at the gallery based on the four elements of water, fire, earth and air. “In considering how works of visual art might represent an ‘invisible’ element, the curators of Air: Inspiration – Expiration have drawn on diverse artistic traditions, styles, methods and media,” says the Standard Bank Gallery. 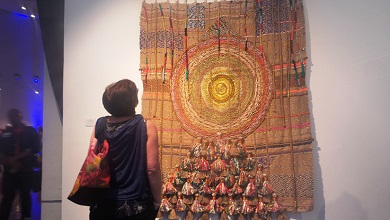 “Empyrean: Castle in the Air” by Lyndi Sales.“Air is interpreted here as wind, sound, breath and spirit; it is associated with birds and insects, with aeroplanes, with clouds, with climate, with industry. The chronological scope of the works collected extends from the ancient to the postmodern – from San rock artists to contemporary South African arts practitioners. There are also various items taken from the African art collections of Standard Bank and the University of the Witwatersrand, including ornately carved musical instruments from southern and central Africa, and crowns and coffins from West Africa,” explains the gallery. 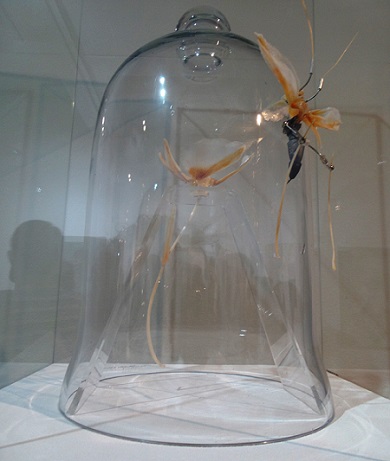 They used a range of materials such as wire, ink and glue on canvas, plant material, acrylic paint, and glue on cotton paper. In their work, they explore the relationship between breathing and nature or natural elements. For instance, musical instruments on show represent that air is needed to play instruments.

Artist Madeline Groenewald said was is happy for the wonderful opportunity to be part of the exhibition. Her Waveflow is digital scores and a series of etchings.
The maps for Waveflow visualise the movements of four succeeding ocean waves flowing across a small section of the shore. The waves were filmed and transcribed into a sequence of freeze-frames. The wavelines in each frame were then traced to map and track the full movement of the wave over time. The maps were then translated into music by the way of following system, explains the catalogue.

“I have always wanted to mix music with art,” said Groenewald. 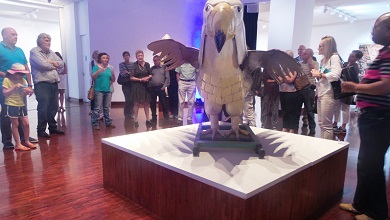 “Eagle Coffin” by Ben Sowah.Curator Cyril Coetzee explained that artist Nina Liebenberg had captured the heartbeats of several babies in one of her works. The heartbeats sounded like bird calls.”The movement of the wind, for example, relates to us breathing in and out,” he said.Air: Inspiration – Expiration ends on 3 December 2016 and entrance is free.

Henri Matisse: Rhythm and Meaning was presented by Standard Bank in partnership with the Embassy of France in South Africa and the French Institute of South Africa.Co-curators were Patrice Deparpe, director of the musée départemental Matisse du Cateau-Cambrésis, and Prof Federico Freschi, executive dean of the faculty of art, design and architecture at the University of Johannesburg.It had been an honour to present the landmark international exhibition at the Standard Bank Gallery, said Standard Bank Group CEO Ben Kruger. “Prouder still is the fact that three of the Matisse pieces displayed came from our very own Johannesburg Art Gallery collection… Matisse was incredibly interested in – and influenced by – African art and textiles, and we are particularly proud that his art has been able to enrich and excite learners through our extensive schools’ outreach programme.”The French artist’s body of work had been exposed to a wider audience thanks to community outreach programmes, free public walkabouts and innovative pop-up studios in the city, giving the public the opportunity to create their own Matisse- inspired artworks, Kruger explained.

Another step in making Johannesburg an artistic hub is the establishment of First Thursdays. First Thursdays is a free cultural event happening each first Thursday of the month. Galleries and other spaces and attractions in Braamfontein, Maboneng and Rosebank stay open late on the night.The next event is on Thursday 3 November 2016.First Thursdays set up show Johannesburg following the success of the venture in Cape Town. During the Matisse exhibition, the Standard Bank Gallery also extended its opening hours on First Thursdays.Print maps of the galleries taking part in First Thursdays are available at most listed venues.