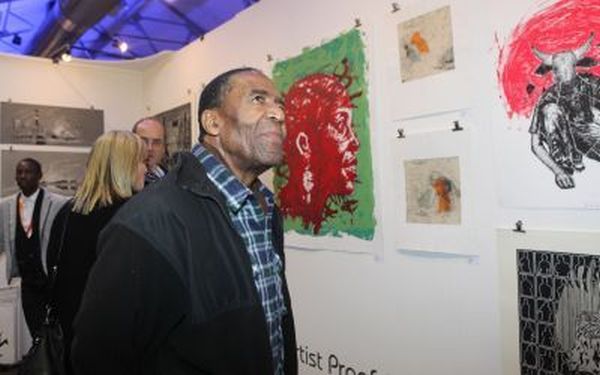 The African contemporary art scene is blooming in South Africa, with one fair going into its seventh year, and two others having a second showing this year.

The longest-running of them, the FNB Joburg Art Fair, is planning its seventh splash in August this year in Sandton, in the northern suburbs of the city of gold. “As we sit down to plan for the seventh edition of the FNB Joburg Art Fair, we are very excited to [get] feedback on what a pivotal year 2013 was for the African contemporary art scene,” says Ross Douglas, the director and founder of Artlogic, the company that initially conceived the idea.

In 2013, 33 galleries participated, with groups in Mozambique, Nigeria and Zimbabwe showcasing work, while galleries in England, France, Germany and Spain took floor space too. Douglas says sales were up 25%, with R20-million raked in. Some 10 000 visitors attended the fair, which was held in September.

Artlogic was founded by Douglas in 2004, with its first venture a production of William Kentridge’s 9 Films for Projection, shown in South Africa and New York, as well as The Magic Flute. Artlogic also produces the FoodWineDesign Fair, and the Winter Sculpture Fair, held in the scenic surrounds of the Nirox Foundation sculpture park, in the Cradle of Humankind, some 40km north-west of Johannesburg.

Douglas says that the Joburg Art Fair is now on the international art calendar, and the 2013 edition secured interviews on German National Radio, Deutsche Welle, Monocle, Art Tactic and the AMA newsletter. There were also six African pavilions at the Venice Biennale 2013, he adds, and the Golden Lion for the best national pavilion was awarded to Angola.

“While we [had] been pioneers for five years, 2013 saw no fewer than two new art fairs in South Africa.” The first Cape Town Art Fair took place in October, with the second planned for late February this year. And the first Turbine Art Fair, in Newtown in downtown Joburg, took place in July; the second is planned for July this year.

In total, 28 South African galleries were represented in Newtown, with the aim to create a platform for aspiring art collectors to buy art, says Jade MacCallum, the marketing manager of the Forum Company, which conceived and organised the event. A ceiling of R25 000 was set for the artworks.

“The project was started by The Forum with the purpose to educate, include and excite people about the wonderful world of art, people [who] wouldn’t ordinarily be exposed to art or galleries. Sharing art experiences enables us to live out our passion and create opportunities,” says MacCallum. Some 3 000 people attended the two-day event, and she says the organisers are satisfied that they achieved their aim.

The second Cape Town Art Fair takes place at the start of the year in which Cape Town is World Design Capital (WDC). “WDC is a biannual honour, awarded by the International Council for Societies of Industrial Design, to cities across the globe to show their commitment using design as a social, cultural and economic development tool,” indicate the organisers of the fair, Fiero Milano Africa.

In all, 40 galleries took stands at the first Cape Town fair, most of which were from the city. Asked why it took Cape Town so long to have an art fair, Liza Dyason, the event producer, said: “I’m uncertain why it took so long… the idea seems obvious. Until now it was felt that the market was primarily Joburg-based but with the enormous developments and investments going into art and design in the Mother City, the [Cape Town Art Fair] was seen as an important addition to the events that are planned, especially with Cape Town World Design Capital 2014 in mind.”

Fiera Milano Africa director Louise Cashmore says: “The success of the first fair in 2013 clearly illustrated that the time was right for Cape Town to host an art fair of this nature. Cape Town is an international city and home to many of the country’s leading contemporary artists, curators and galleries.”

Another spin-off was the 1.54 Contemporary African Art Fair, held in London in October 2013. Artists from Tanzania, Mali, Angola and Benin exhibited, and galleries from Equatorial New Guinea, Ivory Coast, Mali, and South Africa took stands. Alongside these galleries were several European dealers who have an interest in work from Africa: Milan’s Galleria Continua, London’s Jack Bell and Berlin’s Mikael Andersen, among others.

In November, the announcement of the first major private art museum in Africa was made: the Zeitz Museum of Contemporary Art Africa will open in late 2016 in Cape Town. Jochen Zeitz has committed his collection of contemporary art from Africa and its diaspora in perpetuity as the museum’s founding collection. Not only will he underwrite the running costs of the museum, but he will provide “a substantial acquisition budget to allow the museum to acquire new important artworks over time to remain on the edge of contemporary cultural production”, according to a statement by the V&A Waterfront, his partner in the venture.

The museum will focus on collecting, preserving, researching, and exhibiting “cutting edge contemporary art”. It will be housed in the historic Grain Silo at the V&A Waterfront, with the V&A committing over R500-million to the development. “Built in 1921, and at 57m tall, the Grain Silo remains an icon of the Cape Town skyline. This investment will further the development of art in Africa and acknowledges the important cultural and financial contribution the visual arts sector makes.”

Around the time of the announcement, Zeitz said: “Over the last two decades, Africa has played an important role in both my professional and private life. My collection has been strategically built over many years specifically with the goal to create an internationally relevant public contemporary art museum in Africa. After considering many cities across Africa, I am excited to partner with the V&A Waterfront in Cape Town. It is an iconic location in an iconic city, and will be situated in a historic landmark building. This will make my collection accessible to local, national, continental and international audiences.”

Douglas says that this year, more galleries from Africa and Europe will participate in the Joburg Art Fair, but the core theme will remain African. England, France, Germany, Mozambique, Nigeria, Spain and Zimbabwe will be represented, and so far 33 galleries have confirmed their attendance, 11 of which are new to the event.

“One of Artlogic’s primary aims with the FNB Joburg Art Fair is to grow the audience for art from Africa,” he says.