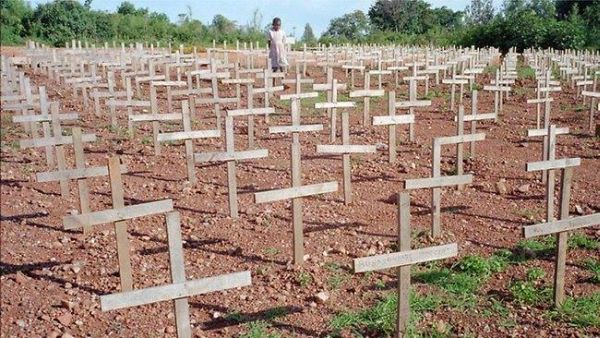 Earlier this month, the world paid homage to victims of the Rwandan genocide that took place 20 years ago. In Johannesburg, survivors gathered at Ditsong National Museum of Military History to share their stories and try to understand the terror that once shrouded their country. (Image: Rwanda Genocide 20th Anniversary Facebook page)

Twenty seasons of mourning: this is a day that cannot be forgotten. Pain fills his eyes as he grips the side of the lectern; his mouth is dry as he struggles to get the words out. Emannual Mwezi is reliving his experience of the Rwandan Genocide.

At a harrowing event, commemorating the two decades since the 1994 bloodbath, holocaust and genocide survivors sat side by side embracing hope and trying, desperately trying, to understand the conflict, their country torn apart and their lives once ruled by terror. Held at the Ditsong National Museum of Military History, in Johannesburg, on 9 April, Rwandan music, melodiously playing in the background, washed over throngs of people, who gathered to pay tribute to those who had been killed.

Yvonne Dusabirane, a survivor, spoke softly in her lilting French accent. “Twenty years ago still feels like last night, when a million Rwandans lost their lives in a hundred days of darkness.” She focused on the future and gently said that we must remember that now was a time not to express hurt, but to give respect to ourselves and continue our own growth. She implored the eyes staring at her, to say never again to genocide, to hope for a better tomorrow. She quoted Martin Luther King, and said: “Love is the only force capable of transforming an enemy into friend.”

About 85% of Rwandans are Hutus, but the Tutsi minority has long dominated the country. In 1959, the Hutus overthrew the Tutsi monarchy and tens of thousands of Tutsis fled to neighbouring countries, including Uganda. A group of Tutsi exiles formed a rebel group, the Rwandan Patriotic Front (RPF), which invaded Rwanda in 1990. Fighting continued until a 1993 peace deal was agreed.

On the night of 6 April 1994, a plane carrying then president Juvenal Habyarimana, and his Burundian counterpart, Cyprien Ntaryamira – both Hutus – was shot down, killing everyone on board. Hutu extremists blamed the RPF and immediately started a well-organised campaign of slaughter. The RPF said the plane had been shot down by Hutus to provide an excuse for the genocide.

Tali Nates, the director of the Johannesburg Holocaust and Genocide Centre, was moved to see so many survivors coming together to commemorate this time. She had recently returned from Kigali, the Rwandan capital, where the country was observing and remembering the genocide. She said it was a very emotional time, as she had met survivors. “I was at the Amahoro Stadium in Kigali and UN Secretary-General Ban Ki-moon spoke of the silence of the international community. He said: ‘We could have done much more, we should have done much more.’ [Ban] said the world had to overcome a lot. There is a truth to the human condition as alarming today as it was then. He asked: ‘Are we doing enough? Look at Syria; are we doing enough?'”

Nates quoted African Union chief Nkosazana Dlamini-Zuma, also in Kigali, who said: “We owe it to our children and to our children’s children to remember the 300 000 children killed… I am standing in solidarity with all of you tonight; the genocide was a dark time in history.” Nates pointed out that the Hutu extremists worked at three times the speed of the Nazis, slaughtering 800 000 Tutsis to remove them from shared land.

Down south, at that time in 1994, citizens in South Africa were overjoyed, celebrating the country’s new democracy while on the other side of the continent machetes and fear reigned. It is a wrenching comparison that cannot be ignored as South Africa marks 20 years of its rainbow nation.

Nates is a passionate advocate of human rights. Learning from the past, she feels strongly about creating a better future, one in which such hatred and violence do not exist. “The words ‘never again’ are still not a reality.” Nates said she felt privileged to be working with Rwandans as it was a process of learning together. “The Holocaust and Genocide centre is a place of memory, a place of legacy and a place of education. Education is one of the only answers available to us. We need to become activists, up-standers. We need to honour the strength and resilience of the survivors. Our human spirit can survive the darkest moments,” she said.

The Rwandan Genocide, much like the Holocaust was carried out with meticulous organisation. Lists of government opponents were handed out to militias, who proceeded to kill them, along with their entire families. Neighbours killed neighbours and some husbands even killed their Tutsi wives, saying they would be killed if they refused. At the time, identity cards had people’s ethnic group on them, so militias set up roadblocks where Tutsis were slaughtered, often with machetes, which most Rwandans kept around the house. Thousands of Tutsi women were taken away and kept as sex slaves.

Searching for the strength to relay his story, Mwezi labelled himself a lucky Tutsi. “Twenty years ago I was nine years old. In 1990, my father was burned alive as he was accused of being a collaborator. At this time, my entire life changed.” His eyes were solemn as he remembered 7 April 1994, his mother saying: “This will be hard to survive.” A Hutu neighbour took in Mwezi, his mother and his siblings and hid them in his house. Days later, the cousins of this good neighbour came to visit, and discussed their urgent desire to find the family that had abandoned the home next door. They described the most frightening ways in which the family was to be killed. Mwezi said that sitting there, able to hear what they were saying, was the most scared he had ever been in his life.

The neighbourhood was on the prowl, searching for them like predators waiting for a kill; they had to leave the neighbour’s house and disperse. He and his two brothers went to the lake; his mother and sister went in the opposite direction. He said you always knew when they were coming to hunt down Tutsis as you could hear the excitement of their dogs.

The three brothers would literally stay in the lake so they would not be found. “It was so cold, freezing, but it was better to have the cold, than be killed. We saw them killing a woman with a machete, we saw them celebrating afterwards. One of them said: ‘Nowhere in the Bible does it say it is bad to kill the Tutsis.'”

In Johannesburg, at his retelling, you could have heard a leaf rustle outside, the auditorium was so quiet, captivated by each word Mwezi said. Eating anything they could find to fill their stomachs, the brothers returned to their abandoned house, where they met their mother and sister. His mother said: “Let’s just stay here together and if we get killed, at least we are together.” Fortunately they were the lucky ones.

He said: “Many Hutus saved people during this time.” He wanted to tell others survivors that if you could survive machetes, you could be strong and keep your head held high. He concluded by remembering family and friends – his father, sister who was macheted and cut open while pregnant, his grandparents, his uncle, his best friend: “I remember people who don’t have anyone else to remember them.” The audience was still except for a bag opened to retrieve a tissue or a racked heave trying not to burst into tears.

HE Vincent Karega, the high commissioner of the Republic of Rwanda to South Africa, said this event was a demonstration of solidarity. “We must remember, unite and renew. The future generations can’t fall into this trap. We must resolve our differences in Rwanda to move forward in togetherness and nation building… We must shape a common destiny… We need to reposition ourselves as relevant. In April the mood is sombre in Rwanda, there is great trauma, many widows and orphans.” But he stated emphatically: “There are immense challenges but we do see signs of hope.

“We must honour the memory of the deceased; it must be a place of never again. It is not yet a normal country; it is time to dig deep into our consciousness, time to know how we stand for our cause. Let’s work together for a common vision. Together we can build a better world for hope.”

Two decades ago, Rwanda was a place of violence and in just 100 days, hundreds of thousands of Tutsis were killed. Their lives were taken in hideous ways, simply for being Tutsis or sympathisers. It is important that no matter how difficult the memory is, we need to keep it alive.

Advocate Lawrence Mushwana, the chairperson of the South African Human Rights Commission spoke of how he went to Rwanda a few years after the genocide. “It was horrifying what happened, but the healing process will succeed.”

Concurring with the UN secretary-general, he said: “In 1994, the international community collective failed to help. More should have been done to help; there was ample warning of an impending massacre but nothing was done.”

He reiterated that it was important to protect those who suffered persecution and discrimination. “The Rwandan Genocide was a culmination of a long history of issues not dealt with. There is life after genocide and hopefully this will never happen again… South Africa will always help. As leaders in the field of human rights, we will participate for peace.”