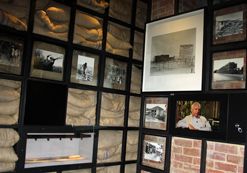 Telling the stories of the early farmers. 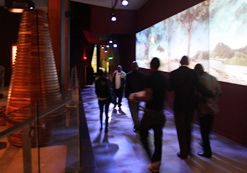 Displays on the walkways. 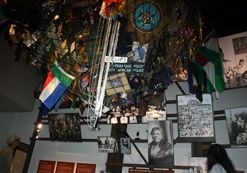 Reflections of South Africa’s apartheid past. 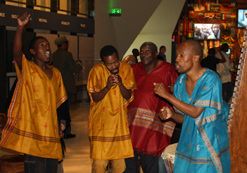 A comprehensive African story beginning 3.6 billion years ago, about creation and the great struggles faced by the people of the continent is unpacked in the //hapo, the last element of the Freedom Park Museum in the nation’s capital, Pretoria.

It was officially opened on Monday, 22 April by Deputy President Kgalema Motlanthe in the build up to Freedom Day, the annual public holiday on 27 April on which South Africa celebrates its first democratic elections. //hapo is a Khoisan word pronounced with a click, as Xapo. It means “a dream”. The installation gives a holistic view of the history of the African continent, yet the main focus is on southern Africa.

Speaking on the day, Motlanthe said //hapo was an important gift to the nation. “The historical importance of the opening of the //hapo centre resides in the symbolism it embodies for our nation. While //hapo is the product of our collective history, it also resonates with the imperatives of the present, as well as the edicts upon which our nation is founded.”

It also served as a tribute to Nelson Mandela: “The founding father of our democratic nation, former president Nelson Mandela is the patron-in-chief of Freedom Park, and so this museum also serves as a monument to his mighty legacy.”

The chief executive officer of Freedom Park, Fana Jiyane, said the museum would be extensively marketed to boost visitor numbers. “Currently visitors numbers are very low. We have about 200 000 visitors annually. We expect this facility to be a major cash cow,” said Jiyane.

There are 2 500m2 of exhibition space at //hapo. The //hapo’s story is divided into seven epochs: Earth, ancestors, peopling, resistance and colonisation, industrialisation and urbanisation, nationalism and struggle, nation building and continent building. As complex as the story can be, this narrative tells it with distinction; it blends culture, history and spirituality.

Wide-ranging methods were used to bring the story to life, including a high-tech interface touch screen with information readily available, flat screen monitors that play pre-recorded interviews with various experts and ordinary people, and use of objects such as fossil and rocks.

Story tellers are also on hand, and to enhance the stories films, animation, interpretive and archival, are also used. Engraved on the walls in the reception area of //hapo are the words: “//hapo ge// hapo tama // haohasib dis tamas ka I bo,” which means “A dream is not a dream until it is shared by the entire community.”

In the first layers of //hapo is epoch one – Earth. It tells a story of creation and how “ubuntu” or humanity was born in an animated film screened on a huge 3D flat screen monitor. A story delivered in a voice-over explains the origin of the Earth. It explores the earliest forms of life in southern Africa and the geological origin of the land itself. Rocks believed to be among the oldest, sourced from across the continent, are on display.

The second epoch, ancestors, delves into how African people are connected to their ancestors and various ways they communicate with them. It also follows the old age rituals they performed and how some of them have survived until today. This epoch goes on to explain how African people perceive death as the beginning and not the end of human existence. Ordinary people and researchers’ points of view about ancestors were recorded and are played through digital screens.

Epoch three, peopling, focuses on South Africa before colonisation. It presents the many vibrant civilisations and ideas that emerged on the continent over its long history, which influenced development in the modern world. This is demonstrated through evidence such as rock art, artefacts and other archeological remains.

It also tracks conflict over natural resources and struggles for control by various groups and movements in South Africa and how that resulted in early settlement patterns. It explores trends in culture and language, and looks at early modes of production and trade systems.

Epoch four, resistance and colonisation, highlights how indigenous people used their own systems to resist the political, social and economic impositions of colonialism. It tracks how the arrival of Europeans in the late 1400s changed the African way of life, where people cultivated, hunted, gathered and bred life stock. Backed by research, it shows how scores of Africans were driven off their land and enslaved.

In this section, a range of items are used to tell the history of the times. There are signs reading “Net blankets, Europeans only” and “White only” which were put in various public spaces such as parks and on bus stops to enforce separation and deprive black Africans.

Epoch five, industrialisation and urbanization, deals with the story of large scale exploitation of minerals during colonisation and its impact on settlement. It reveals how black Africans were used for cheap labour by factory owners and famers during the colonial governments. The cruelty of how these governments used legislation and taxation to ensure black Africans were stripped of their land is exposed.

The story of the discovery of minerals and their impact on the African story is also told in this section.

Nationalism and struggle is the focus of epoch six. It looks at the contesting forces of white state formation and the struggle for a democratic society as a backdrop to the birth of the new South Africa.

Finally, epoch seven looks at nationalism and continent building. In this section, visitors learn about the myriad freedoms that are enshrined in the Constitution. It is a story from the last decade of the 20th century and explores the transition from the tyranny of apartheid to constitutional democracy.

It also gives a holistic view of events leading up to liberation, such as Codesa. Pictures of freedom fighters such as Govan Mbeki, Solomon Mahlangu, Robert Sobukwe, Steve Biko, Nelson Mandela and many others are splashed on the walls.

In epoch seven, there is also a Truth and Reconciliation Commission (TRC) booth, which has variety of video footage. The TRC was set up by the government of national unity after apartheid was abolished to help victims of human rights violations find closure. They were invited to give statements about their experiences and some were selected for public hearings. Perpetrators of violence could also give testimony and request amnesty from both civil and criminal prosecution.