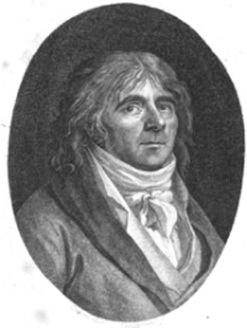 A portrait of Francois le Vaillant, the French explorer and naturalist. 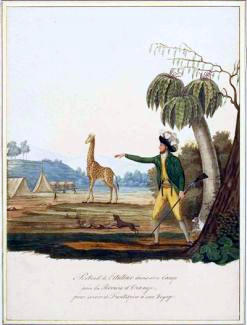 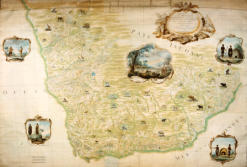 “I returned, so to speak, to man’s primitive state, and breathed, for the first time in my life, the pure and delicious air of freedom,” wrote the explorer, naturalist and social commentator, Francois le Vaillant, of his adventures in South Africa, between the years 1781 and 1784.

Le Vaillant was instrumental in creating a large, painted cotton map of South Africa for the French monarch, King Louis XVI, measuring some 3m by 2m in size. It is the centrepiece of the exhibition The King’s Map, Francois le Vaillant in Southern Africa: 1781-1784, which is on at the Iziko South African Museum in Cape Town until the end of May.

Drawn 222 years ago, this is the first time the map has been seen in public, thanks to former French ambassador Jacques Lapouge, who was the driving force in getting permission for it to be brought to South Africa.

The exhibition is part of the French Season 2012/2013, a multifaceted bilateral collaboration between France and South Africa. Its purpose is to strengthen relations between the two countries through exchanges of cultural, commercial and social initiatives, while promoting an awareness of French culture through a series of events and exhibitions.

Recognised as the first modern ornithologist and taxidermist, Le Vaillant produced watercolours and maps, and captured his adventures in a number of volumes on his return to France. In these, he painted a picture of the peoples of South Africa at the time.

The exhibition is curated by Ian Glenn, the professor of media studies at the University of Cape Town. He has written extensively on Le Vaillant, including a biography on his military career, his role at the Cape, and his political affiliations during and after the French Revolution. He has also co-authored two books: François Levaillant and the Birds of Africa (2004), and Travels into the Interior of Africa via the Cape of Good Hope, Vol 1 (2007).

“When I first learned that there had been a map lavishly produced under the instruction of François le Vaillant for King Louis XVI in 1790, I was determined to see it,” says Glenn. “The map, originally stored in a naval archive, had been moved from one archive to another to escape destruction during World Wars I and II in France.”

He finally traced it to Paris. “When I eventually saw it in the map archives of the Bibliothèque Nationale in Paris, I hoped a South African public would one day share my pleasure in the most beautiful and striking map ever produced of Southern Africa.”

But there was some doubt about it being taken out of storage and displayed, given its value and fragile state. “We owe an enormous debt to the French Cultural Services in South Africa for persuading the Bibliothèque Nationale to let the map [be] exhibited in the land that inspired it,” Glenn adds.

The map is on show alongside with other rare and valuable works by Le Vaillant, including a selection of watercolours belonging to the Library of the South African Parliament in Cape Town, original bird illustrations for his Oiseaux d’Afrique and elephant folio versions of his bird books from the Brenthurst Library in Johannesburg.

The biodiversity and range of animals he came across while travelling in the interior is depicted on the map, including three that are now extinct – the kwagga, the Cape warthog, and the bloubok. It contains 66 illustrations of animals, birds, and plants, as well as four cartouches or decorative panels showing different indigenous groups he encountered.

Le Vaillant left an impressive legacy – besides the bird books, illustrated maps, travel accounts and paintings, he took back animal specimens, in particular the skeleton and skin of a giraffe. To acknowledge his taxidermy skills, a huge stuffed giraffe greets visitors at the entrance to the exhibition.

It also has interactive elements – a video with modern day images of the places he recorded on his map, an interactive display of the map on touch screens, and a large replica of his map on the floor at the entrance, allowing visitors to walk the routes he travelled.

The house in which Le Vaillant stayed for part of his sojourn in Cape Town, Rust en Vreugd, and where he catalogued his collections, still exists. Today, it is one of the 12 Iziko museums in Western Cape. The late 18th century townhouse is on Buitenkant Street in the city bowl.

His journeys took in the colony and its boundaries: one was made around Cape Town and Saldanha Bay; another out eastwards from the Cape, lasting 16 months; and on the third he journeyed north of the Orange River and into Great Namaqualand.

There is a possibility that a replica of his map will be made and put on permanent display in Rust en Vreugd.

His publications were widely distributed in Europe, introducing the southern African interior to Europeans. They helped to dispel incorrect perceptions of Africa. His illustrations also often influenced scientific names, and he named several birds. He sent over 2 000 bird skins to Europe.

On display in the exhibition are illustrations of Cape Town; an image of Kees, a tame baboon that travelled with him; several camps at Plettenberg Bay and the Great Fish River; wagons crossing the Olifants River; and of the beautiful Narina, a Gonaqua woman with whom some say he became infatuated. The rare Narina Trogon bird is named after her. A friend and hero to Le Vaillant, the Hottentot Klaas, is portrayed looking regal and elegant. Klaas saved Le Vaillant’s life.

Several exquisitely detailed botanical images line the walls. Alongside some of the bird illustrations are musical annotations – his efforts to describe the song of the particular bird. Le Vaillant pioneered the display of stuffed birds in lifelike poses.

“Le Vaillant played a major role in establishing how Europe saw the Cape,” explains Glenn. “He attempted to represent his South African experience in many ways – from the production of specimens, to lavishly illustrated bird books and travel accounts, and to innovative maps.

“In so doing, he created more than a single influential text, but rather a range of texts that shaped what came after him, both here and elsewhere. This work helped shape many modern media, genres and intellectual traditions. In many ways Le Vaillant is a founding figure of South African culture.”

Le Vaillant died at the age of 71 in his country house in France.