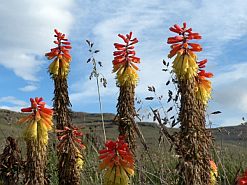 The UN has declared 2010 the International Year of Biodiversity (IYB), and South Africa, with its wealth of natural treasures, is set to mark the event along with the rest of the world.

The year-long celebration of the variety of life on earth is driven by the Secretariat of the Convention on Biological Diversity (CBD), under the slogan Biodiversity is life, Biodiversity is our life.

The CBD, a global plan to tackle important issues facing biodiversity, entered into force in December 1993. The secretariat exists to facilitate meetings of the parties to the CBD and to coordinate with relevant international bodies.

South Africa became a signatory to this important convention in 1993, and a party in 1995. The country has since ratified the instrument, which means that it has been approved by Parliament and is now binding.

The IYB will be officially launched in Berlin on 11 January under the auspices of Germany’s Federal Environment Ministry.

Its goals are to raise awareness of the importance of conservation and threats facing natural life, promote understanding of the economic value of biodiversity, encourage organisations and individuals to step up their conservation activities, celebrate achievements, and to forge an effective plan going forward from 2010.

The CBD has stated that global biodiversity is in the throes of the greatest extinction crisis since the demise of dinosaurs 65-million years ago.

Some experts estimate that precious species are disappearing at up to 1 000 times the natural extinction rate, and worse, the CBD predicts a dramatic rise in the already-frightening rate. Current trends show that around 34 000 plant and 5 200 animal species face extinction at this moment, and that 66% of ecosystems around the world are approaching ruin. Now is the time to act.

The IYB also coincides with the 2010 Biodiversity Target, an international conservation agreement to significantly reduce the global biodiversity drain due to often-irresponsible human activity. The target was first adopted by the EU in June 1991 and later confirmed at the World Summit on Sustainable Development held in Johannesburg in 2002.

Announcing the IYB, executive secretary of the CBD, Ahmed Djoghlaf, said not one country had met the terms of the target, which were to achieve, by 2010, “a significant reduction of the current rate of biodiversity loss at the global, regional and national level as a contribution to poverty alleviation and to the benefit of all life on earth”.

The International Union for Conservation of Nature’s Countdown 2010 branch has brought together around 1 000 participants – representing governments, civil society and corporations – to work towards achieving the 2010 biodiversity target.

Although South Africa covers just 2% of the world’s surface area, it is home to nearly 10% of all the world’s plants, which amounts to 24 000 species. About 7% of the world’s vertebrates and 5.5% of all known insects also call the country home, making it a biodiversity treasure trove.

Within its borders lie three internationally renowned biodiversity hotspots. These are the magnificent Cape Floral Kingdom, the Succulent Karoo – which flows into Namibia, and the Maputaland-Pondoland-Albany region. Maputaland-Pondoland is shared with Mozambique and Swaziland.

South Africa is also famed for its marine biodiversity. About 11 000 species – some 15% of the global total – dwell in South African waters, with 3 496 species, or over 25%, endemic to the country. South Africa is the fifth richest country in Africa and 24th in the world in terms of the number of mammal, birds, amphibians and reptiles that are native to her soil.

The South African government is well aware of the immense value of the country’s biodiversity, and between 2003 and 2005 developed and implemented a National Biodiversity Strategy and Action Plan. This document, overseen by the national Department of Environmental Affairs, identified nine areas for conservation priority and also laid out steps to conserve freshwater, estuarine and marine ecosystems.

The country’s Biodiversity Act was signed into law in 2004 by then-president Thabo Mbeki, providing biodiversity protection at the highest level. Among others, the act calls for full environmental impact assessments before the development of any genetically modified organisms, and also permits communities to benefit from any profits gained through exploitation of natural materials, such as medicinal plants, that involve their indigenous knowledge.

In addition to the numerous environment-aware celebrations in South Africa each year, the country is hosting the Biodiversity Expo 2010, a gathering which will explore the work currently being done in that field, and establish what more needs to be done.

South Africans are encouraged to attend, if possible, and to broaden their knowledge of biodiversity, perhaps even becoming involved on a volunteer or career basis.

The expo takes place from 25-28 March 2010 at the Kirstenbosch National Botanical Garden in Newlands, Cape Town. This well-known research institute and tourist drawcard is part of the South African National Biodiversity Institute.

South Africa will mark the following environment-related events in 2010:

The UN Environmental Programme has teamed up with sportswear manufacturer Puma in an IYB campaign to support Africa’s vulnerable plants and animals, and raise awareness of the year-long event among football fans.

The 12 teams will also wear the Fifa-approved strip during friendly games in the build-up to the 2010 Fifa World Cup, which kicks off on 11 June in Johannesburg.

The Africa Unity Kit debuts at the 2010 African Cup of Nations football tournament in Angola between 10 and 31 January. All profits from worldwide sales of the replica kit will support biodiversity programmes in Africa. Besides the kit, other items such as Unity t-shirts and lacelets – collectable shoe laces featuring patterns from leading American artist Kehinde Wiley – are available.

“In 2010, Africa will be at the centre of the footballing world. The Play for Life campaign and the release of the Africa Unity Kit is a powerful statement for Puma,” said the company’s CEO Jochen Zeitz.

“Puma is creating a unique kit embracing the diversity of African teams while valuing the unity of players and supporters towards a common goal – raising both awareness and funds through the sale of our Unity products,” he said.