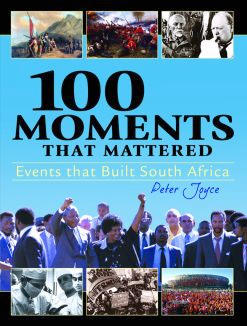 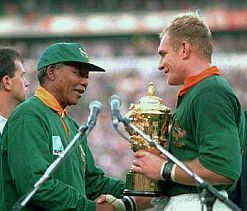 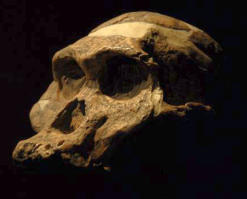 The cast of Mrs Ples, one of South Africa’s many famous fossil specimens of the hominid species Australopithecus africanus.
(Image: MediaClubSouthAfrica.com. For more free photos visit the image library)

South African author Peter Joyce has written an accessible history of South Africa, told through 100 unforgettable moments that shaped the country over centuries.

Each entry in 100 Moments That Mattered: Events that Built South Africa is presented in a concise format and illustrated with beautiful photographs. Many people will recognise the iconic snapshots, such as the last farewell when former president Nelson Mandela stepped down; that handshake between the former statesman and Francois Pienaar at the Rugby World Cup in 1995, and the aerial photo of South Africans queuing to vote in the country’s first democratic elections.

Anyone who is interested in popular history, general reference and the story of South Africa and its people will enjoy the book.

But 100 Moments isn’t just an account of the country’s political past – it also contains milestones in technology, medical breakthroughs, culture, entertainment, palaeontology, sport, as well as a few humorous moments.

Peter Joyce is a specialist history writer, but he’s also written numerous books about travel and wildlife. Among his books are the bestselling South Africa in the 20th Century and The Making of a Nation, and other titles such as 100 Memorable Sporting Moments; This is Namibia, a visual essay on the country, its peoples and wildlife and Discover South Africa – An Illustrated Traveller’s Companion.

100 Moments That Mattered: Events that Built South Africa can be purchased online, for R190 (US$22), or at bookstores countrywide.

Joyce says it was difficult to decide what to include and which events to leave out. With great difficulty, the author along with his editor, Ronel Richter-Herbert and her colleagues carefully selected what is in the compilation today.

“The trouble was, I knew there were some wonderful tales to tell from the pre-colonial era, but they simply weren’t recorded,” Joyce says, adding that up until the 1990s, under the apartheid government, many events seldom received any coverage at all.

“My main difficulty was the need to include the most important events, which were sometimes dull and had to be presented in an interesting, or at least readable, way,” he explains.

Joyce says he wrote 100 Moments because he loves the past in all its forms. “History is simply a collection of stories, sometimes enthralling ones, and on the assumption that most of us like a good story I’ve tried to tell a few,” he says.

“It is the most human of stories. It tells us who we are, shows us the good, the bad, the brave, the timid, the clever, the stupid.”

The good, the bad and the ugly, made accessible

The book is divided into seven parts, and includes well-known events such as the Great Trek; the birth of Johannesburg; the 1918 Spanish flu outbreak which killed 140 000 people in seven weeks in South Africa; the apartheid years and events such as the defiance campaign, the Sharpeville massacre and Mandela’s release from prison.

Joyce also included sporting events such as the 2010 Fifa World Cup and the Rugby World Cup for the unifying effect that they had on South Africans. There are also tributes to talented sportsmen such as cricket all-rounder Basil D’Oliveira and boxers Brian Mitchell and Baby Jake Matlala.

There are also some unexpected entries, such as the story of Johannesburg’s Market Theatre, once the old ‘Indian’ fruit market which was transformed in the mid-1970s to give a platform to local actors, irrespective of skin colour, to perform to multiracial audiences.

Music, art, culture and literature also feature prominently, with the story of Drum Magazine, and its role as a platform for a new generation of writers and photographers who changed the way black people were represented in society.

“Things like music, literature, theatre and sport are just as important in shaping society as politics and warfare,” Joyce explains.

“Township jazz brought joy to an otherwise pretty joyless situation and kept apathy at bay. And would we be as unified as we are if we hadn’t won the Rugby World Cup in 1995?”

The book honours a range of iconic South Africans and foreigners who made an impact, including Mahatma Ghandi; Chris Barnard who completed the world’s first human heart transplant; renowned storyteller Herman Charles Bosman; activist and politician Sol Plaatjie, poet Eugéne Marais and Emily Hobhouse, a British welfare campaigner who spoke out about the appalling conditions of the British concentration camps in South Africa built for Boer women and children during the second Boer war.

Joyce took care to ensure the book is balanced, including a mix of positive, negative and, of course, some humorous moments.

One such entry is the tale of Jack the baboon. “I just had to slip him in,” Joyce says, explaining that story of the esteemed baboon is worthy of recording, not for its importance, but because it is quirky.

James Wide, a local railway guard who worked on the Uitenhage line near Port Elizabeth in the Eastern Cape, lost his legs when a train ran over them in 1877. His was a lonely job, and Wide’s disability made it difficult for him to move around.

One day he adopted an orphan chacma baboon, which he named Jack, as a companion. Later, Jack learned to control the train signal box and assisted Wide as a signalman. The beloved baboon was paid a wage in food, toys and some liquor. He died after 13 years of honourable service.

History helps us to remember the past

Joyce hopes that the book will encourage a renewed interest in history among South Africans, particularly people who wouldn’t ordinarily read history.

“The subject is losing ground all around the world and especially in Europe,” he says.

“I believe history is vital part of shared knowledge, but one doesn’t want to say that people ‘should’ be interested. If a culture wants to abandon its heritage, it should be allowed to do so.”

He believes history has the important task of reminding people about what happened in the past.

“It comes back to that old chestnut – those who forget the past are doomed to repeat it,” he says. “Those who use the past as both an example and a cautionary tale can do a lot of good.”

South Africa’s transition from an oppressive apartheid regime to a democratic country is one event that made a lasting impact on the world.

“I wonder if the Northern Ireland crisis could have been so well resolved if people hadn’t drawn conclusions from Mandela’s statesmanship and those long and painful talks of the early 1990s.”