Fourteen years after South Africa’s transition to democracy, many children in the country still don’t get the chance to play certain sports – such as tennis – because of the cost of equipment and facilities.

A former South African, now a tennis coach at the University of North Carolina Wesleyan in the United States, is spearheading an effort to create opportunities for South African children to play the game.

Brian Modise’s initiative, Tennis Shoes 4 Africa, aims to “patch lives in South Africa – one pair of shoes at a time”.

“Our goal is to make a difference in kids’ lives – to give them a chance that we already have had,” Modise says on the Tennis Shoes 4 Africa website. “Tennis is an expensive sport, and for a young African kid it is impossible to reach their goals without resources.”

Modise speaks from first-hand experience. He grew up in Mmabatho in South Africa’s North West province in the days of apartheid.

He remembers cutting up bicycle tyres to patch his tennis shoes, which he used until the toes were worn through. The balls he played with were threadbare, and the only time he ever saw new balls was in tournaments. Sometimes broken strings meant having to take an enforced break from the game.

Despite the difficulties, Modise didn’t stop dreaming of bigger and brighter things in the tennis world.

“I always dreamed of becoming a professional tennis player and/or playing college tennis,” says Modise. “Some people thought I was crazy but I followed my instinct and dreams. I remembered when I came to America on a tennis scholarship, it was surreal for me. I couldn’t believe that it was happening to me.”

“It exposed me to great things and helped me to realize that anything is possible.

“I do believe it is time for me to give back. I have helped a lot of kids to come to the United States on tennis scholarships, but there are kids who still need help to improve their lives.”

After moving to UNC-Wesleyan in 2007, Modise started the Tennis Shoes 4 Africa programme in January this year.

One of an increasing number of supporters of Modise’s drive is Gloucester County College in New Jersey. Captain of the Gloucester County Roadrunners, Sean McAvinue, says he and his team are taking the story to people in their area.

McAvinue says it’s great to know they’re helping people on another continent and to see the work done by the students at UNC Wesleyan. Modise, he says, has been through some hard times and has an interesting story to tell.

Gloucester County coach Brian Rowan explains: “We’ve been looking for some community service program we could use with our kids over the last couple of years. I thought, being an international program, that it would open (the players’) eyes to things that maybe (being) at a junior college they normally wouldn’t think about it.”

Modise is set to visit South Africa in May to pave the way for another visit in November, when he will deliver funds, racquets and, of course, tennis shoes.

Ashley Ball, a member of the UNC Wesleyan tennis team, is hoping to accompany Modise in November. She is Tennis Shoes 4 Africa’s ambassador, and has been hugely impressed by Modise.

“I have played tennis all three years that I have been here (at UNC Wesleyan),” Ball writes on the programme’s website. “We went through coaches and finally were blessed with Dominic Modise.

“I was sincerely touched by his strength, not just with tennis but with life. He is a great coach, mentor and, above all, friend.

“To hear about his youth in South Africa, how he never played with tennis shoes, and ended up coming here to America where he played and coached college tennis, really made me think,” Ball writes.

“I am also an honours student here, and we have to write an honours thesis in order to graduate NCWC with honours. I am hoping to use your donations to go to South Africa with Coach Modise this summer and write my honours thesis about my experience there.”

Tennis Shoes 4 Africa says shoes in any condition are acceptable for the programme; if they’re in poor shape, they will repair them. They’re also welcoming equipment besides shoes, racquets and balls, such as clothes and strings.

The equipment will be shipped to Mmabatho, where Modise grew up. He believes it could make a big difference in the lives of young children.

“I do believe that you can make an impact in the life of young people in Africa,” Modise writes. “You can make a difference by donating a pair of shoes. It doesn’t have to be a new pair, but any pair can help.

“If you have old tennis balls or old tennis racquets, we will highly appreciate the donation. I urge you to look in your closet at the shoes you don’t wear anymore, or think about all of the dead balls that you throw out.

“These simple donations can help brighten a child’s day in South Africa. It is time to make change and make an impact in the lives of young African kids.” 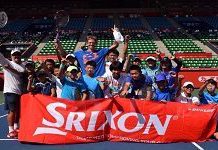 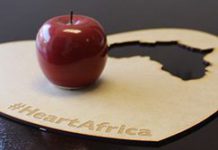