South Africa magazine, the first magazine to bring SA to the international market, was launched in the UK in July, targeting property owners, tourists, potential investors, as well as “anyone who enjoys the vibrant culture of this unique destination.

“South Africa is more than a destination, it’s a life-changing experience,” London-based ZA Publishing said in a statement. “South Africa magazine captures the vibrancy of the South African culture, its people and its breathtaking beauty, while offering its readers advice on property, investment, business, immigration and holidays.”

“As publishers of specialist SA publications we have watched the international interest in SA grow over the past decade,” ZA Publishing MD Johan Govea told Bizcommunity.com last month. “With the 2010 Fifa World Cup approaching, the spotlight is now firmly fixed on this exciting emerging democracy, which also serves as a gateway into the rest of Africa.”

Highlights of the first edition included a journey through SA’s World Heritage Sites with nature photographer Tim Hauf, an in-depth look at the stadiums being built and renovated for the 2010 World Cup, a sneak look inside “the ultimate Cape Town beach house”, and a review of SA’s property market.

South African flavoured recipes also featured, along with SA’s top 10 restaurants, a visit to Wellington on the wine route, a look at the new Sauvignon Blancs coming out of the Cape, a column by actor and satirist Pieter-Dirk Uys, and an interview with Jamie Oliver’s right-hand man at Fifteen restaurant, Tony Elvin.

South Africa magazine editor Elizma Nolte told Bizcommunity that the publishers had tried to capture the diversity of the country. “We are showing the world that SA is about more than just wildlife safaris and Table Mountain,” Nolte said. “It is a fascinating world-class destination and deserves to be promoted more widely.” 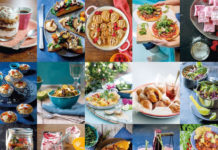