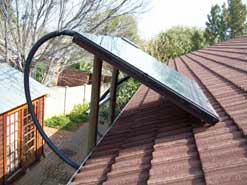 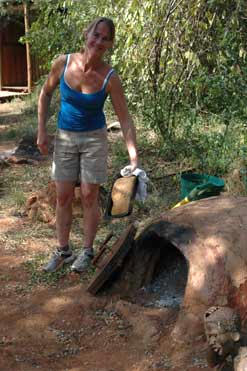 Louise Williamson and her family have not looked back since turning their home green. 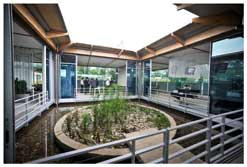 A view of the entrance to the Vodafone building. 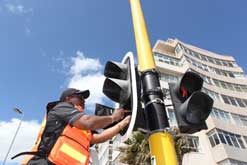 The City of Cape Town is leading the way in energy efficiency. Here an employee is retrofitting a traffic light in the city with LEDs.
(Images: www.eta-awards.co.za)

Every year in November South Africa’s energy utility Eskom rewards citizens who apply their minds and skills to inventing energy efficiency tools that don’t only help to keep energy consumption down but, in many cases, also address sustainable community development needs.

This year is no different, as the eta Awards 2012 ceremony in Kyalami, north of Johannesburg, proved. If anything, the judges had their hands full, according to the chairman of the judging panel, Prof Roy Marcus.

“The plethora of good ideas that came through made the judging difficult,” said Marcus. “What’s more, 90% of them are in fact working in the environment that we are so encouraging.”

He urged the audience to go out and believe in what South Africa can produce in terms of energy efficiency projects.

Delivering the keynote address, Eskom chairman Zola Tsotsi cited the work that his organisation has done over the years to move towards more energy efficient solutions, not only within the company, but in encouraging South Africans to adopt a greener approach to their lifestyles.

“The eta finalists have proven that it is possible to offset price increases through energy savings,” said Tsotsi. South Africa’s electricity pricing is rated among the world’s highest, and almost 90% of its electricity is generated in coal-fired power stations. Recent media reports have indicated generally negative response to a proposed 16% tariff hike every year for the next five years.

Speaking of efforts to seek alternative energy sources, Tsotsi said since 2005, Eskom had rolled out energy efficiency projects that have brought environmental and economic benefits for the country.

“Over 3 000MW has been taken off the national grid, mainly from the installation of compact fluorescent lamps around the country,” he said.

The industrial sector, he added, had also been supportive, and through its intervention 600MW has been saved since the beginning of the initiative through the implementation of energy efficient technologies and energy management.

“Turning ideas into action depends on us,” said Tsotsi. “There is no time like the present to power a brighter future.”

Continuing its effort to encourage energy saving among residents, Eskom introduced the Energy Saving in Households category to the etas in 2011. This year the award went to the City of Cape Town’s Public Lighting Retrofit Programme, which has seen the municipality retrofitting all its traffic lights from incandescent luminaries to LEDs in an effort to reduce carbon emissions.

“Since 2009, 15 370MWh-a-day have been saved, which is almost the equivalent of 17-millionMWh a year,” explained Sumaya Mohamed from the City’s environmental resource management division.

From the example of Cape Town to private companies in a range of industries, to community development initiatives and school groups, all nine categories of the awards were represented by innovative ideas that Tsotsi contended South Africans can learn a lot from.

The Young Designers category’s repertoire of entries saw several young people show initiative and imaginative thinking in their approach. So popular was the category, receiving many entries from budding young scientists that the judging panel decided to split it in two, for individuals and groups.

A group of pupils of Bracken Hill EK primary school in Knysna – who designed a hotbox and a clay oven that requires a few twigs and a small amount of coal to heat it up – helped their community reduce its wood consumption by at least half, from its average 900 pieces per week.

To further their conservation efforts, the pupils also developed a system that allows them to make coal using recycled paper. This way the families in the Bracken Hill community would have a cost-effective alternative to regular coal.

To the east of Knysna, four pupils from Bay College in Plettenberg Bay named their team Girls Looking Forward, and their research was meant to determine the most efficient option for cooking, using a microwave, a stove top and the slow-cooking process.

The result was the invention of a hotbox that proved popular in their community’s crèches and soup kitchens, and had a wider social impact as these institutions expressed how the girls’ project had changed their perspective on energy consumption. They were winners in the Young Designers category: Group.

The winner in the individual section was 12-year-old Daniel von Eschwege from Bloemfontein in the Free State, who has entered his design in the Eskom Expo for  Young Scientists for three years.

Von Eschwege has created a solar geyser system that is affordable and will also benefit users by keeping its maintenance costs low.

Using high-density polyethylene (HDPE), or the black plastic pipe – which upon testing was found to be as efficient as the copper pipe used in conventional geysers – he is able to keep installation, construction and labour costs down.

The HDPE, which is coiled and fitted inside a solar panel and connected to a plumbing system, is mounted on the roof of a house to absorb as much solar energy from the sun as possible.

A separate eta section, the Energy Efficient Lighting Design Awards, also proved popular, with the judges selecting 19 finalists. These too were put into different categories: professional, special/amateur, scholar and student.

Nine-year-old Thomas Granig, a pupil at Johannesburg’s The Ridge Preparatory College, was the youngest winner of the night. His lighting design, in the scholar category, is named the LED Envirolight.

The base of his light is constructed out of balsa wood that supports the paper light shade which is held in place with a Pringles chip lid. Granig made holes in the base to fit an old torch switch, LED globe and wires to a transformer that he recycled from an old telephone with wireless handsets.

In the innovation category, victory went to the architectural team of Naina Sharad Marsai, Savier Huyberechts and Alison Grove from Grosskopff, Lombardt, Huyberechts and Associates, designers of the first Six Star Green Star-accredited building in the country. Mobile provider Vodafone now has an office block that is a prototype 350 square metre building for which all power is provided by solar panels, while the building generates its own electricity.

The winners in the other categories were:

Industrial – Magnet Electrical, an energy services company in KwaZulu-Natal that provided an ammonia heat pump for Rainbow Chicken’s plant in Hammersdale. The pump provides hot water as needed by the plant, but reduces the amount of power used to produce the hot water.

Commercial – the operations department of the V&A Waterfront Holdings in Cape Town has managed to turn the 85-building precinct into an energy efficient zone. This was achieved by installing lighting controls, energy efficient lighting and upgrading their air conditioning BMS, among other efforts.

Energy Efficiency Awareness – hosted by Gareth Burley, the Green Hour radio programme on community radio station Kingfisher FM in Port Elizabeth in the Eastern Cape, has been going for just over a year.

The programme creates awareness around energy efficiency and showcases good news stories and ideas, among other things.

Efficiency champion – Barry Bredenkamp, who worked for Eskom for 27 years before starting and committing in 2000 to a campaign to get South African households to turn to compact fluorescent lights. He now heads up the South African National Energy Development Institute.

Community – Billy Hadlow and the Seven Schools Club are joint winners of this category. Hadlow invented the Khaya Power, a 5l plastic container converted into a solar energy power pack that can supply energy to a house for up to eight hours. It contains a 12-volt battery, a DC socket and is fitted with LED lights. It is charged during the day for use at night.

The Seven Schools Club’s initiative is focused on a recycling campaign that sees pupils collecting recyclable waste to earn money for their schools .

Energy Saving in Households – Louise Williamson’s family was motivated by an unanticipated move from their old house into a new one to commit to living off the grid. It took six weeks for her husband to build their green home, where they use solar panels for energy, borehole water and to cook, an effort that has saved them R20 000 (US$2 260) over 56 months.

“The awards are a great platform to get people talking about becoming more energy conscious and also showcase the best South Africa has to offer in terms of energy saving innovations,” said Dr Steve Lennon, Eskom group executive of sustainability.