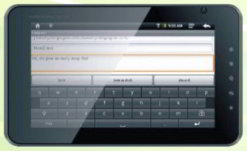 Local developer Wise Tablets, based in Centurion, has announced the imminent release of a new range of tablets that will cater specifically for the country’s consumer and educational needs.

The Wise Touch 1, a low-cost tablet designed especially with the average South African in mind, will be released on 1 December.

It ships with an array of applications that have been developed and pre-loaded on behalf of around 115 South African brands, and also features numerous educational programs.

A limited batch of tablets is expected in stores next month, while the tablet will be officially launched and distributed in February 2012.

The company has also recently added an eight-inch version, which is said to be a perfect size for handling, reading and web browsing. The price of this device has yet to be disclosed.

All tablets have a capacitative touch screen, a standard 3.5mm earphone jack, and a mini HDMI and USB port. Although on-board memory is modest, it can be expanded up to 32GB with a micro-SD card.

According to Wise Tablets MD Gian Shipton, the Wise Touch was developed to provide South Africans with a tablet that would allow them to shop at local retailers from their own homes.

“Most South African companies have a good web presence but have not migrated to tablets. Now the Wise Touch gives them a platform to be active on the tablet,” said Shipton. “These are brands people relate to.”

Though the tablets are manufactured in China – as is the Apple iPad – Shipton said they are made according to strict specifications and standards.

Different from the iPad and Galaxy

The Wise Shopping Mall allows users to shop for groceries, take-aways, movies, toys and books, do their banking, and access newspapers and magazines.

Shipton said that companies in developed countries and elsewhere in Africa are already expressing interest in the Wise Shopping Mall concept.

For a company to be included on the list of applications, Shipton said they would have to be nationally recognised and own a well-known brand.

Apart from the applications, which include the standard offerings for social media, multimedia and entertainment, Shipton has said that Wise Tablets’ other drawcard is a full local support service. Walk-in repair centres will also be opening soon, while sortware updates will be freely available.

Another tool added to the tablet is the omnibus communicator, a free application that allows companies to communicate with customers directly.

The Wise Education Centre is designed for schools that could use the tablet as a teaching tool.

Shipton mentioned that 50% of the Wise Touch strategy is to bring the tablet to the education sector. Wise Tablets have created a specific module that allows pupils to view documents, flash videos and load any other media.

The company already has access to most of the public school syllabus and some university content, all of which will be provided to pupils and students for free.

However, the content can only be used on the Wise Tablet because of encryption and digital rights management issues with content owners.

Competitors on the prowl

The Wise Touch is not the first low-cost tablet in South Africa nor is it the first to offer localised content. This is according to Arthur Goldstuck, the MD of independent technology research company World Wide Worx. In a recent ITWeb report, Goldstuck named the wi-fi only, R999 ($122) Colpad as Wise Touch’s major competitor.

The Colpad may not boast an extensive list of applications as found on the Wise Touch, but it trumps it with its price.

However, Goldstuck acknowledged the Wise Education Centre as a clever move as it will attract parents and students who want to avoid spending money on expensive textbooks.