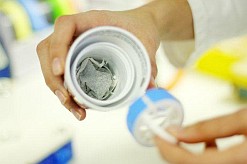 The filter is the same size as, and looks
exactly like, a normal tea bag. 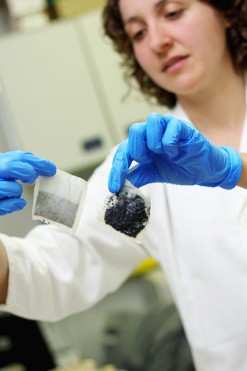 Each bag can filter about one litre of
polluted water, or about 10 litres of
normal tap water.
(Images: Jacques Botha)

Scientists from Stellenbosch University in the Western Cape have developed and patented an inexpensive and effective filtering device that could provide safe drinking water to millions of people. This innovation can considerably reduce the prevalence of water-borne illnesses such as cholera and other diarrhoeal diseases.

Prof Eugene Cloete, Dean of the Faculty of Science and chairperson of the Stellenbosch University Water Institute, says the filtering sachet combines years of research on water purification, nanotechnology and food microbiology into a practical filtration solution.

The sachet will provide easy access to clean drinking water for communities living near polluted water sources and therefore vulnerable to water-borne disease.

Cloete was inspired to develop the water filtering device when he saw technology developed by Dr Eugene Smit of the Department of Chemistry and Polymer Science. The technique, known as electro-spinning, applies high-voltage electrical fields to polymer solutions to weave ultra-thin fibres on a nanoscale. This causes the formation of fibres a thousand times thinner than a hair.

“Right away, my mind started churning through the possibilities of how it could be used to clean polluted water,” Cloete says.

Stellenbosch University polymer scientists and researchers from the Department of Microbiology jointly developed the disposable filtering device. The sachet, which is identical to a tea bag in shape and size, is made of the same biodegradable material as an off-the-shelf rooibos tea bag.

What makes this product distinctive is that the inside of the tea bag material is coated with a thin film of biocides encapsulated within tiny nanofibres (defined as fibres with diameters up to 100 nanometres).

A biocide is a chemical substance that kills all disease-causing microbes. Biocides are often used in medicine, agriculture, forestry and industry to prevent the fouling of water and oil pipelines.

The water is poured onto the sachet, which is filled with active carbon granules that remove all harmful chemical pollutants. The nanofibres create a pore size small enough to filter bacteria out of the water.

“The combination of nanofibres and activated carbon is a new combination that hasn’t been tried before,” says Cloete.

Once used, the bag is discarded and a new one is inserted into the neck of the bottle. Each bag can clean one litre of water from a river containing contaminated water or water of an unknown quality, making it 100% safe to drink.

There are also plans to commercialise the filter bag into a product that can be used by travellers or hikers, or even people who want to improve their water quality at home. Cloete says people living in cities can also filter their water using the sachet, but as the water would generally be cleaner, one bag could filter approximately 10 litres of water.

Dr Michéle de Kwaadsteniet, a postdoctoral fellow who is working on the project with Cloete and Prof Leon Dicks of the Department of Microbiology, says that they tested the filter with water taken from a river in the Stellenbosch area. The samples were highly polluted, but after filtering with the sachet, the water was completely clean.

The bag filter is also currently undergoing testing at the South African Bureau of Standards.

A solution to the continent’s water woes

Water quality is a universal problem and Cloete says that the world will increasingly come to rely on technologies such as these. In many countries on the continent and abroad, water infrastructure is lacking, faulty or aging.

“For many, piped water is a luxury and it is simply impossible to build purification infrastructure at every polluted stream,” he says.

South Africa is facing major challenges in meeting the rising demand for safe drinking water. The lack of adequate, safe and affordable water impacts on vulnerable groups such as the poor, the elderly, HIV/Aids patients and children.

“More than 90% of all cholera cases are reported in Africa, and 300-million people on our continent do not have access to safe drinking water,” says Cloete. “Clearly, something has to be done about this.”

The tea bag-like filter also is 100% biodegradable and has no ecological footprint. It is a “point-of-use” technology that, because it is used on the spot, can meet the needs of people who live in remote areas, or people whose regular water supply is not treated to potable standards.

In a statement, Prof Russel Botman, Rector and Vice-Chancellor of the university, said it is important that science should serve the needs of society. “By aligning the expertise of our scientists with the national and international development agenda, we want to become more relevant to society.”

The invention is one of the first major projects of the newly established Stellenbosch University Water Institute, a transdisciplinary initiative established to step up the search for solutions to the country and continent’s water problems.

The institute and the water filter invention form part of the Stellenbosch University HOPE project, a set of development goals aimed at improving the lives of South Africans and people in the rest of the continent.

Once all testing is complete, the team hopes that the filters can be made available to various communities. Cloete says one of the reasons they chose the tea bag design is that the same technology used to pack tea bags can also be used in production of the filtering sachets.  This is an economical and practical way to more easily get the product out into the market.

He says that they never expected so much interest in the product and since it has started receiving more exposure, they have been inundated with enquiries. Companies, aid organisations and philanthropists have also shown interest in the filter, and some are looking to purchase the sachets to distribute as part of their corporate social responsibility programmes.

The commercial pricing of the filter hasn’t been finalised, but it will be relatively inexpensive in comparison with similar purification technologies on the market. Distribution is expected to start in January 2011.

“This product can change the lives of ordinary people because it is so simple and efficient. It has captured the imagination of people and it is going to have an amazing impact,” says Cloete.