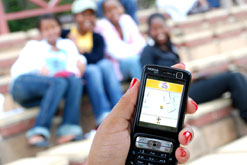 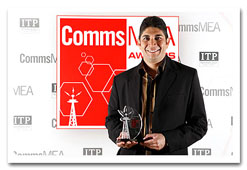 South African cellphone network operator Vodacom has introduced the latest in social networking platforms, The Grid, which  connects a user’s mobile with a web browser.

The location-based advertising network is a new marketing tool that uses tracking technology to determine where a user is at any given time, and so send out location-specific advertising.

Vodacom’s portfolio manager for social networking, Vincent Maher, says the system already has buy-in from top retailers. “For the launch of this product we have partnered with Nando’s, Sportscene, Jay Jays and Synergy pharmacies to deliver advertising within radii ranging from zero to 10km from your physical location, delivered via the web.”

Fast-food chain Nando’s has, for instance, tailored its advertising for each of their Cape Town branches, so that a different type of advert will appear in different parts of the city.

When the network picks up that a user is within range of a registered product, and is logged on to The Grid, a short message  appears with information about the physical location of the product, such as a supermarket or fast-food chain. The Grid was launched in February 2008, and is available to all mobile users.

Besides the marketing aspect, The Grid website allows users to share videos, leave text notes for friends and upload pictures on their profiles. It also tells them where their friends are at any given time, using the mobile mast triangulation.

The Grid is a further expansion on the currently available OpenGrid application-programming interface, which allows Vodacom to partner with other network operators such as MTN to access the service.

“Although it’s called OpenGrid, we are not opening it to the general public because of the legal and privacy agreements that first need to be in place to guarantee our users’ safety,” Maher said at the launch.

The Grid has also been launched in other parts of the continent, with Tanzania going live in April  2008.

Just months after its launch, the Grid SA was recognised during the prestigious Comms MEA awards in Dubai, where Vodacom walked away with the 2008 award for New Telecommunications Service of the Year.

Organised by ITP Technology Publishing, a media company that focuses on Middle East Technology news, the Comms MEA Awards brought together more than 250 senior executives in the telecommunications industry in Africa and the Middle East.

Awards in 12 categories are given on the night, with the Telecommunications Service of the Year award deemed as the most prestigious.

Each year, a panel of judges drawn from various parts of the telecommunications industry from both regions, are brought together to choose the winners.

The nominees are judged on a number of criteria including industry leadership and investment in technology.

Speaking at the awards last year, managing director of Vodacom South Africa Shameel Joosbub said, “The impact of this innovative technology reaches far beyond traditional social networking borders as anyone with The Grid loaded on their cellphone can find friends in their area on The Grid, locate them on a map, chat to them and share experiences and much more.”

According to Clickatell, when you add text mobile messaging systems to your already existing networking application, it increases the value of the social network, and is a great advertising tool.

The increasing number of mobile users who have access to internet on their handsets makes this possible.

In South Africa, Clickatell is responsible for the highly popular teen chat site Mxit, where a user can send low-rate text messages to several friends during chatting sessions.

The bulk messaging system, which enables a company to reach all of its customers, is fast becoming increasingly popular.

Opera Interactive, another company making use of mobile social networking, says on its website that mobile communications have changed the business landscape around the world.

Another advantage of mobile social networking is the money one can make from it.

According to Mobile Marketing South Africa, a blog that focuses on mobile marketing, a bonus of using the system is the “freemium” a new term meaning that a business is able to provide a basic service for free, while charging users a premium rate, thus making “free money” for the service provider.