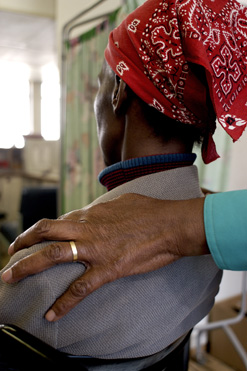 A revolutionary new vaccine aimed at protecting women and girls as young as nine from cervical cancer has been launched in South Africa. The cancer preventing-vaccine Gardasil protects against diseases caused by Human Papillomavirus (HPV) 6, 11, 16 and 18.

The vaccine was launched in early April in South Africa and although it is not yet available for free at public health institutions, it is available at private clinics and hospitals.

Treatment is administered in three doses, at R770 (US$ 97) per injection. Beverley Cowper, the medical director at Merck Sharp & Dohme, the pharmaceutical company manufacturing the vaccine, says: “Clinical trials conducted over the years have showed that the vaccine is 100% effective in preventing vaginal cancer and genital warts.”

The vaccine is launched in South Africa amid worrying statistics. According to health website Health24, in South Africa approximately 6 700 women per year will develop cervical cancer while an estimated 3 700 will die from the disease.

In March 2008, the Medicines Control Council also approved another cancer-preventing vaccine in South Africa. Following approval from the regulatory board, pharmaceutical giant GlaxoSmithKline launched a product called Cervarix. It is available in the private and public sectors.

Cervarix is already in use in the UK and the US, and is recommended for use in girls and women from the age of 10 upwards.

Both Gardasil and Cervarix will work in the same way to protect the cervix against absorbing HPV.

What is cervical cancer?

Cancer of the cervix is associated with the cancer-producing HPV, which is transmitted during intercourse as a sexually transmitted disease. HPV can also be passed on from mother to child during birth, when the infant passes through the cervix.

Just like all other parts of the body, the cervix is made up of different tissues. When cancer-producing agents disturb the genetic coding of the cervix, abnormal cells develop which, after some time, can form a malignant tumour (cancerous growth). If abnormal cells are found only within the epithelium (the outer surface of the cervix), the condition is called a pre-cancerous lesion. Once malignant cells penetrate through the basement membrane into the deeper tissue, the condition is then called cervical cancer as it may be spread to the rest of the body.

A pap smear can usually pick up abnormal tissue cells within the cervix. Bleeding may start and stop between regular menstrual periods, or it may occur after sexual intercourse, douching or during a gynaecological examination.

Menstrual bleeding may last longer and be heavier than usual. Bleeding after menopause may also be an indicator of cervical cancer. This symptom may also point to cancer from the endometrium (inner lining of the womb). Increased vaginal discharge can be another symptom of cervical cancer.

These symptoms may point to cancer or to other health problems. Smoking increases the risk of developing cancer cells in the cervix. The risk is dose-related – if a woman is a heavy smoker, the risk is higher.

Immunity-lowering conditions like AIDS and certain medications for transplant patients may also increase the risk for cervical cancer.

Cervical cancer can be treated through chemotherapy, where different types of drugs are used to treat primary or recurrent cervical cancer. If diagnosis takes place when a woman is already pregnant, a decision must be made if the pregnancy will be carried to full term. Treatment for cervical cancer cannot be administered during pregnancy and if the cancer has advanced, immediate treatment is required.

Other forms of treatment for early stage cancer include cryosurgery, which freezes the pre-invasive cancer cells with a metal probe that has been cooled with liquid nitrogen. Laser surgery is also used to burn off abnormal cells or remove tissue to be studied further. A patient may also decide to have a hysterectomy. The uterus and cervix are removed either through the vagina or the abdominal wall. This results in infertility.