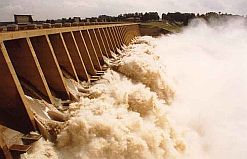 The Vaal Dam is Gauteng’s major source
of  water and the first such South African
resource on social networks.
(Image: Department of Water Affairs) The CSIR is a leading institution in science
and technology research, development
and implementation in Africa.
(Image: Universityof Southern Mississippi)

People throughout the world can now keep up to date with what’s happening at South Africa’s Vaal Dam after accounts were opened in its name on both Facebook and Twitter.

The initiative, driven by the Department of Water Affairs (DWA) and the Council for Scientific and Industrial Research (CSIR), was launched during South Africa’s celebration of Water Week from 21 to 27 March 2011.

A first in South Africa

The Vaal Dam, which is Gauteng’s major source of water, is the first resource in South Africa to join the world of social networking. The aim is to use sites like Facebook and Twitter to create a greater awareness of the dam and the issues facing it.

The initiative between the DWA and the CSIR’s Meraka Institute uses Internet of Things technology to communicate information on the dam.

Internet of Things – also known as Internet of Objects – is a self-configuring wireless network of sensors used to interconnect all things. This concept was formed at the Auto-ID Centre in 1999, which was based at the Massachusetts Institute of Technology.

Laurie Butgereit, a CSIR researcher, said: “The concept is to make water and water related information interesting and accessible so as to raise public awareness about the importance of using this invaluable resource wisely and not wasting it.”

Butgereit uses the Beachcomber platform which takes numeric information on the dam and then transmits them in a language easier for the public to decipher. The information on the levels of the dam is updated every 30 minutes to the social network sites.

Mava Scott, chief director of communication services at the DWA, said: “We are proud of the quality of information on our website and have been very pleased to see how this Vaal Dam Internet of Things project has helped this information reach an even wider audience.”

The Vaal Dam is also a very popular location for citizens to go for leisurely adventures like boating, jet skiing and just having a braai at its banks. A braai is an outdoor barbeque in South Africa.

At the time of publishing, almost 300 people are following @vaal_dam on Twitter.

The dam that feeds most of SA

The dam was constructed in 1938 and lies on the Vaal River, which is one of South Africa’s strongest rivers and flows along the borders of the three provinces; Gauteng, Mpumalanga and the Free State.

It is a key component of the water supply infrastructure for Gauteng and the surrounding provinces.

With South Africa experiencing one of its wettest rainy months during January 2011, 17 sluice gates of the dam were opened to ease overflowing as the dam was 110% full.

The largest ever recorded flood at the dam was in February 1996, when the storage in the reservoir peaked at 118.5% of full supply capacity.

The key to scientific research


The CSIR is a leading institution in science and technology research, development and implementation in Africa.

It was established in 1945 and is situated in Pretoria, about an hour from Johannesburg, to research and develop ways that will make societal living better for the inhabitants of South Africa.

The council receives 40% of its income from an annual government grant and the other 60% comes from research contracts with government, the private sector and research funding agencies from abroad and local.