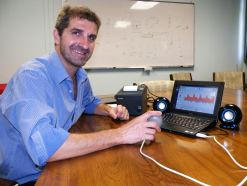 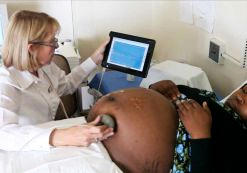 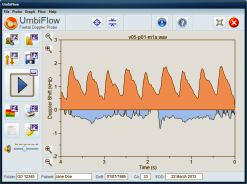 The entire device is powered off a notebook laptop or a windows tablet. Results are generated in real time, displayed on a screen and printed immediately using a small printer connected to the notebook. 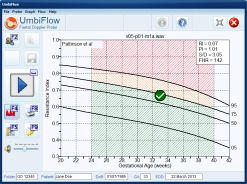 The graph is divided into three sections – green, yellow and red – with each colour determining the type of action required. Green indicates good blood flow with no cause for concern, but foetuses that fall within the red zone will be referred to secondary health care providers.
(Images: Jeremy Wallis)

Researchers from the Council for Scientific and Industrial Research (CSIR) and the Medical Research Council have developed a low-cost Doppler ultrasound device, known as Umbiflow, which will improve primary health care services for pregnant women.

Doppler ultrasound equipment is an important tool used worldwide to determine foetal health and the intention with Umbiflow is to increase its impact.

Using sound waves, it measures blood flow in the umbilical cord to determine if a foetus is small for gestational age (SGA) and sick, which usually occurs if the placenta is not providing enough blood flow to maintain the foetus on the standard growth curve.

In the public healthcare system, women usually only undergo blood flow measurement using ultrasound technology if a pregnancy is considered high risk, and then only through a referral to a secondary health care provider or specialist.

Now a group of researchers have taken conventional, and expensive, ultrasound technology and customised it in such a way that more pregnant women in South Africa can benefit from it.

Conventional ultrasound units are out of reach for the majority of primary care facilities in the country as they can only be operated by specialists, and have historically cost anything between R200 000 (US$22 500) and R1.5-million ($169 000).

The new low-cost device is an ideal solution for ensuring that highly specialised technology is made available to every South African woman.

Currently primary health care practitioners make use of tape measures to determine fundal height, measured from the mother’s pubic bone to the top of the uterus, to see if a foetus is SGA.

Wallis says this technique can correctly identify SGA foetuses – typically 10 in every 100 cases – but the method can’t differentiate if a foetus is SGA yet healthy, or SGA and sick.

“Umbiflow can do this,” he says.

The technological intervention can also help the Department of Health meet its priorities to decrease child mortality (South Africa is 164th out of 220 countries); and improve the efficiency and effectiveness of the healthcare system.

An article in ScienceScope, a publication of the CSIR, suggests that the mortality rate of sick-SGA foetuses can be reduced by about 38%, compared to a health care system that does not have access to Doppler ultrasound.

The benefits of Umbiflow can also help to meet Millennium Development Goals, in particular to reduce the mortality rate of children under five by two thirds by 2015 and achieve universal access to reproductive healthcare.

How will it improve the current health care offering?

Wallis says Umbiflow will improve the quality and efficiency of ante-natal care by lowering the costs associated with Doppler measurements, and reducing the need to refer patients.

By ensuring that every clinic has an Umbiflow device, patient loads at secondary level will be reduced.

“With a typical provincial hospital doing several thousand such Doppler measurements per year, there is room for significantly reducing this figure for those cases linked specifically to the SGA condition,” he explains.

He says a large number of pregnant women referred to secondary care for a Doppler ultrasound measurements are actually referred back to primary level for continued antenatal care, as many patients are found to have healthy-SGA foetuses.

Umbiflow aims to reduce this number of referrals.

“It could save the public healthcare system a lot of money, and increase the comfort of patients,” he says.

If such equipment is available at clinics, it will reduce the inconvenience of referrals such as booking days off work, arranging costly transport and waiting in queues.

Wallis says the benefits of Doppler measurements are well documented. According to the American Journal of Obstetrics and Gynaecology, there is a 44% reduction in hospital admissions, 20% less induced labour and the number of caesarean sections for foetal distress declines by 52%.

The device has been tested widely on thousands of patients, and the results show Umbiflow is as accurate as conventional, more expensive Doppler ultrasound equipment.

But unlike conventional equipment, the Umbiflow doesn’t require a specialist to operate it and interpret the results. The device can easily be used by nursing sisters, midwives and general practitioners in mobile, rural and low-resource primary health care settings.

“The technology is accessible and this is what makes it great,” Wallis says, and operators require very little training compared to, for instance, an imaging ultrasound.

The handheld transducer plugs into a USB port, and the entire device is powered off a notebook laptop or a windows tablet. Results are generated in real time, displayed on a screen and printed immediately using a small printer connected to the notebook.

The graph displaying the results is divided into three sections – green, yellow and red – with each colour determining the type of action required. Green indicates good blood flow with no cause for concern, but foetuses that fall within the red zone will be referred to secondary health care providers.

The Umbiflow logs all results using cloud computing principles and 3G Internet connectivity. Wallis explains that this is important as it allows the developers to pick up any problems with the machine, such as quality or operator error.

Wallis says there is a market for Umbiflow beyond the public healthcare system in South Africa, such as mobile midwives who travel to patients.

“In Holland a third of all births are at home and that country has a huge contingent of mobile midwives, so there is a market for it in first world countries too,” he says.

In South Africa and worldwide the device can also be used by general practitioners who are based in small towns.

The development team hopes to commercialise the technology in the next two years.