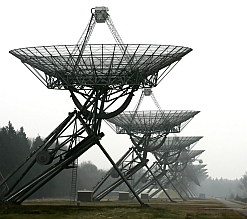 South Africa and Uganda have signed
a bilateral agreement to advance science
and technology on the continent.
(Image: stock.xchng)

South Africa and Uganda have signed a bilateral agreement which will allow the two countries to work together for greater scientific and technological development. South Africa’s minister of science and technology Mosibudi Mangena hosted his Ugandan colleague Ephraim Kamuntu in April 2009 for the occasion.

The Ugandan delegation spent four days in South Africa. The highlight of their visit was the signing of the bilateral agreement, which has taken three years to come to fruition since an initial exploratory visit by Uganda in 2006.

While in the country the delegation visited a number of leading scientific research institutions, among them the Council for Scientific and Industrial Research, the Innovation Hub, the Agricultural Research Council, the Tshwane University of Technology, and the National Research Foundation.

These institutions all fall under the South African National System of Innovation, which is a network of interacting public and private organisations that work together to nurture and develop science and technology.

Speaking at the signing ceremony, Mangena praised Uganda for the country’s enthusiastic pursuit of its national science agenda.

Moving on to South Africa’s progress in the field of science, the minister named a few key government strategies that have already been implemented, such as the 1996 White Paper on Science and Technology and the current Ten Year Innovation Plan, which is in force until 2018. He added that he is convinced that the department of science and technology is on the right course with regard to policy-making and development in the sector.

The newly signed agreement adds to other initiatives already in place to position science and technology as a driving force behind growth and development across the continent.

The identification of key areas of focus and the consolidation of resources will play an important role in the agreement, said Mangena. The next step is to draft a plan of action, which has been scheduled for July.

Kamuntu commented that science and technology will help modernise his country’s subsistence economy, adding that there was a need to discover better energy sources and find lasting solutions to diseases like Aids and malaria.

To this end, bilateral scientific and technological seminars and workshops would be conducted by the two countries to identify problems and carry out joint research.

“The agreement intensifies the existing collaboration between Ugandan and South African scientists and technologists,” said Kamuntu. “It creates new opportunities for cooperation in ICT and health.”

Both countries will now be looking forward to embarking on joint ventures in mutually advantageous areas such as biosciences, especially with regard to food production and health; indigenous knowledge systems; information and communication technology; energy and environmental research; and space science.

Besides the key areas of interest, South Africa and Uganda will also jointly discuss the formulation of effective policies for science and technology, and will not discount the possibility of forming trilateral partnerships on the continent and abroad.

Another issue of high importance is the continuing campaign in both countries to broaden public awareness and understanding of science and technology, as well as the related matter of more effective human capital development programmes to boost available skills.

Mangena described a number of existing programmes where South Africa and Uganda have already worked together closely. One of them is the Network for the Co-ordination and Advancement of sub-Saharan Africa-EU Science and Technology Co-operation, a four-year European Union-funded project to promote regional collaboration, integration and capacity building.

Another is the Regional Impact of Information Society Technologies in Africa initiative, which aims to bridge the digital divide across the continent through training, skills transfer and community building.

Since 2005 the programme has seen the graduation of over 1 000 government officials and researchers in South Africa, Botswana, Mozambique and Tanzania in the areas of eGovernment, eHealth, and eLearning. The organisation has also hosted three conferences in South Africa, Namibia and Mozambique, and the next annual conference takes place in Uganda during May 2009.

South Africa and Uganda are also involved in the Group on Earth Observation, which is a global initiative to build what is known as Geoss, or the Global Earth Observation System of Systems.

This initiative, once in place, is expected to have many beneficial consequences, such as the reduction of loss of life from natural and human-induced disasters; better management of water and energy resources; and improved protection and management of marine, terrestrial and coastal ecosystems.

South Africa and Uganda currently represent the African continent on the 12-member executive committee of the Group of Earth Observation, which also includes three countries each from the Americas, Asia and Europe, and one from the Commonwealth of Independent States.