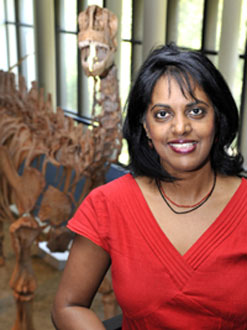 The renowned palaeobiologist is regularly published in science journals, has written two academic books and is also a children’s book author.
(Image: UCT Faculty of Science)

Chinusamy-Turan was one of five researchers who won the TWAS award: she shared honours with scientists from Argentina, Bangladesh, the Philippines, and Egypt at a ceremony at the African Academy of Science (AAS) international scientist gathering in Nairobi in November. The AAS hosts the TWAS regional office for sub-Saharan Africa.

Speaking at the event, AAS executive director Professor Berhanu Abegaz said the award was “proof that the region could produce world-class scientists in all fields of science and served as an inspiration to young African scientists”.

In an interview with mediaclubsouthafrica.com, Chinusamy-Turan said she opted to study science as she’d always had an interest in maths and science at school. She says: “I went to university and registered in the faculty of science because I wanted to be a science teacher.  In fact, after my honours degree in science, I actually did do a postgraduate diploma in teaching, but I think by then I also found that I really enjoyed science. So instead of going to teach at a school, I ended up registering for a master’s in science. The rest, as they say, is history!”

Women in science and engineering

According to its website, the “Association of South African Women in Science and Engineering is a dynamic association for all those who support the idea of strengthening the role of women in science and engineering in South Africa”.

The organisation aims to:

·         Raise the profile of women scientists and engineers;

·         Highlight and address problems faced specifically by women in these fields;

·         Lobby for the advancement of women in science and engineering;  and

·         Provide leadership and role models for young people wishing to enter the fields of science and engineering.

She believes South Africa can produce more scientists if their research was made more accessible to the public and the scientific work being done was given more media coverage.

“I honestly believe that scientists need more visibility among the public. I feel that learners often don’t think of science as a career because they don’t really know what scientists do. I therefore think that it is very important for scientists to communicate their research to the wider public and for the electronic and print media to showcase the good science that is being done in our country (and the world).”

The palaeobiologist is regularly published in science journals, has written two academic books and is also a children’s book author. Her non-fiction book, Famous Dinosaurs of Africa, is about dinosaurs that roamed the continent millions of years ago. She also regularly gives talks to raise awareness on science.

On who inspires her, Chinusamy-Turan says:” My parents. They always motivated me to do what I wanted to and to follow my dreams – even if it meant doing something like palaeontology – which they didn’t have a clue about!”  She says she admires scientists such as Marie Curie (groundbreaking radioactivity researcher), and famous South African palaeoanthropologist,Phillip Tobias. She adds: “After my PhD I worked with palaeontologist, Peter Dodson, at the University of Pennsylvania, and I loved his passion and drive for science and research.  Soon after my PhD, I was also most fortunate to meet Zofia Kielan-Jaworowska, a polish palaeontologist who made a huge impression on me.”

Chinusamy-Turan has undergraduate and postgraduate degrees from the University of the Witwatersrand, a higher diploma in education from the University of Kwa-Zulu Natal (then Durban Westville), and has completed two years in post doctorate studies at the University of Pennsylvania in Philadelphia, in the United States. In 2012 she shared her research on the “extraction of biological information from fossil bones” at the TWAS General Meeting in Tianjin, China.

The University of Cape Town has been placed third overall in a Times Higher Education ranking of universities in BRICS countries and other emerging economies cementing its position as a leading research institution on the African continent and among BRICS nations. 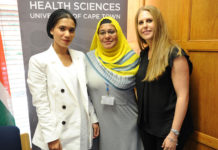