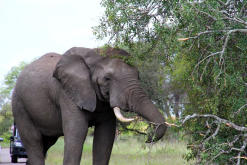 Elephant lovers can get closer to their favourite jumbos through the new Amarula Facebook elephant tracking app.
(Image: Luke Harwood) 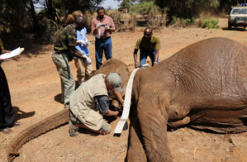 Elephants are not hurt during the fitting procedure, and they rejoin their herds shortly after being woken up.
(Image: Save the Elephants) 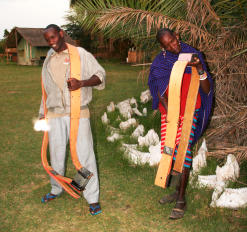 These jumbo-sized GPS collars weigh about 10 kg each – they were fitted to elephants in Kenya’s Amboseli National Park.
(Image: Amboseli Elephant Trust)

Conservation-minded folk can participate in the Amarula Elephant Research Programme (AERP) through a new Facebook app that allows them to track their favourite jumbo, learn more about its habits, and share its movements with others, thereby raising awareness of the importance of protecting the magnificent beasts.

The AERP was established in 2002 with the aim of providing research that will boost African elephant (Loxodonta africana) conservation and enhance current management practices. It’s funded by the Amarula Trust to the tune of over R4-million (US$436 000) so far, and is run by the University of KwaZulu-Natal under the guidance of renowned conservation biologist Prof Rob Slotow.

In the 11 years since the AERP came into being it has delivered valuable information regarding the habits of elephants. This data is used by a range of people, from land owners wanting to introduce new elephants to their area, managers of elephant reserves who want to set up effective management plans, and conservation students, to the general public.

App users can adopt any of six females, each wearing a GPS-GSM collar that pinpoints their coordinates using GPS and transmits it via a GSM network. The collars are fitted to the animals under sedation and once they’re safely released, researchers get up-to-date information on their movements at 30-minute intervals. This information is collected on a website and is used to plot their seasonal migration routes, how they react to fences or even how they choose which trees to eat from, all of which is useful information for conservationists.

The six females are all between 20 and 30 years old.

Once activated, the app allows users to name their chosen tusker, follow its movement through the bush via mapping, images and video footage, share information through their own social network connections, compare similarities and differences between their animal and those of their friends, and help to raise awareness around elephant conservation.

For instance, the AERP team discovered that elephants don’t like to linger near fences, which is contrary to what they had expected. Research showed that the animals move faster and forage less when near a boundary. “This means that adverse effects on indigenous vegetation are not marked around fencing but concentrated deeper into the reserves,” said Slotow. “It’s probably because elephants associate fences with risk.”

In addition, elephants take time to get used to the removal of a boundary – up to a year – and to move into the new area. This is especially true of females, said Slotow, probably because their maternal instincts make them more wary of danger.

Amarula is a cream liqueur made from the fermented pulp of marula fruits, a favourite of elephants, says parent company Distell. The elephant is the symbol of the brand.

Elephants pose special challenges for conservation officials, because of their size, their vast eating requirements – one animal can eat up to 450kg of vegetation every day – and their social nature, which means they move around in family herds of females, led by a matriarch. There are about 10 females in a group on average, plus calves. Males tend to form groups with other males.

The matriarch, usually the oldest female in the group, is an asset to the herd as she has the benefit of years of life experience and brings leadership and decision-making skills to the group.

Elephants, both Asian and African, are a priority species for the global World Wide Fund for Nature (WWF), while for the South African chapter the focus is on rhinos for the moment.

However, elephants have also come under fire from poachers in recent years – they are killed mainly for their ivory, despite a global ban in its trade by the Convention on International Trade in Endangered Species, but also for their meat and hides. According to WWF, this happens especially in countries where conservation authorities are under-funded and unable to maintain proper standards of vigilance.

Habitat destruction is another real threat to the survival of the great animals, and the spread of human populations sometimes cuts off their ancient migration routes. This means that when the animals travel along that route, they encounter the human settlement, which can lead to death for both man and beast.

Elephants are also drawn to agricultural crops, which they find tasty. Small-scale farmers, said WWF, can lose their whole livelihood in one elephant raid, which again causes conflict and ill-feeling. Various humane measures have been tried with general success, including growing chilli peppers around the edges of fields, attaching bee hives to fences, and fitting the animals with collars that are triggered into sending a warning text message when the elephant comes near a farm, giving rangers time to get to the scene and chase it away.

Over the last century, according to WWF, the total population of African elephants has shrunk from between three- and five-million to somewhere between 470 000 and 690 000. The animal is listed as vulnerable on the Red List of the International Union for the Conservation of Nature, which has its own African elephant specialist group.

Research helps us to better understand how and when elephants eat and sleep, how they interact with individuals from their own herd and other herds, how they respond to climate change and the intrusion of tourists into their living space, and more. All of this research yields expert knowledge which becomes the foundation of conservation strategies.