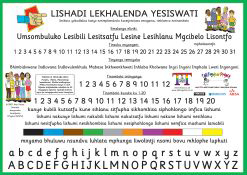 A siSwati calendar chart teaching the basics
of the language.
(Images: Thrass UK)

Children in the United Kingdom are learning isiZulu, seSotho and all the other official South African languages as part of the global Teaching Handwriting Reading and Spelling Skills (Thrass) phonics scheme.

The scheme has been significant in teaching the correct phonetic pronunciation of English words in the UK and other countries. A child viewing it on a computer learns the proper phoneme used in hundreds of English words. “… It is an excellent resource for teachers, assistants and parents for learning about and also teaching the fundamental building blocks of English in an entertaining and fun way,” Thrass UK media director Mike Meade said in a statement.

Thrass Phoneme Machine Version 6.1 now includes the “interactive” Thrass Calendar Charts scheme, which teaches the basics of South African languages. The charts, which could be downloaded as part of the Phoneme software, make it “very easy” for children of any age to learn the local words for days, dates, months, numbers, colours and the names of the letters.

The charts also articulate the click-sound pronunciations of the isiXhosa and isiZulu languages, using children’s voices. Thrass UK encourages parents and teachers to learn from the scheme as well.

“The Calendar Charts are fun and easy to use and the children’s voices, bright colours and fun pictures will get everyone’s attention straight away,” said Meade. “They are an excellent introduction to the sounds of the various languages as children only need click on the word, letter or the number on the chart to hear other children’s voices pronounce it.”

It can be downloaded over the internet from any of the countries where Thrass is permitted to distribute, which covers most of the world. The licensed territory includes Africa, South Africa, Europe and some parts of Asia.

Three African languages, Yoruba, spoken by about 25 million people in West Africa, Shona of Zimbabwe and KiSwahili of East Africa, are also included in the Calendar Charts scheme.

Universities and schools for senior pupils in the UK are also urged to download the software.

The charts are ideal for the language days that UK schools organise to educate children in foreign languages and to promote inter-culturalism, said Thrass UK. They also provide an opportunity to teach the country’s children about the geography, history and culture of South Africa.

Learning from the scheme will come in handy if one plans to visit South Africa for the 2010 Fifa World Cup and it will help them “get right into the spirit of the event”, Meade noted. “These are the languages spoken in the regions where the World Cup matches will be played.

“Anyone following a course will be able to learn not only the key vocabulary for everyday situations but also some basic South African etiquette.”

Thrass UK encourages people to follow the free on-line South African language courses offered by the University of South Africa (Unisa) once they have a grasp of the languages from the Calendar Charts. Unisa, a hub of distance education in South Africa and Africa, teaches basic and widely used phrases of sePedi, isiZulu, isiXhosa, seTswana and seSotho over its African languages website.

“Unisa, which is Africa’s largest education provider, believes that there is no better way to break down interpersonal barriers than through communication that is understood by the listener,” Meade said.

Thrass, which was pioneered by British educational psychologist Alan Davies, is already playing a significant role in South Africa.

It introduced the Absa TalkTogether Project in 2007. The initiative, sponsored by Absa bank, is aimed at improving literacy in South Africa by partnering universities with primary schools and other organisations.

Under the project, six tertiary education institutions partnered with primary schools in the drive to ensure children are able to write, read and speak English well. The University of the Witwatersrand is working with Roseneath Primary School in Parktown, Johannesburg , and the Cape Peninsula University of Technology is offering literacy lessons to pupils at Sunlands Primary School in Cape Town, among the partnerships.

Thrass UK said the phonics scheme is used in thousands of schools and colleges in many countries and is “widely acknowledged as having the potential to more than double the rate of progress for reading and spelling in English”.