A doctor examining chest X-rays at a
TB clinic in Cape Town. (Image: US
Department of State official blog) 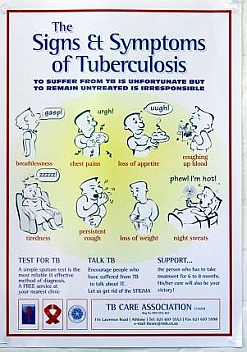 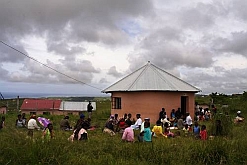 A rural health clinic, where patients are
treated for, among others, TB. (Image:
Damien Schumann, World Lung Foundation)

South Africa is the setting for a phase II clinical trial of an advanced new tuberculosis vaccine. The trial is to be conducted by the non-profit Aeras Global TB Vaccine Foundation, which is supported by the Bill and Melinda Gates Foundation. Its local partner is the South African Tuberculosis Vaccine Initiative (Satvi), based at Cape Town University. Satvi is the largest dedicated TB vaccine research group in Africa.

Currently there is only one TB vaccine available worldwide – the Bacille Calmette-Guérin or BCG vaccine, developed back in 1921. This is the drug administered to infants at birth. With TB evolving in recent years into drug-resistant and extensively drug-resistant strains, the almost century-old BCG is no longer as effective as it once was.

According to Aeras, the BCG vaccine provides protection against severe forms of infant TB but cannot be relied upon for the adult form of the disease. Since TB is most prevalent in adults it is imperative that a vaccine be developed that is effective in combating all strains of TB, including drug-resistant versions. BCG is the most widely-administered vaccine in the world, says Aeras, but still the TB burden is increasing.

According to Tony Hawkridge of Satvi, BCG is also dangerous for those suffering from Aids, and may also be unsafe for HIV-positive patients. This is because BCG is a live vaccine that may further compromise an already-weakened immune system.

However, the new vaccine works alongside BCG and is intended to enhance the body’s immune response, which will have already been activated by the administration of BCG. It does this by using a protein from the pathogen, the Mycobacterium tuberculosis bacterium, to boost production of T-cells, a type of white blood cell that defends the body against infection.

Aeras is also working with the Oxford-Emergent Tuberculosis Consortium in development of the new vaccine. This is a collaborative effort between researchers at Oxford University and US-based Emergent BioSolutions, a pharmaceutical company that specialises in the development of vaccines against killer diseases such as anthrax, botulism, tuberculosis, typhoid, and hepatitis B.

The new vaccine, known as MVA85A/AERAS-485, was developed by Wellcome Trust senior research fellow Dr Helen McShane and her team at Oxford’s Jenner Institute. McShane commented that this is the first experimental TB vaccine to advance to phase II of a clinical trial in more than 80 years.

“It’s the first of new-generation TB vaccines to go into this kind of study looking at efficacy in infants,” she said. “It’s enormously exciting, and I sincerely hope we will see some efficacy.”

The cost of the study is estimated at US$14-million (R124-million) and will be carried by Aeras and the Wellcome Trust, a UK-based charity that funds biomedical research around the world. Previous trial phases have already been carried out South Africa and the Gambia, with promising results.

The trial, which involves some 2 750 South African children, will be based at the Brewelskloof TB Hospital in Worcester, Western Cape. Researchers are currently in the process of selecting the participating infants. All children will already have received BCG at birth, as is the standard practice, and at 18 weeks half of them will get MVA85A while the other half will be given a placebo.

According to McShane, the team is hoping for at least a 60% reduction in the incidence of pulmonary TB among children who receive the vaccine, compared with children who get the placebo. She added that initial results may be available as early as 2011 or 2012.

“There is still a long road ahead,” remarked Aeras CEO Jerald Sadoff, “but this marks an important milestone toward the goal of a more effective TB vaccine.”

“We believe this is the most exciting advance in the field of TB vaccines for over 80 years,” said McShane. “We have shown that this vaccine is safe and stimulates strong immune responses. This trial will hopefully show that the vaccine can protect people from getting TB and enable the global community to begin to control this devastating disease.”

The World Health Organisation (WHO) reports that about one third of the planet’s entire population is infected with TB. Despite the fact that TB is treatable and curable, of these roughly 2-billion people about 1.8-million succumb to the disease every year. A large number of them are children.

TB is also a major killer of people with HIV and Aids, according to the WHO. There are about 33-million people living with HIV, of whom about a third are also infected with TB. Because their immune systems are weakened by the primary infection, around 90% of these people die within two to three months of contracting TB – unless they are treated.

The incidence of TB is widespread in South Africa, and each year another 250 000 new cases are recorded in the country. According to Satvi, South Africa carries the seventh highest TB burden of all countries. Approximately 80 people die of the disease in South Africa every day, a figure that has been accelerated by the concurrent HIV epidemic.

With 25% of all cases but only 10% of the population, the Western Cape is the hardest-hit by TB, which is one of the reasons the trial is taking place in that province.

Between 15% and 20% of TB cases in South Africa are children. These young patients have contracted TB only recently, which demonstrates that current TB control measures are not doing what they should.

No medicine can be released for public consumption without undergoing extensive clinical trials, which are conducted on human subjects over a period of time. A clinical trial can only be started once sufficient preliminary information has been collected on the non-clinical properties of the medication or device, and permission has been obtained from the health authority in the country where it is to take place.

There are several phases to a clinical trial, which can take years to complete. 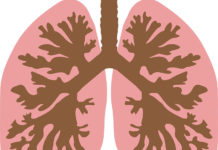 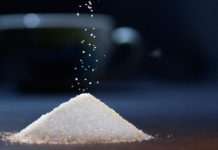 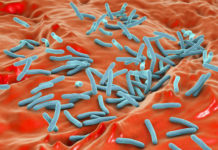