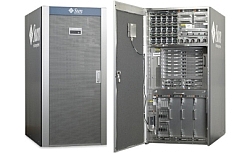 South Africa’s new supercomputer is under construction – Sun Microsystems announced in mid-March 2009 that it has initiated the rollout of the 27-teraflop machine, which will run on open source software.

The machine, which comprises the second phase of a multi-million rand project awarded to Sun in 2008, will be South Africa’s largest. It is based at the Centre for High Performance Computing (CHPC) at the Council for Scientific and Industrial Research’s (CSIR) Cape Town campus.

Managed by the CSIR’s Meraka Institute, the CHPC was established to find ways of enabling South Africa to become globally competitive and to accelerate Africa’s socio-economic upliftment through the effective application of high-end cyber-infrastructure.

“Phase two forms part of fulfilling the government’s goal to position South Africa as a beacon of research on the continent,” says systems architect Stefan Jacobs of Sun, “and meeting CHPC’s mission to enable South Africa to become globally competitive through the effective use of high-end IS infrastructure.”

The national Department of Science and Technology supports the CHPC as one of the three primary pillars of its cyber-infrastructure initiative – the other two are the South African National Research Network and the Very Large Databases project.

All work together to enable the South African research an scientific community to collaborate with their peers globally on important science projects such as the Square Kilometre Array astronomy initiative, and in other fields including biomedical science, energy alternatives, climate change, bioinformatics, and advanced manufacturing, amongst others.

“For instance, research conducted into lithium crystals at the University of Limpopo,” says Jacobs, “aims to improve battery technology to deliver cost effective and long-term power solutions. The research relies on computational modeling methods that benefit greatly from the incredible processing power available at the CHPC.”

A teraflop is one trillion floating point operations per second and is a description of the computing power of a machine. It measures how many multiplications can be performed within one second. IBM’s BlueGene/L supercomputer has a peak speed of 596 teraflops, while the human brain is said to be capable of handling 100 teraflops.

Other local partners include IT solutions provider Eclipse Networks and IT infrastructure specialists Breakpoint Solutions.

Other challenges such as the development of vaccines and other new technologies to address the African situation, will benefit from the CHPC, says Jacobs, as its processing power will enable researchers to replace months of computing with weeks, days or even hours.

According to Sun, the supercomputer will run on a combination of the Solaris 10, Suse 10 and Red Hat 5.1 operating systems, all of which are open source. Jacobs says that installed applications will form a diverse collection of open source software, some purchased from independent software vendors and some developed by researchers working on the project.

At the heart of the system is a high-end Sun SPARC Enterprise M9000 server with no less than 64 SPARC64 VII quad-core processors, and a cluster of four Sun Blade 6048 modular systems.

Sun will load its Visualization system onto the supercomputer – this advanced package supports multi-display and remote collaboration and integrates workstations, servers, networking, interconnects, graphics and software, allowing users to assemble and view 3D models of their data.

The Open Storage data storage platform is based on 10 AMD Opteron-powered Sun Fire X4540 storage servers, which together provide 480 terabytes of data storage. These will run Sun’s Lustre file system, which was specially developed for large-scale cluster computing. According to Sun, Lustre is managing data on more than half of the world’s top 50 supercomputers and seven of the top 10 supercomputers.

Hardware is being assembled and tested at Sun’s factory in Scotland and when ready, will be shipped to South Africa for installation by Eclipse and Breakpoint.