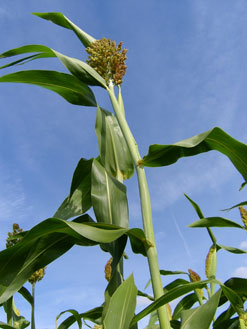 If other food such as vegetables are not
available to supplement the diet, a staple
food such as sorghum, fortified with
improved nutritional value, can reduce the
incidence of malnutrition.
(Image: Wikipedia)

For millions of people in sub-Saharan Africa sorghum is a staple food. It is popular because it is one of the few crops that grow well in arid regions, but it lacks essential nutrients and has poor protein digestibility.

Now South Africa’s Council for Scientific and Industrial Research (CSIR) has been given the go-ahead by the government to begin greenhouse trials on a new strain of sorghum that has been genetically modified to be enriched with essential nutrients – a process known as biofortification.  The trials will be of great value to many people in African countries who cultivate the crop.

Scientific evidence from the CSIR proves that deficiencies in essential micronutrients such as iron, zinc, vitamin A and others, can cause impaired immune systems, blindness, low birth weight, impaired neuropsychological development and growth stunting.

Dr Menere Shargie, a sorghum breeder at the Agricultural Research Council Grain Crops Institute, said the bio-fortification of sorghum is essential, particularly for the poor.

“If you don’t have other food such as vegetables to supplement your diet, a fortified staple with improved nutritional value can reduce the incidence of malnutrition,” Shargie said.

Mazithulela said it affirms that various branches of government are united in their policy to develop biotechnology as a key driver for economic growth, job creation and to sustain South Africa’s leadership in science and technology on the continent.

The research council is one of the scientific contributors in the international research initiative to nutritionally enhance grain sorghum for use in Africa. It brings together seven African and two US organisations. The South African partners include the CSIR, the Agricultural Research Council and the University of Pretoria.

The project is funded by a grant from the Grand Challenges in Global Health Initiative, with a budget of US$18.6-million over a period of five years. The Gates Foundation launched the initiative in 2003, to help apply innovation in science and technology to one of the greatest health problems in the developing world.

Council for Scientific and Industrial Research