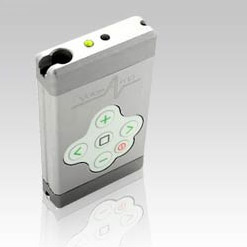 A socially debilitating condition, stuttering occurs when the normal flow of speech is disrupted with pauses, frequent repetitions or a prolongation of the first syllable of words. Speaking before a group of people or talking on the telephone tends to make it more severe.

More than 1% of the South African population are stutterers, while 5% stutter at some time and recover spontaneously during childhood.

“It is not known what causes stuttering, but what we do know is that it is a complex interplay of a combination of factors like genetics, family dynamics and child development,” says Dina Lilian, speech therapist at the Donald Gordon Medical Centre in Johannesburg.

There is no cure for stuttering. But for 70 years it has been known that situations where a phenomenon called choral accompaniment occurs – such as singing, reciting poetry or speaking alone – often improve fluency.

Knowing that hearing one’s own voice can also cause a person to speak effortlessly, Falck, the managing director of VoiceAmp, invented the device in collaboration with research teams at the University of the Witwatersrand and other South African universities. It is now being successfully marketed across the world.

Falck is no stranger to inventions; he has been known to be creative with his hands from the age of eight, when he started making solar panels. His interest in speech aids began when his grandfather lost his ability to speak clearly; Falck invented a device that amplified his grandfather’s vocal chords.

The VoiceAmp 601 is based on an electronic reproduction of choral accompaniment, where the device receives the user’s voice signal via a microphone. This signal is then processed by the device and altered to produce a choral voice. The choral voice is then played back to the user via an earpiece, which unlocks the stuttering effect and allows the user to speak with little or no interruption.

Settings for three different background noise levels can be programmed to simulate noisy to quiet backgrounds at the flick of a switch.

“This device helps mainly those with a severe stutter and is best used in conjunction with speech therapy,” says Lilian. “For those who have benefited it really does make a remarkable difference to their lives.”