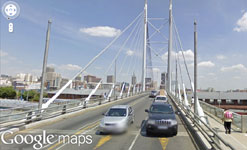 The Nelson Mandela Bridge, with the
license plates of cars blurred. 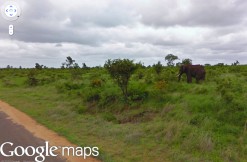 An elephant in the Kruger National Park. 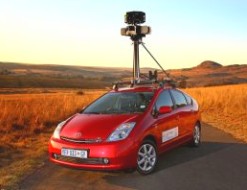 The Toyota Prius with special Street
View camera on the roof.
(Images: Google)

Google Street View has finally gone live in South Africa – several weeks after its initial scheduled launch date, but still in time for the kick-off of the 2010 Fifa World Cup on 11 June. The country is the first on the continent to offer the Street View service.

The search giant announced in September 2009 that South Africa would be its next destination for Street View, which is a component of Google Maps, appearing as the lowest zoom level.

The technology offers a 360-degree horizontal and a 290-degree vertical panoramic view of the selected regions.

“People will get a preview of what [the country] looks like in a real environment,” he said.

Using trikes, similar to the old-fashioned ice-cream carts, and Toyota Prius cars fitted with rooftop cameras that take photos in all directions simultaneously, the Street View team travelled some 64 000km to collect images in Johannesburg, Pretoria, Cape Town, Port Elizabeth and Durban and 22 other towns around the country. The Prius was selected because of its environment-friendly characteristics and economical use of fuel.

South Africa follows on the heels of the US, Japan, Taiwan, Australia, New Zealand, and some European and Scandinavian countries whose scenery is now available at street level and in 3D.

In Google Maps, the user will know when Street View images are available when the Pegman icon, found on top of the zoom bar at left, turns yellow.

Pegman is the Google Maps Street View guide and is used to enter Street View simply by dragging it to a street. The mascot is also seen in a life-size version that appears in Google’s instruction videos.

Users will not only be able to see street-level images captured in South Africa’s main cities, but a number of popular tourist attractions as well.

These include the Wanderers cricket stadium and Nelson Mandela Bridge in Johannesburg; Chapman’s Peak Drive on the Cape peninsula; the Motlatse (formerly the Blyde River) Canyon in Mpumalanga province; big names from the Cape winelands such as Klein Constantia, Meerlust and Morgenster; and the world-renowned Kruger National Park.

Football fans are in for a treat, as all 10 World Cup stadiums have been modelled in 3D, allowing fans to explore them from pitch level right to the top floors.

Some sources speculate that the delay was caused by concerns over privacy, but Google’s stance is that technical issues were the reason for the late roll-out.

Although the image-capturing and processing technology automatically blurs faces and number plates, and only displays scenes of public property that are visible to anyone from the street, there were said to be invisible violations in the form of personal data collected from open wireless networks by the Google vehicles as they drove around. This has happened in other countries as well, and the issue is still under investigation.

Although there have been instances where Street Maps has featured private roads, this was only done after getting permission.

According to Google South Africa’s communications manager Julie Taylor, South Africans have reason to be excited about the new development. “They can now explore the country in new ways, whether a local neighbourhood or a coastal route they’ve never travelled along.”

Taylor added that the local tourism industry will receive a huge boost as people are now able to view actual street scenes and famous attractions, especially with the World Cup just hours away from kick-off.

Tourists will also be able to plan their trips more efficiently by familiarising themselves with their surroundings before they even set foot on South African soil. Once in the country, they will be able to navigate on their own, around the Street View cities, with ease.

The Kruger National Park’s William Mabasa said: “Kruger is an iconic South African destination, and the launch of Street View in South Africa means that we can bring Kruger’s spectacular wildlife to even more people around the globe. In fact, our elephants are the first elephants ever on Street View!”

The local real estate market, too, is said to be excited about the facility, as it will add a new dimension to their listings and will make it easier for house-hunters to find that perfect property. Businesses can enhance their websites by embedding the Street View code right into their pages.