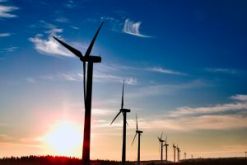 The new wind farm will boast between
18 and 20 turbines. (Image: stock.xchng)

A diagram explaining the workings of a
wind turbine.
(Image: Conservation Law Foundation)

An environmental impact study for South Africa’s third wind farm is due to begin before the end of March. The planned St Helena Bay wind farm on the country’s west coast will run between 18 and 20 wind turbines, producing at least 50 MW of power – or up to 2% of the entire Western Cape province’s 3 500 MW summer requirements.

The first wind farm in South Africa, the R75-million ($8-million) Darling wind farm, powered up in May 2008 with four turbines, each of which generate 1.3 MW each of clean energy. Partners include the Western Cape Department of Environmental Affairs and Development Planning, the Saldanha Municipality on the west coast, the Seeland Development Trust, Oxfam UK and project developer Genesis Eco-Energy.

The 926 hectare piece of land earmarked for the St Helena Bay wind farm is owned by the poor fishing community of Seeland, who acquired it through the government’s Land Redistribution for Agricultural Development programme.

A group of more than 200 emerging farmers from the community have joined to form the Seeland Development Trust, which is now a 25% owner in the wind farm project. All revenue will go towards social and economic development projects to benefit communities in the area.

Blowing in the wind

St Helena Bay is a windy area that is particularly suited to this type of project, as wind speeds of six metres per second and more are the rule rather than the exception.

Energy generated will be fed into the national grid. The National Energy Regulator of South Africa will announce its decision on the implementation of renewable energy feed-in tariffs at the end of March 2009. This is expected to stimulate large-scale investment in renewable energy in South Africa, as the tariff will amply cover the cost of generation and investors can anticipate a reasonable profit too.

The number of turbines has yet to be confirmed, as this will depend on the wind situation in the area as well as issues to be examined in the forthcoming study, such as visual impact. The project is expected to create about 25 permanent jobs.

Genesis Eco-Energy operations director Davin Chown explained that the international financial crisis has caused the cancellation of a number of European renewable wind energy projects, leaving manufacturers with surplus stock. Speedy importation of turbines into South Africa will therefore not be a problem.

With a budget of R850-million ($89-million), the new wind farm at St Helena Bay will be the third large-scale renewable energy plant in the country, after Darling and the proposed Eskom facility at Koekenaap near Vredendal in the Western Cape.

The latter project was confirmed by Eskom, South Africa’s national power supplier, in January 2009, and the first phase will see about 50 turbines producing 100 MW, with phase two introducing a similar number. Construction will begin later in 2009 and the plant is expected to be operational by 2010. Eskom is building the farm in partnership with French development agency Agence Française de Développement.

Because of the consistency and force of its winds, South Africa’s west coast has been identified as a perfect area for generation of electricity through wind. However, experts say that lack of a comprehensive and accurate map of windy areas is hindering development. It is vital to know where the best areas for wind turbines are, in order to plan ahead.

In January 2009 work started on a four-year project to plot wind speeds and frequencies along the 3 000km west coastline. Sponsored in part by the Danish government, the wind atlas will provide detailed information about local wind conditions and thus encourage renewable energy investment in the area.

The study is being conducted jointly by Cape Town University, the Royal Danish National Wind Resource Institute, the South African National Energy Research Institute and the Department of Minerals and Energy. The first draft map is expected by early 2010.

Denmark is the world’s leader in wind power, deriving more than 19% of its power from the breezes that gust across the land.