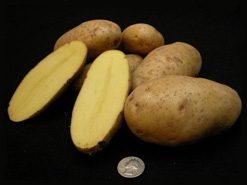 The SpuntaG2 potato, which is currently
undergoing genetic modification in
South Africa to make it pest-resistant.
(Image: Michigan State University) 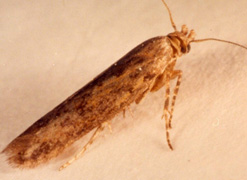 The bane of many a farmer around the
world – the potato tuber moth. (Image:
UN Food and Agriculture Organisation) 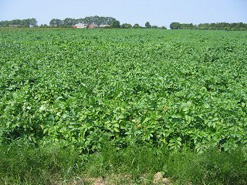 Crops in the field and particularly in
storage are vulnerable to attacks by the
destructive potato tuber moth.
(Image: Wikimedia)

South Africa’s Agricultural Research Council (ARC), in collaboration with Michigan State University in the US, has developed a potato variety that is resistant to one of the industry’s biggest threats, the potato tuber moth (Phthorimaea operculella Zeller).

Known as SpuntaG2, the potato is currently before the Executive Council for Genetically Modified Organisms, which consists of members from six different national departments, including Agriculture; Science and Technology; Environmental Affairs and Tourism; Health; Labour; and Trade and Industry. Under the Genetically Modified Organisms Act of 1997, the committee is expected to take a number of months to decide whether SpuntaG2 can enter the South African market.

Should approval for general release be granted, the ARC will initiate trials with farmers under unconfined conditions, which will in turn lead to certification and labelling ahead of the release of the enhanced potato variety.

SpuntaG2 is Africa’s first locally developed genetically modified (GM) potato. Because the project is publicly funded under the auspices of the Department of Agriculture and the ARC, SpuntaG2 seeds will not be sold at a premium but will be readily accessible to small-scale farmers, who suffer most from pest outbreaks as they cannot afford the necessary chemical measures to control the pests.

If approval is obtained from the authorities and farmers, the ARC plans to transfer the technology to other varieties of potatoes.

Development of the SpuntaG2 began in 2002 under the ARC’s potato breeding programme, which is partially funded by the US Agency for International Development. Scientists introduced the (Bt)-cry1Ia1 gene from the common soil bacterium Bacillus thuringiensis into the potato variety Spunta to produce a potato with a high resistance to the tuber moth.

B. thuringiensis acts by producing proteins that paralyse the digestive system of susceptible insects. These insects stop feeding and eventually die of starvation. Although the organism’s unique insecticidal properties were first discovered in 1911, it was not commercially available until the 1950s. The first company to produce a genetically engineered plant incorporating B. thuringiensis was Belgium-based Plant Genetic Systems, which developed an insect-resistant strain of tobacco in 1985.

Six years of controlled testing in a number of potato growing areas in South Africa have shown that SpuntaG2 controls the potato moth without affecting other organisms and without having to resort to pesticides. According to the ARC, the variety is as safe to grow and eat as other potatoes, a claim that will soon be verified by the Council for Genetically Modified Organisms.

However, a statement and petition released by the African Centre for Biosafety expresses the centre’s and a number of other stakeholders’ opposition to SpuntaG2, and urges the council to reject the ARC’s application for approval.

The centre cites numerous reasons for its stance, among them the claim that the US Agency for International Development has a hidden agenda to promote US corporate interests in Africa; the fact that much of South Africa’s potato crop is exported to other countries in Southern Africa which do not allow the import of genetically modified food; and cites health concerns as there are records of some consumers reacting badly to foods modified with B. thuringiensis genes.

Year of the Potato

The United Nations has declared 2008 as the International Year of the Potato. The plant was first cultivated some 7 000 years ago in the Lake Titicaca region of Peru, in the Andes mountains 3 800m above sea level, where inhabitants began domesticating wild potato plants that grew around the lake.

Besides wheat, maize and rice, the cultivated potato (Solanum tuberosum) is one of the world’s major food crops and a staple for millions of people across the globe. It belongs to the Solanaceae, or nightshade family of flowering plants, and shares the genus Solanum with at least 1 000 other species, including tomato and eggplant.

Farmers in developing countries are particularly hard hit by the potato tuber moth, especially as crops often lie in storage to be eaten at a later stage or for future planting – this makes them more susceptible to tuber moth attacks. The moth can completely devastate a crop in storage or vast areas of crops on the land. Commercial potato growers are not as badly off because they have more sophisticated storage facilities and their potatoes are processed quickly.

Potato tuber moths lay eggs on the plant surface and their larvae burrow into the potatoes, causing immense damage. SpuntaG2 is completely resistant to the destructive pest on the land and under storage conditions. Armed with this extra method of tuber moth control, potato farmers can look forward to reduced costs and a healthier environment, says the ARC.

In Africa, Egypt is the top potato-producing nation, with South Africa sharing second place along with Algeria and Malawi, according to the United Nations’ Food and Agriculture Organisation.