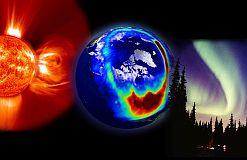 South Africa has opened its own space
weather centre at the Hermanus
Magnetic Observatory.
(Image: Nasa) 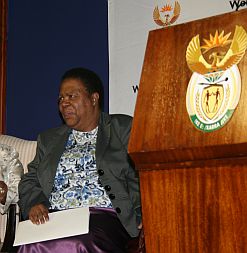 Minister Naledi Pandor said the government
will start a space programme within
the next five years.
(Image: Bongani Nkosi)

South Africa’s space weather centre, one of 13 in the world, has been opened in the Western Cape. There are hopes the facility will improve the country’s position in the global space sector and enable it to achieve its space-related ambitions.

The centre, located at the Hermanus Magnetic Observatory, was opened by Minister of Science and Technology Naledi Pandor on 10 December 2010.

The department said thecentre has been “designed to fulfil international requirements and provide a superior-class facility for space weather forecasts, predictions and warnings”.

“This centre will contribute essential information for global space science and technology, as well as forecasts and predictions to protect our growing and future satellite industry,” said Pandor in her speech.

The regional space weather warning centre for Africa has been running at the Hermanus Magnetic Observatory for years now, and the new centre will help it expand its services. An area within the existing observatory was renovated to the tune of R1.6-million (US$234 000) to create the dedicated space weather centre.

The National Research Foundation (NRF) funded the project, which began in May 2010. “This project will position our country as a leader in space weather for the African continent,” Pandor said.

Real-time space weather data will be generated from the centre’s “state-of-the-art” server room on a 24-hour basis. The centre is staffed with three space weather scientists, including head Kobus Olckers.

Although space weather does not have a direct link to conditions on earth, it can impact on the functionality of orbiting technology, like satellites, global positioning systems like GPS devices and even mobile phones.

According to the Solar and Heliospheric Observatory, space weather is caused by conditions on the sun and by solar winds, which can influence the performance and reliability of space-borne and ground-based technological systems. Space weather can endanger human life or health, according to the observatory.

“This centre will play a crucial role in the monitoring of conditions over Africa as we approach the next solar maximum,” said the NRF in a statement.

During a solar maximum period, the sun’s magnetic field on the solar equator rotates at a slightly faster pace than at the solar poles, resulting in a type of intense storm.

The last solar maximum was in 2000 and Nasa scientists predict the next one will happen in 2012.

This upcoming burst of solar activity, anticipated to be the greatest since 1958, will most definitely affect mobile phones, GPSs and many other modern technologies on earth, according to Nasa. It will also result in Northern Lights shining at their brightest in 50 years – and they may even be visible from as far south as Rome, Italy.

Thanks to the new centre, the Hermanus Magnetic Observatory will, for the first time, be able to continuously monitor space weather data coming from its various stations.

The space weather centre was opened a day after the official launch of South African National Space Agency and the National Space Strategy, which is expected to boost the country’s involvement in space activities. However, it doesn’t look like South Africa will send an astronaut to space any time soon.

“The opening of the space weather centre is an additional landmark in our attempts to strengthen the space sector,” said Pandor.

“We know the strengths of the local space industry. We know that we need to improve our capacity. We want to improve South Africa’s global position in the space sector,” she added.

The government’s goal is to establish a fully operational space programme within the next five years.

The 12 space weather regional warning centres elsewhere in the world are in the US, China, India, Brazil, Canada, Czech Republic, Belgium, Poland, Russia, Australia and Japan.

The 78-year-old observatory has grown significantly over the last decade since the NRF took ownership, with its staff of scientists growing from nine to 40. Its postgraduate programme now has 24 MSc and PhD students.

While it used to concentrate on geomagnetic studies alone, it now focuses on space physics as well.

Its data is used by global and local institutions such as the International Real-time Magnetic Observatory Network, the National Astrophysics and Space Science Programme and Rhodes University in the Eastern Cape.