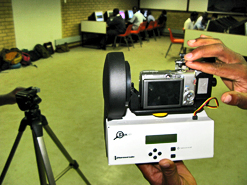 A close up of the Gigapan robotic camera 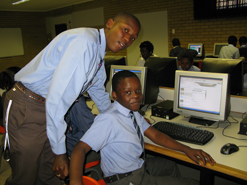 Nqobile Thusi, grade 11 and Sanele
Mthetwa,Grade 10.
Both learners are part of the Gigapan
project. 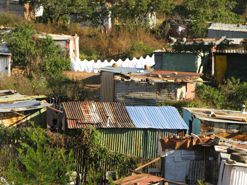 No sooner has the bell signalling the end of yet another school day been rung than the raucous sound of hundreds of students streaming out of Lavela High School in Zola North, Soweto, can already be heard. But for a small group of students another world is just opening up.

The 27 students chosen to take part in an exciting new project are diligently working away on their computers in the newly installed computer lab, where they are learning more about Gigapan.

Gigapan is the name of a high-resolution robotic camera, developed by the National Aeronautics and Space Administration in the US and project is an initiative developed to assist children from different backgrounds to understand each other and their worlds better. It is backed by funding from the UN Educational, Scientific and Cultural Organisation’s International Bureau of Education. Other partners on the project are the Carnegie Mellon University (CMU), Google and National Geographic. The computers in the lab were installed by Gauteng Online, a project of the Gauteng Department of Education.

The Soweto school is one of only four selected for the project, and it will be working with other children in the US and Trinidad and Tobago. It was selected for Gigapan after it worked with Unesco last year to lead discussions about Aids with a school in Australia.

The Gigipan camera has the ability to capture images in great detail. Although at first glance they look like any other picture, they have been created by the software in the system joining together anything from 40 to 400 images. When these images are made available on a website the viewer is able to zoom in as much as 600-million pixels, enabling them to see something as detailed as a logo on a t-shirt or a street sign.

CMU’s Professor of Robotics, Illah Nourbaksh, came to South Africa in April to teach pupils how to use the camera and the robotic arm that guides it, and he took the first pictures of Soweto that were loaded onto the site.

Sanele Mthetwa, a 14-year-old grade 10 pupil, explains with pride how the project works, “We take snapshots, post them on a website and other kids in similar programmes around the world ask us questions about our lives.”

What Mthetwa is referring to is the rare partnership between a few selected high schools around the world that have been given the Gigapan robotic camera. Students log on to a website where they can look at pictures posted by their partner school and if there is something of interest they see, the students are then able to zoom in and take a “snapshot”. There is a conversation box attached to the snapshot, enabling students to satisfy their curiosity with endless questions that they ask each other.

Lavela’s partner school is Falk High School in Pittsburg, Pennsylvania in the US. Every day after school the Soweto pupils rush to the computers to see what their American friends have uploaded.

The Soweto learners have fun taking snapshots and asking their American counterparts about their local community. In turn, they too answer questions about the panoramic pictures of Soweto.

Grade 12 learner Asanda Songca, appointed the student leader of the project, had to gather together a group of interested students who would take part in the training session with Professor Nourbaksh. “The biggest challenge I had was to find students that were interested and committed to this project. It was important that we had a vision for the project. So far we are getting there, everyone is cooperating.”

Recently the students decided to go to the top of the Klipspruit Valley Bridge in Soweto to take pictures. From this point the economic disparity between local residents can clearly be seen. A marsh and the Klipspruit Valley River separate residents living in dire poverty in a squatter camp (informal settlement) on the one side and residents living in big houses and relatively better conditions on the other.

Two grade 11 pupils, Sanele Mpanza and Sibusiso Thusi, along with deputy principal Lulama Thobejane, mount the robotic camera at the top of the bridge. With their teacher’s guidance, the pupils decide that they will take a 180-degree panoramic shot of the Kliptown Chicken Farm squatter camp, and the surrounding Foxlake, Dlamini and Rockville townships.

After some fiddling with the settings and punching in coordinates, the camera takes over and snaps away by itself. The students check the images on the camera, take a few more and then decide that they have taken enough for the day.

For Thobejane, the project is exciting as it opens the eyes of students to a high-tech world that they didn’t know before. She says that through Gigapan her students have now joined a global community, “People from diverse cultures and origins must communicate, with the hope of making the world a better place.”

The pupils have a six-month deadline to have the project up and running, after which they will be assessed on their progress.