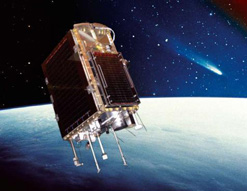 An artist’s impression of the
SumbandilaSAT observation satellite.
(Image: Department of Science and
Technology)

South Africa is set to lead Africa in space technology, thanks to a the government’s broad-reaching investment drive.

The Department of Science and Technology’s significant investments in satellite and telescope projects, such as the SumbandilaSAT observation satellite, is not only likely to boost infrastructure development and the economy, but also swell the ranks of science and engineering graduates.

According to Peter Martinez of the South African Astronomical Observatory, international interest in South African space technology is growing. The country is bidding against Australia to host the massive Square Kilometre Array telescope installation, and in 2011 the International Astronautical Congress will be hosted in South Africa for the first time.

“It shows that the country’s efforts are being noticed and that it’s really becoming a player in this industry,” Martinez said.

South Africa isn’t entirely new to space. In 1999 SunSpace, the country’s only satellite-construction company, partnered with the University of Stellenbosch to produce SunSat, a satellite launched into a low level sun-synchronous orbit from the Van den Bergh Air Force Base in the US.

On 15 September this year SumbandilaSAT, South Africa’s micro earth-observation satellite, is due to be launched at the Baikonur Cosmodrome in Kazakhstan, Russia.

Bart Cilliers, managing director of SunSpace, said the satellite will orbit about 500km to 600km above the earth. Carrying high-resolution cameras, it will produce images to be used agriculture, mapping of infrastructure and land use, population measurement and the monitoring of dam levels, to name but a few applications.

Ron Olivier, executive director of business development at SunSpace, told Reuters in early August that the international market for very high-resolution remote-sensing data is expanding. He estimated the annual global market value for this type of data at R1.2-billion (US$154-million).

The demand for satellite images is also growing in other African countries; SumbandilaSAT will be able to provide these with higher-quality images.

Cilliers said images for planning purposes can currently only be bought from commercial satellites, a costly and time-consuming process. The images are therefore often outdated – images of rural areas in particular can be between three months and a year old.

“With South Africa having its own satellite set up for national priorities, this process could be simplified,” he said.

According to Cilliers, South Africa plans to develop both earth observation satellites – such as SumbandilaSAT – and geostationary satellites.

Geostationary satellites orbit at the same rate as the earth rotates, keeping above the same spot on the equator. This makes them ideal for telecommunications.

If included in South Africa’s space programme, these would improve the country’s telecommunications infrastructure, even allowing it to sell bandwidth to other countries. South Africa currently uses only a single transponder on a commercial satellite for satellite bandwidth.

But Olivier added that with the country’s space programme still in its infancy, the South African government would still have to decide on the number of satellites to be constructed.

“Continued development and significant improvements can only be achieved if two further satellites are launched within the next five years, and at least one satellite for years six to eight,” he said.

Cilliers added that there is also the potential for countries to share satellites. South Africa, Algeria, Nigeria and Kenya already have this kind of collaboration, with a memorandum of understanding signed in June 2008.

The countries have committed their national satellites to the African Resources Management Constellation project, which aims to give advanced warnings of natural and environmental disasters such as floods.

Steaming ahead in astronomy

South Africa is already known for its advanced developments in the field of astronomy. The Southern African Large Telescope near the town of Sutherland in the Karoo is the largest optical telescope in the southern hemisphere.

South Africa is also in the running against Australia to host the Square Kilometre Array (SKA) radio telescope. This R17-billion ($2.2-billion) cluster of telescopes will be 50 times more sensitive than any other radio instrument on earth, powerful enough to improve scientists’ understanding of the origin and evolution of the universe.

Cilliers explained that South Africa made the SKA shortlist because its proposed location for the telescope, in the dry and deserted Northern Cape province, is one of the few places on earth offering large unpopulated areas free of human-created radio interference. The final decision on which country will host the telescope will be made in 2011.

Martinez said any development in telescope technology would be good for South Africa’s economy. “The technology that underpins the modern space science industry – such as computing and electronics – will be introduced to the country,” he said. He firmly believes that South Africa is more than ready to become a full participant in this industry.

Traditionally there has always been a focus on developing infrastructure such as roads, railways and bridges, but telescopes will introduce new technology to the country, technology crucial for the development of what he calls an “information society”.

A space industry could support a community of people pursuing careers in science, technology and engineering. Furthermore, it will also spur research and the development of related industries.

Cilliers said that one of the most important benefits of a space programme, and more specifically the satellite component, is a growing interest in science-related careers. “The inspirational value of a space programme is so significant. Science is often perceived as being boring, but this will get young people excited about careers in this field,” he said.

Developments in satellite technology, astronomy and other related industries would therefore help to address South Africa’s skills shortage. The country has a significant shortage of maths, science and technology expertise.

In January, at South Africa’s launch of the International Year of Astronomy 2009, then Minister of Science and Technology Mosibudi Mangena highlighted the country’s shortage of maths, science and technology graduates, adding that ignorance of the importance of these fields contributed to the deficit.

Cilliers added that as more people begin to show interest in these careers, the country would be able to grow its human capacity in this field. Without this, innovation and associated industrial development cannot take off, he said.

What the future holds

There have recently been some encouraging signs that government is serious about its participation in the space industry.

In January the National Space Agency Act (PDF), which lays down provisions for establishing such an agency by 2011, was signed into law. Both Nasa and the Russian Federation’s space agency have reportedly been showing more interest in South Africa.

In his speech, Mangena noted that legislation had been passed to protect areas that are well suited to optical and radio astronomy. He added that South Africa is Africa’s technological leader and has a responsibility to use its position to the continent’s benefit.

Pandor has also expressed interest in investing in infrastructure such as launch facilities. According to Cilliers, South Africa currently has a basic launch pad and related facilities at a site in the Northern Cape, near Bredasdorp, and a number of test launches have already taken place there.

This technology could potentially be developed further to enable the launching of satellites, which would place South Africa among the few countries capable of sending their own rockets into orbit.