A group of students and lecturers from the University of Johannesburg, a solar car, and a deep passion to spread the word about green technology and the wonders of engineering, are on an epic road trip from Joburg to Botswana, via Namibia. The children were excited to see the solar car. Nickey Janse van Rensburg said wherever they stopped even though communities don’t have much, they are passionate about living sustainably and embracing green technology. (Images: Supplied)

A group of more than 20 people has driven over 5 000 kilometres from Johannesburg, en route to Botswana, with a simple mission in mind: promote green technology

Using a solar car as the main vehicle, this team aims to spread the word about green technologies, every time they make a stop on their 12-day trip, which began on 18 June.

This is the second solar-powered car designed by students at the University of Johannesburg. The purpose of their trip, which is going via Namibia, is to build awareness about the solar car and how it works, as well as to speak to people about the importance of green technologies in engineering studies.

Nickey Janse van Rensburg, a mechanical engineering science lecturer and the UJ Energy Movement programme manager, told the news group Engineering News that the solar car could reach a speed of 140km/h. On days when there was not much sun, the top speed was 90km/h, she added.

Janse van Rensburg said the Ilanga II could even be plugged into a wall like a mobile phone, if needed, to charge.

Warren Hurter, the Team and Technology Manager of the Energy Movement programme, is one of the three drivers taking turns at the wheel on the test run. He explained that the solar panels on top of the vehicle converted the energy from the sun into power in the battery packs. The driver is the only person in the car at any one time.

Speaking to UJ Observer TV, the university’s news team, Hurter explained that the car was initially built for the SASOL Solar Challenge, a 5 000km race. The project started in 2011. “Instead of doing our final year paper design project, we decided to build our project – our solar car. So we went out and spoke to some industrial designers to help us.”

A lot of research went into the solar car – especially in terms of electronics and mechanical components – he said.

On 23 June, Janse van Rensburg confirmed that they were on their way to Swakopmund and Walvis Bay. “We attempt to drive Ilanga as much as possible, but on occasion, road conditions or time constraints require that we load Ilanga into the truck to reach our next destination.

“On average, we drive the car about 100km per day, but the next three days are dedicated to driving the car as much as possible, until the next public lecture in Gaborone.”

Janse van Rensburg said the team was showcasing Ilanga II and hosting public lectures. “The UJ Energy Movement aims to share their experiences with schools, students, researchers and people who are interested in pursuing a career in the fields of science and engineering, specifically relating to alternative energy.

“The public lectures are designed to facilitate the information sharing as well as viewings of the car and the opportunity to ask questions directly to the team. The public lectures have taken place in Kimberley, Upington, Windhoek and Gaborone,” she said.

“These events also serve as a call to action to students, to inspire them towards initiating similar programmes and to motivate them towards a career in the science fields.”

The media team keep the Facebook page updated with photographs to engage and inform the public about their journey. Stopped at a garage, the question was posed: “What is this solar car doing at a petrol station?”

Then photographs showed the car getting some serious attention from the public.

The team shared some of their experiences on social media:

About the stop at the petrol station, Janse van Rensburg said: “[We were] showing off a little bit, filling up the convoy, getting the community excited about our presence, and refuelling the driver who unfortunately, is not solar powered.”

Their biggest welcome so far was in Groblershoop. “Meeting the thousands of kids at Groblershoop and seeing how excited they get seeing Ilanga for the first time is really exciting. In this community, even though they don’t have much, they are passionate about living sustainably and embracing green technology.

“We’ve met such diverse communities and different people – from government officials and ministers, school kids, rural towns, et cetera. [There have been] chance meetings on the side of the road where literally hundreds have gathered in minutes to see the solar car and the reaction is always the same – lots of excitement and lots of curiosity.” 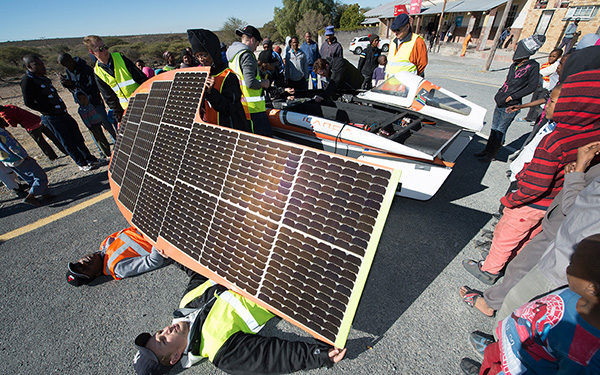 The team’s preparation and maintenance procedures consist of a morning and evening check of each and every component, nut, and bolt. Driver and vehicle safety are of utmost concern to the them.

The team was, as far as possible, attempting to mimic race conditions and refine preparation and maintenance procedures, Hurter said. “This consists of a morning and evening check of each and every component, nut, and bolt. Driver and vehicle safety are of utmost concern to the team, and hence we check the car stringently before any driving is done.”

Time management was another concern, as well as ensuring they actually drove as many kilometres as they set out to do. “Seeing as we have a fairly new team, attempting to nurture cohesiveness and unity, and the ability to act as a singular unit has pushed the students up a steep learning curve, but this always expected and was one of the objectives of the trip.

“The team is getting better and sharper every day, and exceeding our expectations – although cold nights and colder showers at camp have probably been a bigger challenge!”