The heart of the SKA, consisting of a
phased array which will be able to observe
the whole sky, surrounded by a compact
arrangement of small dishes.
(Image: Jodrell Bank Astrophysics Centre) 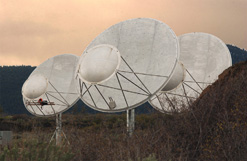 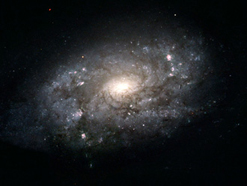 The SKA will unlock some of the long-held
secrets of the origin of the universe.
(Image: NASA archives)

South Africa and Australia are the only two countries left on the shortlist to develop the most sensitive and advanced telescope in the world – the Square Kilometre Array, or SKA. Further studies of the two contending sites are currently underway and a decision on the project, which will cost about R20-billion, is likely to come in 2008.

Once the host country has been named, it is expected that construction on the first stage of the telescope will take place between 2011 and 2014. The SKA will be ready for full operation by 2022.

South Africa’s preparations are gathering pace. In March 2008 the team took possession of 14 000 ha of land in the Karoo, Northern Cape, for the proposed location of the core of the array. Further developments include the imminent signing into law of the Astronomy Geographic Advantage Bill, which has received final approval from the National Assembly in Parliament. Once passed the bill allows the minister of science and technology to declare a 12.5-million ha portion of the Northern Cape province as a reserve that is radio frequency-free across all wavelengths.

By January 2009 it is anticipated that an on-site facility here will be up and running, followed shortly by the installation of power and fibre optic networks. The main control centre, located in Cape Town, will go live in December 2009.

A conference held in Johannesburg in April 2008 saw engineers and scientists from all over Africa coming together to give further impetus to the bid, which will be a scientific boost not only for South Africa but for the entire continent. This follows a conference in Australia earlier in the month, where the preparatory stage of the SKA project, known as PrepSKA, was launched. South Africa presented a report on its bid progress, which was reportedly well received by delegates, among them representatives from international funding agencies as well as government officials, industrialists and scientific professionals.

South Africa has also conducted talks with neighbouring countries to bring them in as hosting partners on the SKA project, at the same time giving them the opportunity to initiate relevant science programmes at home. At the recent Johannesburg conference the countries agreed in principle to enter into bilateral programmes relating to SKA with South Africa, including the mutual development of skills and technology.

Meanwhile the international scientific community is gearing up to collaborate in the development of the mega-scope, which will consist of more than 3 000 individual dishes with a total receiving area of approximately one million square metres, or one square kilometre. Analysis of all the data pouring in will require powerful computing and super-fast data networks.

SKA is expected to help astronomers understand the Dark Ages, the period during the universe’s formation when only gaseous forms existed, before stars and galaxies took shape. The Dark Ages existed from about 300 000 to one billion years after the so-called Big Bang, and it was only towards the end of this period that young galaxies began to form. What happened in between remains a scientific mystery.

Current technology struggles to pick up the radio signals emitted during this time because they are so faint. The SKA, with its highly sensitive antennae and receiving area that is one hundred times more extensive than the largest receiving surface in existence at the moment, is designed to answer these scientific questions. By studying the properties of the first luminous objects in the universe SKA will be able to provide hitherto unknown details about them.

Project leader Dr Bernie Fanaroff described the SKA as having the capability to provide an image of the universe as it was 14 billion years ago. “SKA is the world’s biggest ICT project,” he said.

A southern hemisphere location for SKA

South Africa’s bid is one of four submitted in December 2005. The other three came from Australia, China, and Argentina/Brazil, and were evaluated by the International SKA Steering Committee (ISSC). Physics professor Justin Jonas of Rhodes University is South Africa’s representative on the panel.

South Africa came in as a late bidder but, says Science and Technology Minister Mosibudi Mangena, the country has excelled itself in becoming one of the two shortlisted candidates. The location for the central core of the array will be in the Northern Cape province, with outer stations extending away from it in a spiral pattern. “If the SKA is built in South Africa, the face of the Northern Cape will be transformed, and the province will have the opportunity to become a centre of high-tech expertise,” says Mangena.

According to SKA South Africa, the country is in a strong position to secure the bid for a number of reasons. It is still cost-effective for overseas companies to invest in South Africa, with its comparatively cheap electricity and affordable labour. There is a strong network of infrastructure such as roads and communication, much of which is already in place.

The geographical location is ideal, with a dry climate, ample coverage of the sky and minimal interference from sources such as mobile phones and air traffic.

South Africa’s academic resources to support the SKA are excellent, and with other important related sites such as the Southern African Large Telescope at Sutherland in the Karoo, and the HESS gamma ray telescope in Namibia, the region is making a name for itself as a player in the field of astronomy.

With the SKA located in South Africa, high-level skills in this field will be needed. The Department of Science and Technology, from as far back as 2006, has made funding available for graduate study specifically centred on the SKA and its component, the Karoo Array Telescope (KAT), affectionately known as MeerKAT. A meerkat is a type of mongoose that belongs to the species Suricata suricatta. The name is Afrikaans and means marsh cat, although they are neither cats nor marsh-dwellers but rather live in dry regions of Southern Africa.

South Africa will become a major centre for fundamental physics, astronomy and engineering, says Mangena, attracting the best scientists and engineers in the world. This will contribute more momentum to the development of skills and expertise in the field, giving South Africa the ability to contribute to the global knowledge market.

Not many countries are suited to host the SKA because the core of the array must be located in a suitably remote area so that transmissions from televisions and mobile phones, which fall into the same frequency band, won’t interfere with the reception – 100 km of radio signal-free space all around is the minimum requirement.

In addition, the array cannot be situated between 25o N and 25o S. This excludes almost the entire area of the earth between the Tropic of Cancer, which lies at 23° 26′ 21″ N, and the Tropic of Capricorn which lies at 23° 26′ 21″ S. In this region, known as the tropics, the ionosphere – the uppermost part of the atmosphere – is particularly sensitive to variations in the sun’s light and electromagnetic radiation passing through it is more likely to be disrupted. This phenomenon is caused by the equatorial electrojet, a moving band of electric current that flows in an easterly direction around the equatorial region of the ionosphere during the day.

The core also needs to be conveniently close to major centres. Finally, the array must be positioned away from the earth’s poles so that it can cover a large enough portion of the sky.

The SKA South Africa array will cover most of Southern Africa. The core and its surrounding central sites will extend in a radius of 150 km around it, with remote sites situated further than 150 km. Some of these are as far afield as Madagascar, Mauritius, Namibia, Botswana, Zimbabwe and Zambia, with one each in Kenya and Ghana.

South Africa has already embarked on the road to SKA with the construction of MeerKAT near Carnarvon in the Northern Cape. MeerKAT is a SKA prototype which cost almost R900-million to develop. Consisting initially of a single dish built at the Hartebeesthoek Radio Astronomy Observatory in Gauteng, the second stage is now in development. This is the KAT-7 with seven 12 m dishes, and the final stage, likely to be commissioned in 2009, will consist of 80 such dishes when completed in 2012.

MeerKAT will be developed into the SKA, should South Africa receive the green light for the project. The facility will boast cutting-edge technology which will enable it to explore such unknown factors as dark matter, and the evolution of galaxies.