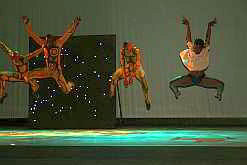 The play African Stars looks at the
origins of astronomy in Africa and
its influence on people. 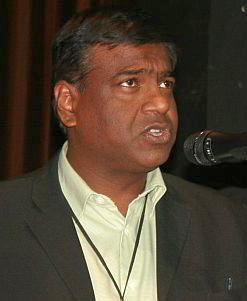 DST deputy director-general Dr Val
Moonsamy said we take many things for
granted that have, in fact, a rich scientific
background. It is through research that
humanity is able to better understand
nature and the universe.
(Images: Ray Maota) 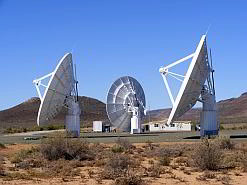 Three of the seven dishes that make up the
Kat-7, which is the first phase of MeerKAT.
(Image: SKA)

Full Moon Fever (FMF) is about to grip South Africa as the Department of Science and Technology (DST) drums up national support for the country’s bid to host the Square Kilometre Array in Southern Africa.

When complete, the Square Kilometre Array (SKA) will be the world’s most powerful radio telescope. It will help answer fundamental questions in astronomy, such as the state of the universe before the first stars formed, and will need a budget of R16-billion (US$2-billion) to build.

The DST’s new campaign was launched at the South African State Theatre in Pretoria on 14 November 2011 with a play titled African Stars.

Gallant thanked those present for attending the production of African Stars. “It is our intention as the State Theatre to share the rich stories about African astronomy, while also promoting the country’s bid to host SKA.”

The play is narrated by a cast member while the others dance and do astrological formations. It seeks to educate people about the origins of astronomy in Africa and how the science has impacted people and history.

It also focuses on the San’s well-documented fascination with astronomy, an interest that is still evident today through ancient rock art. The San are a group of southern African Bushmen believed to be one of Africa’s oldest people.

It goes on to explain that the building of the Pyramid of Giza in Egypt was built on astronomical alignments, and ends with an account of the benefits of SKA for South Africa and the African continent.

Moonsamy said: “Many things that we have come to take for granted have, in fact, a rich scientific background. It is through the aid of research that humanity is able to gain a better understanding of nature and the universe.”

The campaign will see FMF events taking place on the Friday or Saturday closest to the full moon of each month; science and technology career exhibitions organised by the Tshwane University of Technology and the University of South Africa; and a nine-province tour of the African Stars production.

South Africans are also urged to place messages of support for the bid on the SKA website.

The bid to host SKA

The bid to host the SKA project is a two-horse race between South Africa and Australia.

The hosts will be announced early in 2012 – meanwhile South Africa is going all out to show that Africa is an emerging global hub for astronomy.

Minister of Science and Technology Naledi Pandor said in a statement read by Moonsamy: “South Africa has come of age when it comes to astronomy capacity and capabilities. Our infrastructure and human capital development investments in space science and technology have ensured that our country is counted among the best in the world.”

Pandor also said that with the technology involved, the hosting of SKA will propel Africa into the 22nd century and drive economic development across the continent.

In preparation for SKA, South Africa enacted the Astronomy Geographic Advantage Act of 2008 to provide for the preservation and protection of areas within the country that are uniquely suited for optical and radio astronomy.

Pandor said: “The establishment of the space agency is a welcome development that has become an important vehicle for promoting our growing satellite industry and a wide range of innovations in space sciences, earth observation, communications, navigation and engineering.”

South Africa has already shown its space prowess with the Southern African Largest Telescope (Salt) and the Karoo Array Telescope, which is the first phase of the MeerKAT.

Salt is located near Sutherland, about 370km northeast of Cape Town. It’s the largest single optical telescope in the southern hemisphere and among the five largest in the world.

According to its website, Salt can detect the light from faint or distant celestial objects that are a billion times too faint to be seen with the unaided eye.

The MeerKAT is the precursor to SKA and is under construction in the Karoo in the Northern Cape. Although the first phase with seven satellite dishes – KAT-7 – is complete and operational, the project will end in 2016 with 64 dishes.

The MeerKAT has already proven to be an astronomer’s dream with scientists around the world booking the facility for research time. A total of 43 000 hours has already been allocated to interested radio astronomers.

As the SKA precursor, the MeerKAT comprises the same technology. It uses a technique called radio interferometry, which is the production of high-resolution images using a cluster of smaller telescopes rather than one large instrument. The more telescopes in the cluster, the higher the resolution obtained and the better the result.

Pandor said: “Hosting SKA will change our economic fortunes and I reckon Africa will host it.”