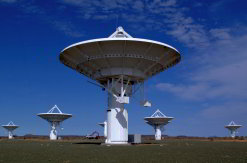 The seven dishes of the Kat7 array, now
complete, form the first phase of the
MeerKAT radio telescope in the Karoo 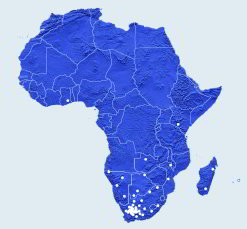 The SKA will extend over much of Southern
Africa, and involve extensive regional
cooperation.
(Images: SKA South Africa)

According to SKA South Africa, the proposed site in the Karoo for the core of the Square Kilometre Array (SKA) is one of the quietest places on the planet.

The low levels of radio frequency interference (RFI) found in the area, confirmed during a recent investigation by the SKA international consortium, make it an ideal location for the sensitive instrumentation.

He said that at that time the low occurrence of RFI was a big advantage for the South African bid, and that improvements have been made since then to address a couple of issues that were raised.

Initially the team picked up some interference from existing communications infrastructure, but this has since been dealt with.

There is no likelihood of new problems after the enactment of the Astronomy Geographic Advantage Act of 2007, which requires that the whole of the Northern Cape province remains advantageous for astronomy and that infrastructure development is regulated. The Sol Plaatje Municipality and its main town of Kimberley is the only exception within this area.

Cooperation between SKA South Africa and the country’s communications and broadcasting sector will ensure that new technology will comply with the act.

The proposed SKA site also counts a mild climate with little chance of atmospheric disturbances among its advantages, as well as a well-established connection to the national grid. This system has been designed to eliminate RFI while providing reliable and cost-effective power.

Meanwhile an international group of radio astronomers has just given the MeerKAT, also located in the Karoo, the stamp of approval.

The precursor to the SKA, the MeerKAT is a 64-dish array that, when complete, will be the most advanced radio telescope in the southern hemisphere, only to be surpassed by the SKA itself when it becomes fully functional in 2024.

The astronomers, from Australia, the UK, US, Netherlands and Chile, gave the MeerKAT a glowing preliminary design review, following its successful initial concept review in mid-2010.

The review group gathered in Cape Town in July 2011 for the latest assessment, which encompassed the design of the array, its risk potential, compliance with user requirements, and the system engineering development process.

They commended the South African team for its thorough approach to the MeerKAT’s infrastructure design.

SKA South Africa director Bernie Fanaroff said that the positive review is confirmation of the quality of the country’s scientists and engineers, and associated industries.

The site selection process is now well under way, and the long-awaited decision is due in early 2012. South Africa and Australia are the two short-listed candidates.

The international SKA board of directors revealed the final timeline for the selection process.

“Selection of the host site for the SKA will be made in terms of characteristics for the best science,” said SKA director Richard Schilizzi, “as well as the capability and cost of supporting a very large infrastructure, taking the political and working environment into account.”

Because factors to be considered in the selection of the site include RFI levels, the long-term sustainability of a radio quiet zone, and the site’s physical aspects, South Africa is thought to have an edge in this regard.

Between March and September 2011 the two rivals will submit information to the SKA’s head office in Manchester, UK, after which a team of independent analysts will scrutinise the data.

In November and December 2011 the SKA site advisory committee will evaluate the results and make a recommendation, which will be received by the SKA board of directors in January 2012.

The successful host will be announced the following month.