The KAT-7 radio telescope array is
operational and has produced its first
images.

The SKA site, near Carnarvon in the
Northern Cape, is in the middle of
a proclaimed radio astronomy reserve. 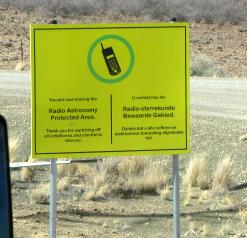 No mobile phones or other electronic
devices are permitted in the reserve. 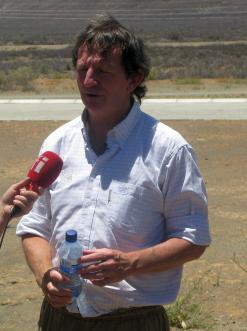 South Africa is one of two finalists bidding to host the Square Kilometre Array (SKA), and with its rival Australia is awaiting the recommendation of the SKA Site Advisory Committee, due in February 2012.

But whether or not the US$1.9-billion ($15.9-billion) project goes ahead, the local astronomy sector has already made huge strides.

Speaking in Cape Town in December, South Africa’s deputy science and technology minister Derek Hanekom said that the SKA project has got the country’s brightest young minds excited about astronomy.

Hanekom added that the SKA is a major catalyst for human capital development in relevant fields, and with over 300 bursaries already awarded to students from around the continent, has been a scientific boon for South Africa and other African countries.

“With the equipment already developed and built, South Africa has proven its scientific capability,” he said, “and has shown that it is a country that can play a pioneering role in science.”

When complete, the SKA will comprise some 3 000 radio antennae, spread out over a vast area of Southern Africa. South Africa will host the core of the array, comprising about half the dishes, and it and eight partner countries in the region will accommodate the remainder.

The first astronomical observations, expected in 2019, will help to answer long-standing questions such as the formation of the universe; why it’s expanding; the possibility of life on other planets; and the mystery of dark energy and dark matter.

At the isolated Northern Cape site which has been set aside for the SKA, an array of seven dishes is already operational – this is the Karoo Array Telescope, or KAT-7.

A ground-breaker in its own right, KAT-7 is the first radio telescope to consist of fibreglass dishes.

These were produced on-site from a mould, and the same manufacturing facility will be expanded to accommodate the larger MeerKAT dishes, using local ingenuity and skills.

MeerKAT is Afrikaans, meaning “more KAT”, but is also the name of an endearing little mongoose-like mammal that is indigenous to the Northern Cape and other Southern African regions.

When completed in 2018, MeerKAT will be among the five largest radio telescopes in the world.

Hanekom stressed that the MeerKAT construction will go ahead, whether or not the SKA is awarded to South Africa.

“Great astronomy work will be done, with or without the SKA,” he said.

Hanekom also said that the knowledge that has already been amassed is invaluable, and that the project has given rise to a new generation of scientists. The unprecedented scientific opportunities are expected to keep South African talent in the country, and attract expertise from overseas.

The KAT-7 has caused much excitement in the local astronomy community with the capture of images of the Centaurus A galaxy and its associated black hole, located 14-million light years from Earth.

But scientists are looking further ahead, and are queuing up to book research time on MeerKAT, which will be the largest radio telescope in the southern hemisphere. Already five years’ worth of observation time have been allocated to ten research projects, ranging from a study of radio pulsars to a high-frequency survey of the galactic plane.

Professor Justin Jonas, SKA associate director for science and engineering, and head of Rhodes University’s physics and electronics department, is excited about the opportunities that lie ahead.

He said that astronomy has been identified by the government as one of the fields in which South Africa is likely to succeed, because of geographic, natural and knowledge advantages.

“We must have aspirations for cutting-edge science,” he said, “or we will always be viewed as a second-class nation.”

Jonas said that South Africa’s government is wholly committed to the SKA and its related projects. The African Union has also stated its support for the project, and it is hoped that this will be one of a number of factors that gives South Africa an edge over Australia.

The government has declared the entire Northern Cape province to be an astronomy advantage area, through the Astronomy Geographic Advantage Act of 2007. The only exemption is the Sol Plaatje Municipality, which encompasses Kimberley.

Within the province, an area of 12.5 million hectares was proclaimed a radio astronomy reserve, and anyone entering must switch off their mobile and other electronic devices. Survey results show that the reserve is one of the quietest environments on earth, in terms of radio frequency, for radio astronomy. This makes it an ideal location for the sensitive SKA.

The legislation means that any development that might interfere with the reception of radio signals must first be carefully considered.

This high-level support has enabled South African scientists to leap ahead of their international colleagues in areas such as rapid prototyping.

“For example, with our dishes we can now go from an engineering diagramme to an on-site antenna in less than a year,” said Jonas.

Innovations in astronomy, he said, are helping to drive development in other industries.

He mentioned another significant South African achievement – the second-generation Roach board, designed and produced locally.

Roach is the reconfigurable open architecture computing hardware board that can be adapted to all kinds of digital signal processing requirements, including medical or telecommunications applications.

“Roach 1 is now being used in every radio telescope in the world,” said Jonas. ”It can replace an entire rack of computers, and use a twentieth of the energy.”

Because the development team has released the Roach design under an open source licence, the plans can be freely downloaded and used for an increasing number of applications, while the international development community grows.

“The software is the key to getting the most out of Roach,” said Jonas.

The KAT-7 uses Roach 1, but MeerKAT will most likely use Roach 3. Roach 1 was developed in collaboration with engineers from the University of California, Berkeley.