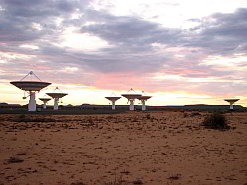 A specialist team is now commissioning
the KAT-7, or MeerKAT precursor. 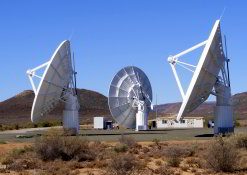 Although a prototype, the KAT-7 has
attracted interest from scientists all over
the world.

The KAT-7 array stands in a remote
area, known for its radio stillness, of the
Northern Cape province.
(Images: SKA South Africa)

With about 3 000 receptors linked together and a total collecting area of 1 000 square metres, the Square Kilometre Array (SKA) will have 50 times the sensitivity and 10 000 times the survey speed of the best current-day radio telescopes.

With global investment supporting the project and astronomers and engineers around the world already working on its design, construction on the SKA is scheduled to start around 2016. The first astronomical observations are expected by 2019 and the telescope should be fully functional by 2024.

South Africa, currently competing with the Australia / New Zealand collaboration to build and host the world’s most powerful radio telescope, is at an advanced stage of project development.

“At first nobody took us seriously,” said SKA South Africa director Dr Bernie Fanaroff, “but this project has changed the way the scientific community views our country, which is important in improving international perceptions of science and engineering in South Africa.”

The country has partnered with eight other African nations to strengthen its bid, and has received the full support of the African Union. Should it succeed, the telescope’s core will be located in a radio reserve in the Northern Cape province. This area is protected against future radio interference by the Astronomy Geographic Advantage Act of 2007.

Remote stations of about 24 antennae each will spread out as far as 3 000 km from the core throughout Namibia, Botswana, Ghana, Kenya, Madagascar, Mauritius, Mozambique and Zambia.

As the absence of radio interference will be one of the key considerations in the final host selection, the international SKA project development office commissioned a new series of ultra-sensitive radio frequency interference measurements, using two sets of equipment, at the two sites towards the end of 2010.

An external advisory committee will review the data and make its recommendations.

Additionally, building and operating costs will play an important role in the ultimate selection of the most suitable site. Construction costs are expected to be considerably lower in South Africa than in Australia.

In November 2011 an international site selection group will make a final recommendation on the best site for the SKA, following which the SKA board will announce its decision in mid-2012.

From the dark ages to extraterrestrial intelligence

“There is a strong science case for building the SKA, but, because there is so much about the universe that we simply don’t know yet, the telescope will most likely be celebrated for discoveries that we can’t even imagine now,” said Fanaroff.

By looking back in time approximately 13.7-billion years to the dark ages of the universe, the SKA will be able to provide detailed pictures of the cosmic web of neutral gas to unravel how the very first black holes and stars were formed. It will even be able to detect extremely weak extra-terrestrial signals and may pinpoint other planets capable of supporting life.

But none of this will be possible if skills are absent, and the development of expertise is a key part of the project. The SKA’s precursor, the Karoo Array Telescope or MeerKAT, currently provides the ideal breeding ground for this purpose.

“You can’t develop new expertise without a cutting edge project to work on,” said Fanaroff, “and MeerKAT attracts and excites young scientists and engineers because it is something entirely new and extremely ambitious.”

The MeerKAT is South Africa’s first interferometer – a telescope consisting of many linked dishes that all contribute towards the production of high-resolution images – and is driving the development of new skills within the astronomical community in South Africa and on the continent.

“The technologies developed for the MeerKAT and SKA will be commercialised in the next 10 or 20 years,” said Fanaroff, “which means that when that happens, our young people working on this project will be at the forefront, and will find themselves in high demand around the globe.”

Through its human capacity development programme, SKA South Africa funds students across a wide range of study levels, starting from young artisans, technicians and undergraduates all the way up to advanced post-doctoral studies. To date nearly 300 students have benefited from the programme’s bursaries and scholarships, including many from other African countries.

Most bursaries go to physics and engineering students and a special effort is made to attract women and black students to these fields through the undergraduate programme. Support for artisan training focuses on promising students studying at the Northern Cape Further Education and Training Urban College in Kimberley.

The SKA is expected to stimulate extraordinary advances in relevant technology.

“Astronomy always pushes the boundaries, because astronomers need the latest and most sensitive technologies, and then they typically advance it even further,” said Fanaroff. “We expect that the SKA will collect more data in a week than what humankind has collected in its entire history.”

He added that the amount of data that will flow through the SKA will be about 250 times more than the internet’s current total data traffic. Processing will require supercomputers working at exaflop speeds, about 1 000 times faster than today’s most advanced machines.

To meet deadlines, production of the thousands of dishes will have to accelerate, while taking into account that these are highly sophisticated and sensitive scientific instruments.

“We will have to use industrial methods to produce and put up several dishes per week – something that has never been done before,” said Fanaroff.

From KAT-7 to MeerKAT to the SKA

Once completed, the 64-dish MeerKAT will be the southern hemisphere’s largest radio telescope and one of the world’s biggest and most powerful telescopes. The Australians are also building a precursor instrument, the Australian SKA Pathfinder or Askap.

The first seven dishes – known as KAT-7 – of the local precursor instrument were completed by December 2010 and are now being commissioned under the guidance of Dr Debra Shepherd of the National Radio Astronomy Observatory in the US. The project will be handed over to scientists towards the end of 2011.

“We built and tested the systems in Cape Town, and then moved them to the site,” said Fanaroff. “Everything worked immediately, which sent out a strong message that our local team is world class.”

Although the KAT-7 is a prototype, it has garnered interest from scientists around the world, who are keen to switch it on as soon as possible.

KAT-7 has already delivered images of the Centaurus A galaxy, 14-million light years away.

Following an extensive review process, the design of the MeerKAT’s dishes has been finalised. It will consist of 64 Gregorian offset dishes, each with an effective diameter of 13.5 metres. This configuration provides heightened optical performance and sensitivity, excellent imaging quality, and good rejection of unwanted radio frequency interference from satellites and terrestrial transmitters.

“The offset dish design not only produces better science, but is also much closer to what the SKA dishes are likely to look like,” said Fanaroff. “We want to make sure that our dishes are as close as possible to what the SKA is going to use, so that South Africa’s industry will be well placed to bid for major SKA contracts as soon as tender opportunities are announced.”

The next step of the MeerKAT project is to build a single prototype dish of the new design on site in the Karoo. The existing production plant will be modified to meet the new specifications, so that MeerKAT dishes are still produced on site.

This first dish will be built close to KAT-7 to allow thorough testing of the performance of the new design against the existing array. The work will also feed into the international SKA Dish Verification Programme (DVP), an important component of the international SKA pre-construction phase.

Although MeerKAT will only be operational by around 2015, the world’s radio astronomers are already lining up to use it. In 2009 the SKA South Africa project received 21 proposals for large survey projects, involving more than 500 scientists, 60 of them from South Africa. These proposals were reviewed, refined, and about 43 000 hours of observing time have been allocated to 10 teams.