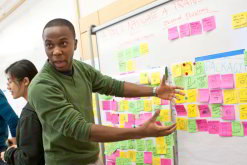 Seen here during a class at Harvard,
Siyabulela Xuza is one of the new young
generation of Africans who are committed
to developing the continent’s potential.
(Image: Harvard School of Engineering
and Applied Sciences)

Engineering whizzkid Siyabulela Lethuxolo Xuza is a young man with a big future.

From the early days of experimenting with science in his mother’s kitchen in the poor community of Mthatha in the Eastern Cape, to international science and engineering accolades, he is now a role model for South Africa’s aspiring scientists.

These days the darling of Nasa, who were so taken with him that they gave him a personal guided tour of their facilities, is the youngest member of the Africa 2.0 energy advisory panel.

The pan-African organisation comprises the continent’s brightest minds and is committed to seeking sustainable solutions to challenges faced by Africans.

In a March 2012 interview with US television network CBS, Xuza said that his current work is focusing on transforming homes into power plants “that capture the energy of the sun during the day and store some of it in fuel cells, for use at night”.

In his own words, Xusa described the moment that sparked his lifelong passion for science.

“I was chasing the roar of a Cessna plane dropping election pamphlets over Mthatha, my South African township,” he wrote on the America.gov website.

“It was 1994, the first year of a new democracy in my country, and the sight of that technological marvel ignited in me a curiosity for science and a passion for using technology to engineer an African renaissance.”

He was just five years old at the time. The youngster was also later inspired by South African entrepreneur Mark Shuttleworth’s trip into space in 2002, an event that was largely responsible for his long-standing interest in rocketry.

His mother’s kitchen soon became the scene for much experimentation with formulations of jet and rocket fuel, but the informal laboratory had to be moved to the garage after a sticky incident with a too-hot stove.

Xuza wasn’t deterred, and over the next few years he continued to work on the project, which culminated in the successful launch of a real home-built rocket, the Phoenix. This vehicle achieved a final height of over a kilometre and earned him the junior South African amateur high-powered altitude record.

The rocket was propelled by Xuza’s own invention, a cheaper, safer type of rocket fuel, which became the subject of a project titled African Space: Fuelling Africa’s quest to space. It won a gold medal in the 2006 Eskom National Science Expo as well as a trip to the Nobel Prize ceremony in Sweden, where he presented his work to the Swedish king and queen.

The same project took him to the 58th Intel International Science and Engineering Fair in Albuquerque, New Mexico, as part of Team South Africa.

Here the project was entered in the energy and transport category and won the 18-year-old, then a matric pupil on a scholarship at St John’s College in Johannesburg, a Best of Category award and a First award.

Xuza also received the honour of having a celestial body named after him by the MIT Lincoln Laboratory, which is replacing the complicated scientific names of thousands of minor planets with more accessible names in honour of the world’s top achievers.

The minor planet 23182 Siyaxuza circles the solar system in the main asteroid belt near Jupiter and takes 4.01 years to complete a single orbit. It was discovered in July 2000.

Xuza has garnered numerous other accolades, including a fellowship in 2010 of the African Leadership Network, and in 2011 he was made a fellow of the international student-run Kairos Society. Membership to this global body is by invitation only.

Matriculating in 2007 with a string of As, it was almost guaranteed that Xuza would take up further studies at a prestigious institution – that turned out to be Harvard’s School of Engineering and Applied Sciences, where he became one of just 1 948 students accepted out of about 28 000 who applied.

He started his engineering degree in September 2008, but wasn’t afraid to take up academic challenges such as debating, the Mandarin language, and world music. These interests, he said, would broaden his mind.

The young man from the Eastern Cape also joined the Harvard Forum for International Leadership, a society that brings together students from all around the world to discuss global issues such as HIV/Aids, terrorism and the development of emerging economies, as well as the need for efficient energy solutions.

“I may not be able to predict what the future holds,” he wrote on www.america.gov, “but I am excited at how my engineering education will enable me to achieve my aspirations for Africa.”